Home About Archive Contact
A TGB READER STORY: Sexist Behavior in the Elderly Male
Old Age Really is Not for Sissies

When I was a kid growing up in Portland, Oregon, a regular day trip was a drive to Multnomah Falls. Except for a lovely stone lodge with a good restaurant featuring local food, fish and wine it's almost as pristine it has been for thousands of years.

The Falls are about an hour's drive east from Portland and on Thursday last week, my new family – son Tom, his wife Kathy, their son Henry, Kathy's father Hank and I made the excursion that both Hank and I recall doing during our childhoods in Portland.

If you're new to this blog, you might not know that my son and I met via a DNA testing website about a year and a half ago. If you're interested, the story of how that came about is here.

No trip to Multnomah Falls is complete without a first stop in the Columbia River Gorge area at the Vista house.

Here is a short video (meant for bike riders but shows off the area nicely) which gives you a good idea of the woodsy area and Vista House high above the Columbia River with Washington state on the other side.

The Vista House has been on that promontory since 1918 and you can read about it here.

This is one of our photos, taken by Hank, outside the Vista House – me, Tom, Kathy and Henry. Hank's operating the camera phone. Before we get to Multnomah Falls, a recent history: In the late summer of 2017, the Eagle Creek forest fire threatened Multnomah Falls. Luckily, it escaped damage but not the scenic “old highway” that winds through a forest and had been closed for repairs after the fire. It reopened only a couple of months ago.

So we were happy to be able to visit again – Hank's and my separate memories of many family trips to Multnomah Falls when we were growing up guaranteed some nostalgia was involved for the two of us old folks.

Here are Kathy and Henry with part of the Falls behind them: 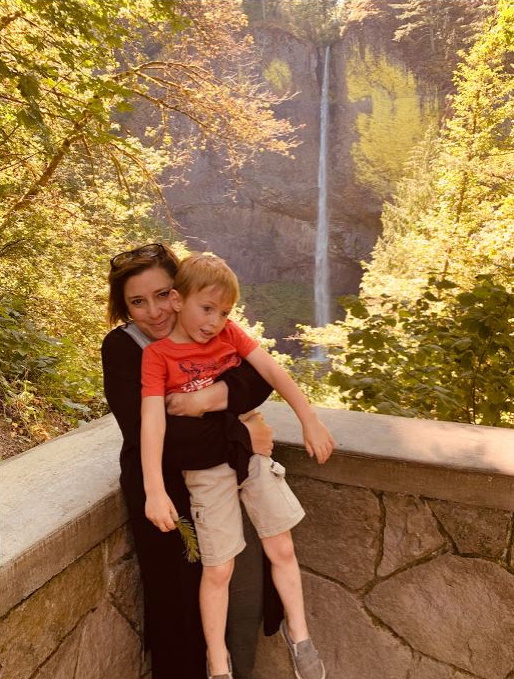 And here are Kathy, Henry and Hank in front of the Falls. 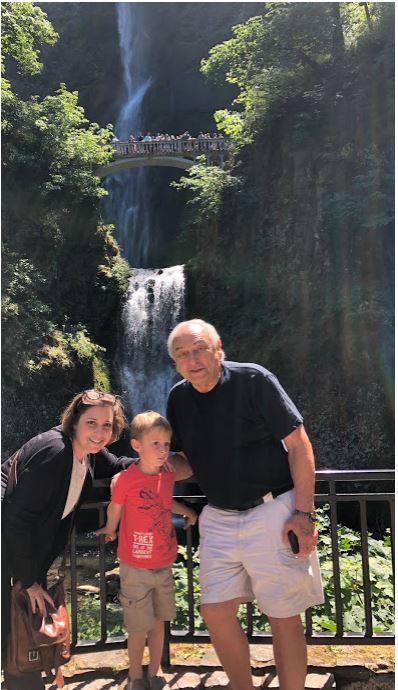 It was difficult for me to walk that day due to the pain problems I've been having so I didn't get as close to the falls as I like to, but the rest of the family did and I enjoyed them seeing it for the first time.

Then we had lunch at the lodge before heading home. It had been a beautiful, sunny day and it was lovely to spend it with my family.

Here's a short video Paras Suri made of Multnomah Falls early in the morning before visitors had arrived. It's the best video I've seen of it.

There is a Wikipedia page for Multnomah Falls and more practical information here.

How beautiful it is! I've been recalling my one trip to the West Coast with some longing lately. And it gives me joy to read you writing "my family."

So happy to hear about your trip to Multnomah Falls! Dave and I left the 115 degree desert in Phoenix to spend 2 lovely weeks driving a loop from Spokane WA, through Idaho and Glacier Park, Montana and up into Banff/Lake Louise then to Kootenay Lake, BC. So healing!

Such a beautiful place; a true jewel of the Northwest. We travel up the gorge from E Washington and get so excited as we pass through The Dalles and the evergreens begin appearing on the coming hills. After that the beauty just increases, Vista House, the old highway, Multnomah falls and the views of the Columbia River. Heaven.

So glad that you had this beautiful day in this beautiful place with your family. And the video at the end was lovely, with all its invigorating sounds and views. Thank you sharing all this loveliness and happiness with us this morning.

Vista House was one of my favorite destinations when I was growing up in Oregon in the 40's and 50's. I loved feeding coins into the hi-powered binoculars and enjoying the views. . .Glad you were able to share with your family.

Love the photography, especially of your precious family. I miss the Northwest when viewing these. Used to drive this route from western Idaho so many times it nearly put me to sleep til the beauty lands on the eyes and refreshes the senses.

Keep on rollin', Ronni (yes, it's supposed to be 'rowin', but I'm old and feel fine making up my own versions.)

I too was happy when I read the words, "my family." I'm so glad you were able to spend such a beautiful day with them.

Sadly, the binoculars are no longer there. We asked about them: they were broken so frequently, they just took them all out.

Simone...
Heh, I thought the it was supposed to be "Keep on rollin'". I'll stick with it too.

My son moved to Portland in April and I look forward to visiting him next year. I am enjoying his posts of the beautiful areas that he is exploring and will mention this area to him to visit. Thanks for sharing and what a wonderful day you had with your new family. Good memories to build for all of you. Blessings to you Ronnie.

I have never been that far north and west, but I hope to visit there someday. I am so happy for you that you met and get to spend time with your son and his family. How special that must be!!

Great photos and memories for you. So happy you got this opportunity to reconnect...

The "Keep on....whatever" phrase perhaps depends on our points origin .

Growing up in Northern Idaho's logging and mining towns I only knew the phrase as "KEEP ON TRUCKING'"... some of the 3 trailer rigs seemed as big as freight train to a child.

Any fellow game enough to get up before dawn and get his rig first in line for a load of logs earned the reputation of "Wolf Truck", because he could circle back and get a second load at the end of the day. I think my competitive young brother, with his 1st (second hand) truck considered it a compliment. Maybe , maybe not.... :-)

Just a point of interest...The beautiful Columbia River gorge is truly in recovery from that devastating fire. You can find more information on the Friends of the Gorge website

What a sweet and beautiful post – sweet because of your photos with your new family and your memories of going to this area and beautiful because, again the pictures and the video. My late husband and I drove there in the early 2000s after flying to Portland to visit Powell’s Books. After stopping at Vista House, buying a mug and some cookie my husband broke his front tooth. It was a Saturday but we found a dentist who came especially to his office to repair the tooth – I always thought Oregonians were super friendly and caring after that.

Nothing soothes the soul and lifts the spirit like a trip into the great outdoors. I'm so glad you were able to do this, and even better, with your family. The beauty and peace will stay with you for a long time.

Beautiful in every way!

Oh, Ronni, seeing this post and the photos literally made me tear up with happiness for you...for the family time and the beauty and the memories, new and old! I, also, have strong connections to that area. Many years ago my maternal grandfather went to Portland on business, from the Midwest, was taken up the Columbia River Gorge, stood on Crown Point, looking at the amazing view, and decided that he was moving his family to Portland. My parents were married in the back yard of my mother's family home in the Eastmoreland neighborhood of Portland and spent their wedding night at Multnomah Falls Lodge. I have been up the Gorge many times and even hiked the trail to the top of Multnomah Falls once, back when I was young and spry (in my 50's).

Thanks for sharing your great visit with family and a wonderful site! Great photos too! I have just 4 states I haven't visited, and Oregon is one. So lovely.

I am so sorry that you are having pain, Ronni. I'm glad that it didn't stop you from enjoying a special time.

I am thrilled that you are getting to spend time with your grandson. He will remember this the rest of his life. Grandparents are so important in our life. I only had one and only saw her a few times, but how well I remember her. Your grandson will remember you, too, and tell his children and grandchildren about his grandma.

I am so happy you were able to spend a day with your family in such a beautiful place. Great memories for all.

My son has been living in Portland for about 7 years. We are from MA so the first time I visited, he took me to Multnomah along with a few other waterfalls. I have some great photos and a short video of my visit there. Due to height fear, I stayed off the bridge. I’m glad you had the opportunity to spend the day there with your family.

Whoever thought you'd be offering us happy family pictures! Multnomah Falls was the first place Rebecca insisted that we go when I visited her while she still lived in Portland.

What a wonderful post! Thanks for sharing that experience with us. I liked what Darlene said above:

I've only been there once, but the memory is imprinted forever with half a dozen or so other experiences from that trip ten or twelve years ago. The drive up the gorge and the waterfalls are the eighth or ninth wonder of the world in my book.

I'm so glad you've hooked up with your family. I think that genetic link adds another dimension to a person's experience. My seven year old grand daughter is back east right now on a sight seeing trip in Chicago and New York. She's been terribly excited about seeing the Statue of Liberty. I'm looking forward to hearing what she thinks about the big cities.