Another in the occasional "Singing With" series, this time it's B.B. KING. He hasn't sung with as many people as Willie Nelson, who is present today, but he's up there.

I imagine that everyone here (and many more who didn't make the cut today) would have jumped at the chance to perform with the blues master. I hope you like blues and soul because that’s what you’re getting today - with occasional jazz and gospel influences.

The most appropriate place to start is with the song Playin' with my Friends. On this one B.B. has the help of ROBERT CRAY. 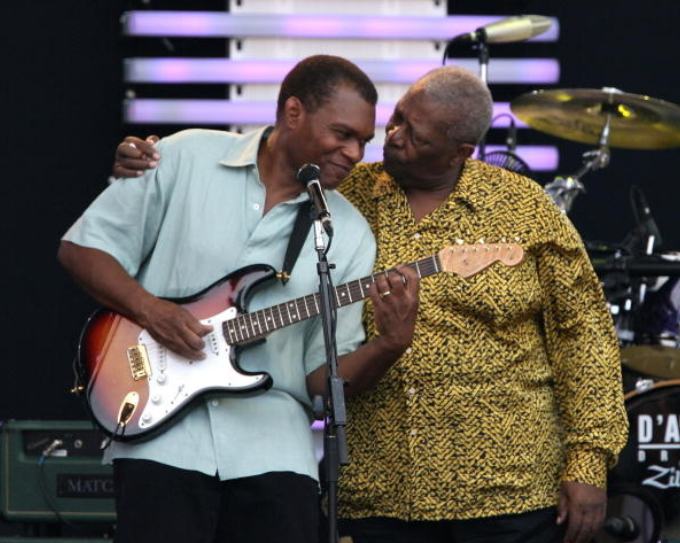 Robert is one of the newish breed of blues artist who bring elements of soul, rock, jazz and gospel into their playing. He’s an excellent guitarist and a pretty good singer as well. Here he is playin’ with B.B.

♫ Playin' with my friends

BONNIE RAITT is one of the foremost blues guitarists of her generation. 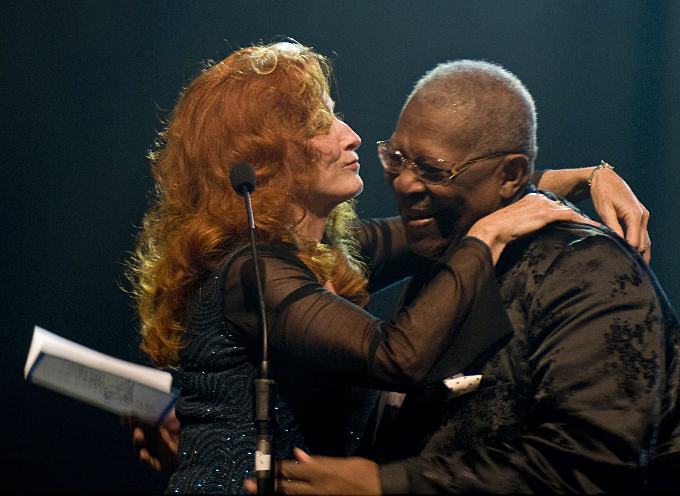 She’s also a fine singer and here she gets to demonstrate both skills with B.B. doing the same on Baby I Love You.

♫ Baby I Love You

Apart from B.B., JOHN LEE HOOKER was probably the last of that early generation who made the trek from the southern states to Chicago and plugged in their guitars (so they could be heard above the generally raucous crowds). 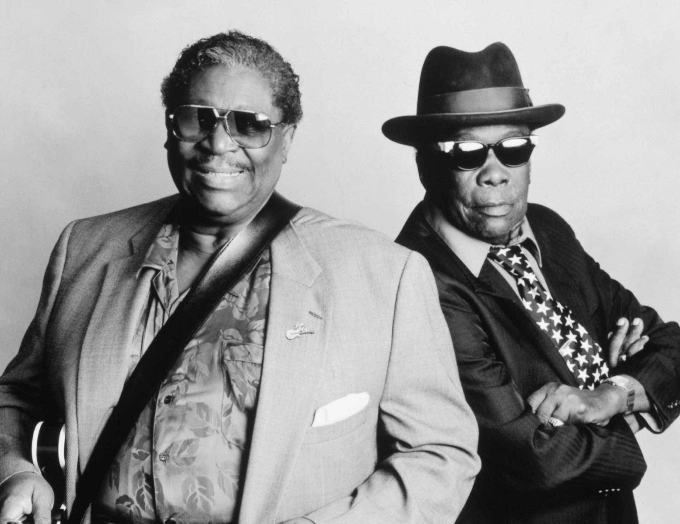 His style of singing and playing is quite the opposite of B.B.’s, but as with everyone today they work well together. The song is You Shook Me.

Michael Bloomfield and Eric Clapton (and some others) introduced B.B. to an earlier mainstream, mainly rock, audience. U2 performed the same function for the next generation of listeners. 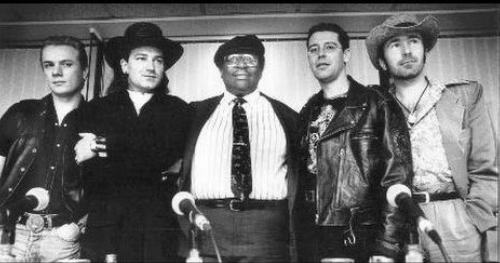 Instead of B.B. influencing U2 to play the blues, they turn the tables and turn B.B. into a rocker with When Love Comes to Town.

♫ When Love Comes to Town

DIANE SCHUUR is a jazz singer and pianist. 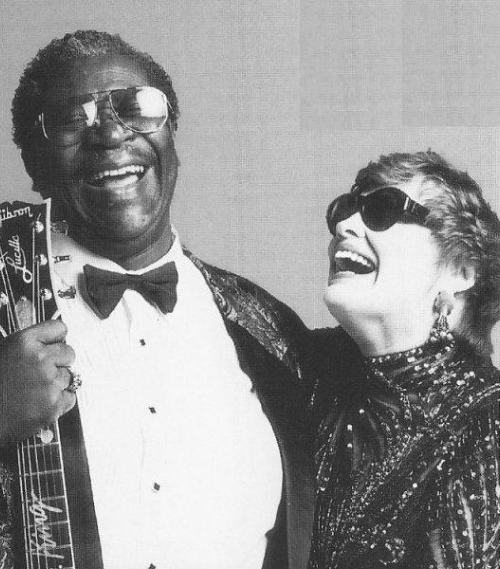 She’s performed with many artists over the years, including Frank Sinatra, Ray Charles, Stevie Wonder, Stan Getz, Alison Krause and many others. Today it’s B.B.’s turn. The song they perform is Spirit in the Dark. They sure get the spirit on this one.

♫ Spirit in the Dark

After that song, we all need to sit down and rest a while. To help us calm down we have WILLIE NELSON singing and playing with B.B. 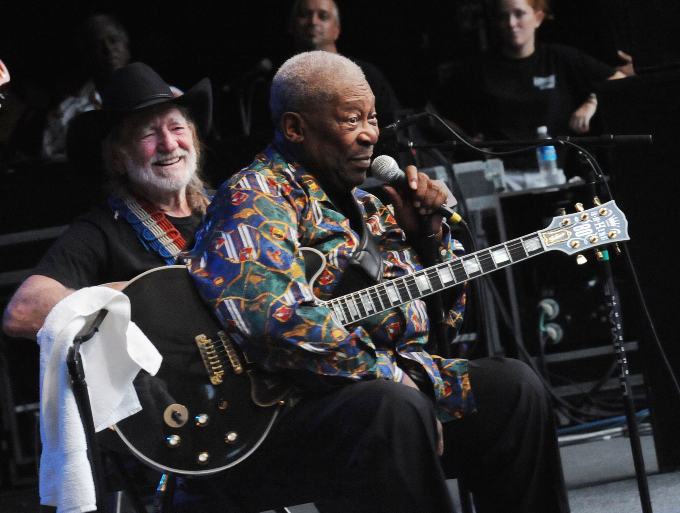 We have two distinctive guitarists on this one, maybe the two most distinctive who have ever recorded. No one would mistake either of their playing for anyone else.

The same with their singing. The song they perform is Night Life, a song Willie wrote. Due to his straitened circumstances at the time, he had to sell the rights for a pittance, and it’s often credited to others, but it is Willie’s.

The song Hummingbird was written by Leon Russell, and he did a fine version of it. Around the same time, B.B. recorded it on his “Indianola Mississippi Seeds” album. Today he has the help of DIONNE WARWICK to sing it. 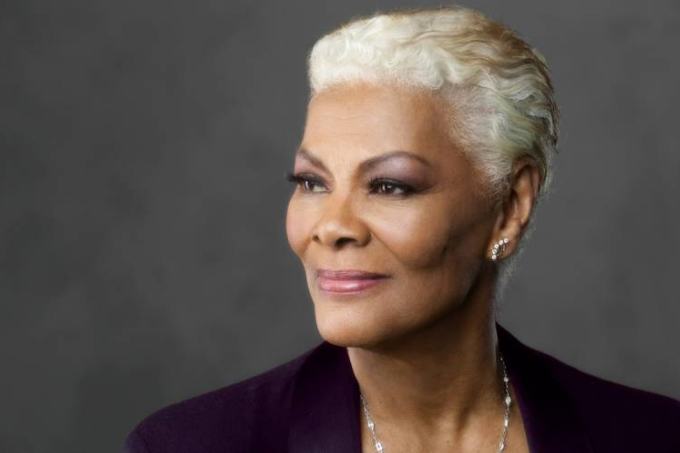 This version is the equal of the previous two I mentioned. Maybe it’s the song – there are some songs where there is no bad version. This could be one of them.

Mac Rebennack, better known to most of us as DR JOHN, died recently. 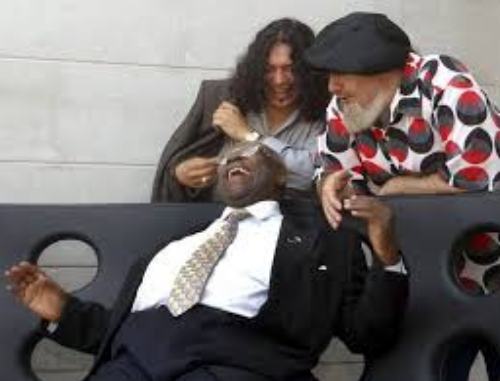 Mac (or John or Doc or whomever) was another who liked performing with other people, so he’s a good fit in the column today. His style is quintessentially New Orleans, where he was born and bred. Of course, that includes a big dollop of the blues.

They perform There Must Be a Better World Somewhere. Unfortunately or fortunately, this world is all we have.

♫ There Must Be A Better World Somewhere

When I say that ERIC CLAPTON is up next, I imagine you'd expect a great blues jam with B.B., however, you'd be wrong. 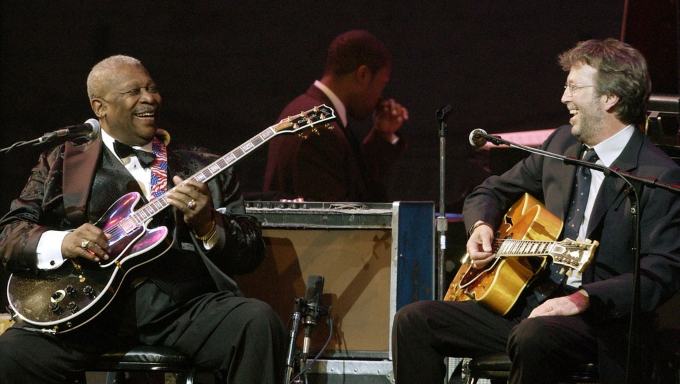 Eric and B.B. recorded an album together called "Riding With The King" where they performed in all sorts of styles. The track I've chosen is the old standard Come Rain or Come Shine, not what you'd expect from these two. Of course, they turn it into a blues song.

Although he didn’t write it, The Thrill Is Gone became B.B.’s signature tune. He performed it in pretty much every concert he gave during the last several decades of his life. It has appeared on many albums, including “Deuces Wild” where he performed with a bunch of artists and is a valuable source of material today. One of those performers is TRACY CHAPMAN. 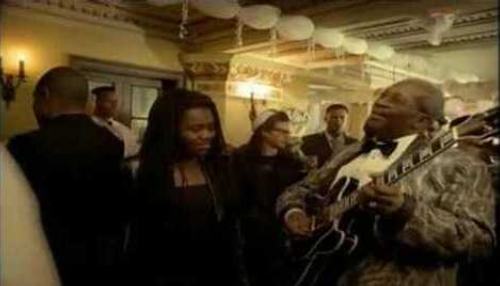 Tracy first came to my notice with her terrific song, Fast Car, from the late eighties. She and B.B. do a great job with the song – it’d be hard not to.

The Thrill Is Gone

I’ll end with one of B.B.’s friends BOBBY BLAND. 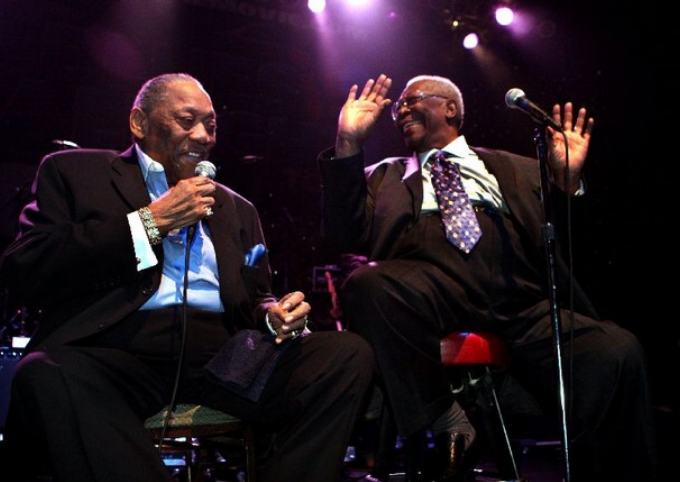 B.B. and Bobby often performed together and also made several records, both studio and “live” records. From one of the latter, a most appropriate song: Let the Good Times Roll.

Peter, I love your column every week. This one, though, hits my heart. I have been an avid B. B. King fan since I was in high school, many years ago. Thanks so much for this terrific collection of B. B. and friends.

What a wonderful collection. I love B.B. King's music and the influence he had on so many other musicians. Thanks for this great collection.