Actually, Millie's birthday is Sunday so we're a little bit early but when someone is in their tenth decade, several days of celebration do not seem excessive to me. So...

In recent years, Millie has spent less time with her blog, called My Mom's Blog presumably because her son, Steve, helped put it together, and then Millie was up and running on the internet in 2003, a year before I was.

We met soon after I started Time Goes By which means we've known one another for about 15 years. For several of those years, Millie produced an ongoing video series for her blog called “I Can't Open It” - something a lot of us have problems with and which became an internet classic.

Here is one of them. Her son Steve is the videographer:

These days you'll more frequently find Millie on Facebook. Here she is having a beer with Steve and his wife Carol last week at Riverwalk. Here's another photo from Millie's Facebook page with Steve and his wife, Carol. Have you noticed that this family eats a lot? 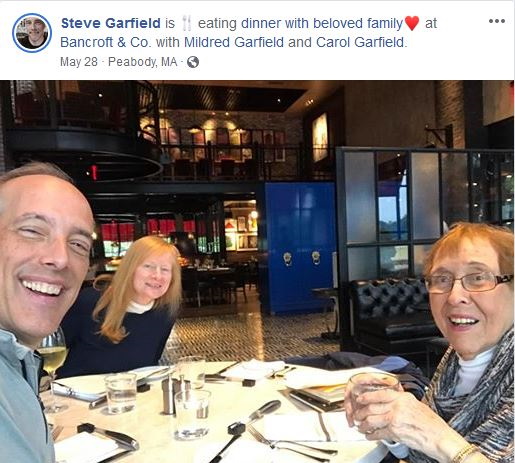 As we have done for many years on Millie's birthday, we add up our years. So if you take Millie's 94 and my 78, we get 172. Add yours to this total or the last total in the comments.

Yes, it will probably get all mixed up and not exactly right but that's the fun of a party – just giggle and move on.

Meanwhile, let's all sing Happy Birthday to Millie and her amazing 94 years. I love you, Millie.

Millie - every toast is for you today - Cheers and Happy Birthday!

Happy Birthday to Millie from Pat in Iowa.

Cheers, Millie, have one for me. A cold beer would go good right now in this scorching California Central Valley heat wave. Hmm. Maybe I have a hidden bottle of Trader Jose in my refrigerator.

Thanks to Ronni and all our friends for giving me "1,948 Birthday Wishes." I am having fun celebrating my big day in advance - I few days ahead of time just gives me more time to enjoy!

I think that is a great idea. Recommend we all do that for our birthdays!!!

Happy Birthday to you Millie!

2656. Yours were two of the first blogs I started to follow after they were mentioned in Time Magazine. We've come a long way, ladies!