RECALLING THE IMPACT OF THE EARLIEST MOVIES

The Museum of Modern Art in New York City owns the footage in the video below and reminds us that in the late 1800s, when moving pictures were new, they were amazing to see:

“'[Today], We live in an environment where there are moving images constantly around us. But in 1897, this was startling and new and completely revolutionary”...Curator Dave Kehr joins the discussion to help us look at the early film with the same awe-inspired, expanded view of the world of its first audiences,” the YouTube page tells us.

WHY DID THE SALMON CROSS THE ROAD?

TGB reader Joan McMullen, who sent this video, says this happens on the Skokomish River near Shelton, Washington, USA. When the river floods, the salmon take short cuts swimming across the road to go upstream to spawn. It happens almost every year.

A commenter on the YouTube page tell us there are signs on the road to warn people: "Danger, Drive Slowly & Carefully, Fish Crossing the Road".

WHY DO WE SWEAR?

Nothing is more satisfying when I've banged my toe into something hard than a string of invective aimed at the gods who cause these things to happen.

As The Atlantic magazine explains on the YouTube page:

”Swear words are an important part of all languages. In English, words like 'shit', 'cock' and 'bastard' can be used as a curse or an insult and, let's face it, saying them can feel good. Scientists believe swearing has a special place in our brains. This film contains strong language. Obviously."

”Prior to 1964, books had a 28-year copyright term. Extending it required authors or publishers to send in a separate form, and lots of people didn’t end up doing that. Thanks to the efforts of the New York Public Library, many of those public domain books are now free online.”

You can download these books at websites like Hathi, Project Gutenberg, Standard Ebooks and, often, your local public library. And you can read more about those millions of free, public domain Ebooks at Vice.

WEAVING A BRIDGE IN Q’ESWACHAKA

Here is what the YouTube page tells us about this bridge. (Inka is the same as the spelling we are more accustomed to in the U.S., Inca.

”Every year, local communities on either side of the Apurimac River Canyon use traditional Inka engineering techniques to rebuild the Q'eswachaka Bridge. The old bridge is taken down and the new bridge is built in only three days. The bridge has been rebuilt in this same location continually since the time of the Inka.

“This video is narrated by John Ochsendorf, professor of civil engineering, Massachusetts Institute of Technology, and produced by Noonday Films.”

Can you imagine doing all that every damned year?

HOW THE ANIMAL KINGDON SLEEPS

”Sleep is universal in the animal kingdom, but each species slumbers in a different — and often mysterious — way. Some animals snooze with half their brain, while others only sleep for two hours a day (without even suffering sleep deprivation!).

Mental Floss tells us that Walter Chandoha, who died in January at age 98, spent a lifetime, 75 years, photographing domestic cats. Here is my favorite from 1955: 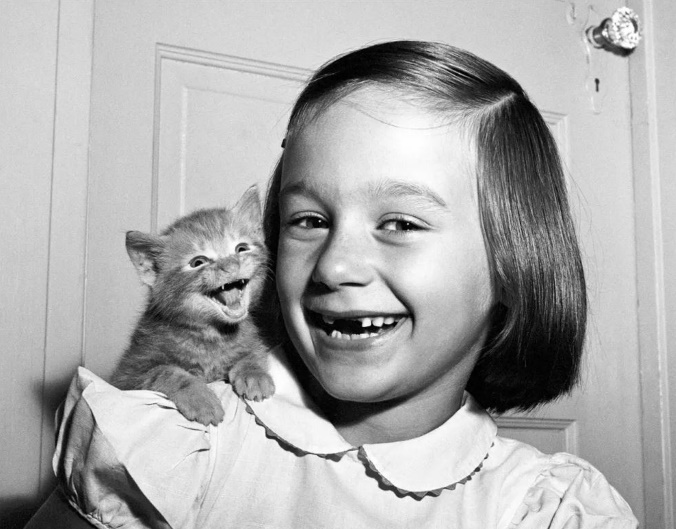 You can see more of Chandoha's cat photographs at Mental Floss. A book of his cat photos, Cats: Photographs 1942-2018, will be published on Monday, 12 August.

TGB Reader Joan McMullen sent this video of Keller Laros removing a fish hook and line from a dolphin who apparently sought out the diver for help.

TEACHING A KID TO TELL TIME

It's an oldie but goodie from TGB reader Darlene Costner who says she thought she knew how to tell time just fine until watching this video from comedian Dave Allen explaining clocks and time to a young boy.

Great collection of videos this morning.
I’ve seen the salmon one several times. Just glad humans dint have to do the things fish to in order to procreate.

My favorites were the bridge building.. making a community project than celebrating is wonderful.

Dolphin rescue touched me. My husband and I did that dive the year before he died. He wanted to go back and get his real SCUBA certification in Hawaii. We’d looked at doing it here but Hood Canal is where the ‘final’ is held. Hawaii is nicer and warmer.

As always, thanks Ronni, for being you. Glad they discovered what was causing your pain.

Hard to pick a favorite from this collection of really interesting stuff. I'm a sucker for cats, always. The salmon were intriguing. I knew of walking catfish, but the salmon thing is new to me.

Which ones to choose? Liked them all! Inka bridge was amazing, and also noticed the familiar facial appearance and movements akin to the American Indians, our country's honorable ancestors. The swear, sleep, dolphin/man connection and time teaching were interesting and entertaining - I swear....!

The library is a constant for me, so VICE looks pretty interesting, especially when out of town or traveling.

Today's selection is one of your best, imfo.

The Dolphin story I could watch again and again.

Great collection of ... well, interesting stuff. And thanks especially for the free book websites.

Fun AND informing! Thanks, Ronni!

Last week a friend sent me the following message:
Studies have shown that intelligent people swear more than stupid motherf***ers.

Thank you & thanks to TGB reader Joan McMullen.

It feels very good to be here. More so when one of my posts (Salmons of Skokomish River) is featured here and that some found it to be intriguing. Hope it brings smiles to a few.

I am posting a link to TGB in the YouTube video.