KANGAROOS IN THE SNOW

While it is high summer in the United States and other northern hemisphere countries, it is winter in Australia. One source tells me snow is an uncommon occurrence down under. Another source says it's not so rare.

Either way, here is, to me, a video of an odd occurrence, kangaroos frolicking in the snow.

There is, in physician examining rooms in the U.S., a pain chart asking the patient to choose, on a range of one to ten, how much pain he or she is having that day. I never know what number to choose because I don't know what my upper pain limit is.

This is a much more evocative and useful pain chart (she said, smiling). My friend Frank Paynter was the first of several people to send it. 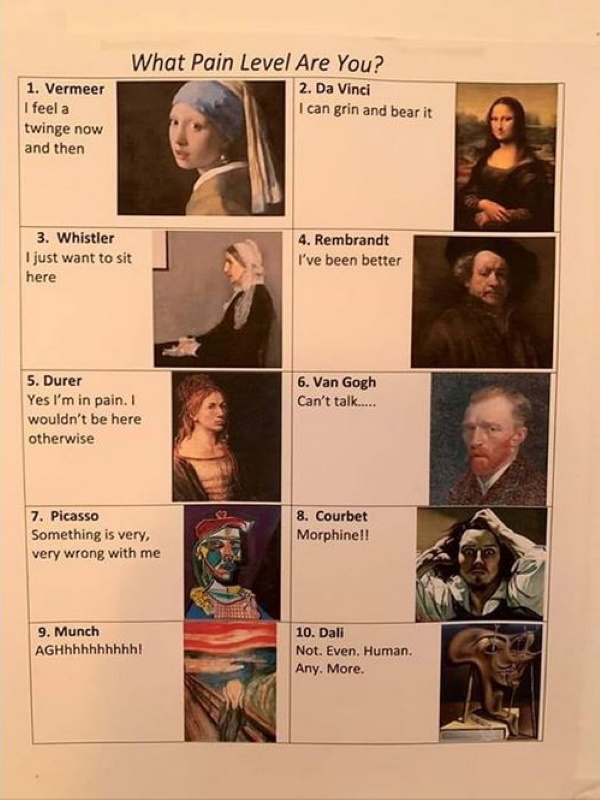 Keep your eye on the yellow marble as it navigates a puzzle path of contraptions, the YouTube page tells us. The whole thing is set to Mozart's Eine Kleine Nachtmusik.

The creator says he went through about 300 failed recordings in a month before he got it right.

I'm going to break precedent (and maybe law) by publishing this entire, but very short, story here. No one should need to click around the web and back to read such a fine and funny piece of journalism.

There is no byline. It is an AP story via The Guardian. Your goal is the last sentence but don't spoil it for yourself by skipping down to the bottom. Read the whole thing – you'll appreciate the ending more.

”A patrol car was struck by a falling bear in northern California last weekend, causing the vehicle to crash and explode.

Authorities said a Humboldt county sheriff’s deputy was driving on State Route 96 on 3 August, answering a report of a drug overdose in the community of Orleans, when the bear fell or jumped onto the car, apparently from a steep embankment.

The bear smashed the hood and windshield. The patrol car hit an embankment, rolled onto its side and burst into flames.

The deputy managed to escape without serious injury.

The fire was contained to about half an acre but the car was gutted.

However, the California department of transportation stated: 'Don’t worry, the bear also fled the scene.'”

Photo of the mangled police car at The Guardian.

There is a place in Minnesota that has the feel of small town America, but if they want to get to the Northwest Angle, travelers have to leave the U.S. and go through Canada to get there.

Lee Cowan explains a geographical quirk along the northern border of the U.S. From CBS Sunday Morning.

”Scientists on the Nautilus team ran into a mysterious creature on a recent expedition in Hawaii. The strange fish was found nearly a mile beneath the surface." From National Geographic:

WHAT IF HOUSE CATS WERE MUCH BIGGER THAN THEY ARE

Russian artist Andrey Scherbak creates fanciful “photos” showing what the world around us would be like if house cats were much larger than they are. Here are two: 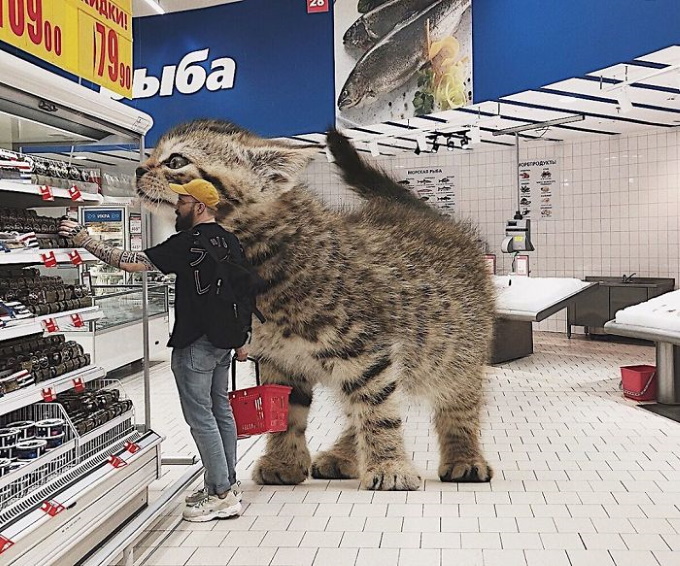 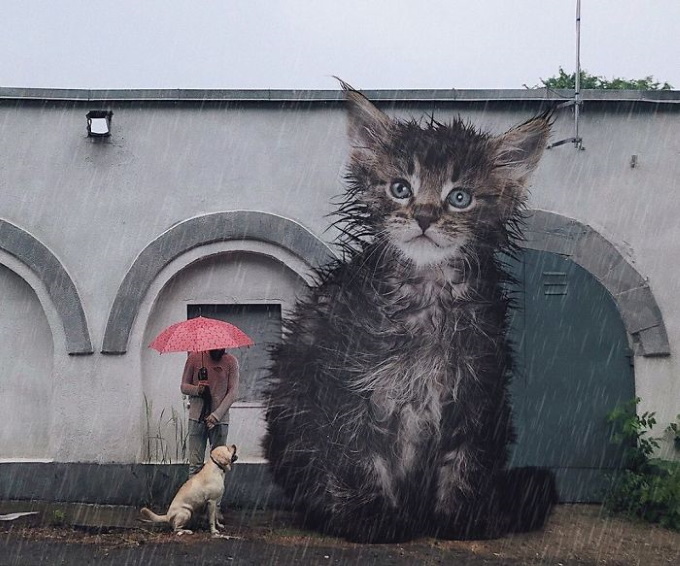 There are many more at Bored Panda and 150 of Scherbak's images at Instagram.

CREATE HAPPINESS IN WHATEVER YOU DO

All I will tell you is what TGB reader Joan McMullen said in an email when she sent a link to this video: “It's not what you think.”

Create Happiness was superb! Loved the yellow marble and gather it was formed in a looooong hallway, in a place with no kids, no cats, no dogs, no people? And always good to see the cats.
Yes, the bear was the star here in NoCal last week...and my doc is getting the pain pic. Some people are so clever and must have a fun time with an idea as this.

Thank you
Wonderful stories for my Saturday morning,

Really good ones Ronni! Always enjoy your “Interesting Stuff” so much! Thanks again for a happy start to my day 😄.

Creating Happiness touched my heart. Giggling children are the Best! Thank you so much for this spot of joy.

A particularly good Saturday selection! The cats are a bit scary, in that I have a new kitten who still thinks biting is a way to play. Thankfully he's still pretty small.

Loved the marble maze- our 6 year old grandson is obsessed with building marble mazes -will save the video for his Gramma Grampa day next week. All the items and stories were very interesting this week. Thank you for a fun start to my weeekend.

Great post. Especially loved the What Pain Level Are You? Thanks. Wishing all of you a day filled with joy!

Thanks, Ronni: hope you don't mind that I reposted 3 of your clips on my FB page.

Have a good weekend! Emiel aka Emiliano

Thanks, Ronni--love the cats (of course!) and will print out the pain chart for my next doctor visit.

Snow is a regular occurrence in Australia; it happens every winter, but only in the mountains of north east Victoria and south east New South Wales. Also in those in Tasmania.
It doesn’t snow in any of the major cities.

I can't imagine a life where I have to drive over an hour each way to get to a grocery store each week let alone have to cross a border to do so. The story about those living in such a remote area of our country left me feeling like I have nothing to complain about especially when I am impatient about getting to my grocery store 5 minutes away.

Watching the video about the family living in Northwest Angle, Minnesota puts things into perspective very quickly. Kudos to those people for their resilience to survive in such a remote area of our country.

I've always read that cats, big and small, are temperamentally similar. So, a big housecat might do as much damage as a tiger, if it were in a grumpy mood.

Loved the window washer with the kids. What was it that they thought we'd think it was that it wasn't? I'm assuming the kids are cancer patients . . .

I too am stealing the pain chart for wide distribution.

Thanks for all these!