CAR PARKED IN KITCHEN TO SAVE IT FROM DORIAN

”Jacksonville native Patrick Eldridge told CBS News he put his smart car inside his house on Tuesday morning, adding that his 'wife was impressed that 'I was right about it being able to fit into the kitchen.'”

Wife Jessica took some pictures and posted them to Facebook. 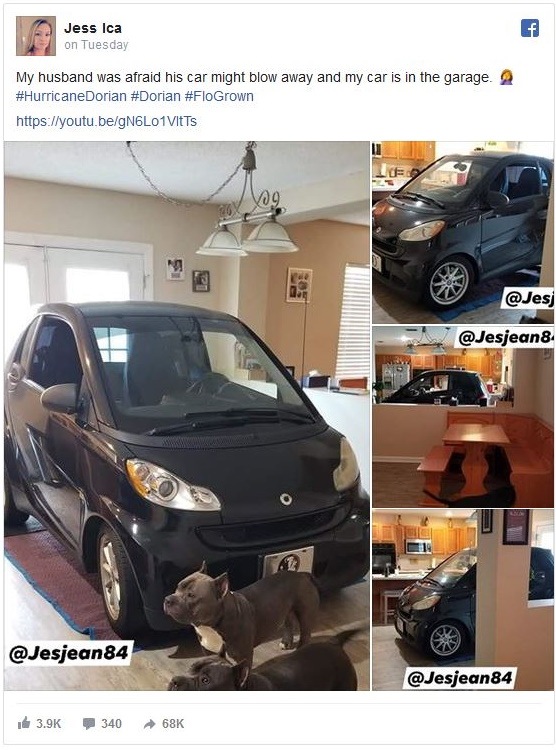 Unfortunately, I don't know if their house and car survived. More at CBS News.

”...the site compiles the most popular videos uploaded to YouTube on that day exactly 10 years ago,” reports Mental Floss. Since it shows you the top video in each of eight different categories — music, comedy, film and animation, entertainment, news and politics, pets and animals, sports, and gaming — the site offers an intriguing snapshot of what was going on in the world at the time.”

Here is one of the ten-year-old videos from yesterday when I was writing this:

SOME REPUBLICANS ARE CANCELING STATE PRIMARIES

Yet another way the GOP and Trump are undermining democracy. Politico reports:

”Four states are poised to cancel their 2020 GOP presidential primaries and caucuses, a move that would cut off oxygen to Donald Trump’s long-shot primary challengers.

“Republican parties in South Carolina, Nevada, Arizona and Kansas are expected to finalize the cancellations in meetings this weekend, according to three GOP officials who are familiar with the plans.

“The moves are the latest illustration of Trump’s takeover of the entire Republican Party apparatus.”

There is more to it than I've quoted. You can read it at Politico.

There is more to read at Mother Nature Network and Mental Floss.

HOW TO CONDUCT AN ORCHESTRA

The video also includes a short history of how music conductors came to be.

Not long ago, I posted a video here about a contest to find the best baguette in Paris. This time it is a debate in France over whether what Americans call a chocolate croissant should be called a pain au chocolat or a chocolatine.

They say that fall in the U.S. begins the day after Labor Day, the first Monday in September. That's not really true. In terms of science, it begins on 23 September this year.

Either way, fall colors can't be far behind. It can be so beautiful that some people drive many miles to see it up close and personal.

There is video from Vimeo that uses slow motion to show how deciduous trees change their colors. The photographer tells us:

“My name is Owen Reiser. I am a 19 year old biology student and self-taught photographer with an appreciation for the smallest things in nature.”

Here are Reiser's photos of leaves changing color so we can watch it happening:

There is more information at Mental Floss.

You can see more of Reiser's photographic work at Instagram.

Also, on another Mental Floss page, there is an interactive map of the U.S. showing when peak color is expected in the lower 48.

I like the idea of protecting the Smart Car.

From the Politico article to which you linked, "Kansas did not have a Democratic primary in 1996, and Republican officials in the state pointed out that they have long chosen to forgo primaries during a sitting incumbent’s reelection year."

Kansas, although a red state did not, as I recall, go for Trump in the last presidential primary; thus, Trump must quash the upcoming primary. So sad.

Your “Interesting Stuff” is always interesting. The video on the chocolate croissant controversy was fun. Food is important in France, even food names and this video proves it: it’s being debated on TV all the way to the president. I guess it would be more engaging to watch this debate than the constant arguing about whether hurricane Dorian was making a detour to Alabama.
On my monthly trips between Atlanta and Nashville I bring a thermos of strong coffee and a chocolate croissant for my midway stop. Whether you call it un pain au chocolat or chocolatine, a chocolate croissant by any other name would taste as delicious.

Love seeing Interesting Stuff each week. I'm reposting the one with the beautiful leaves...what a talented young man. Thanks for collecting these snippets.

The car in the kitchen - ha! I found the person's twitter page:

"We were blessed to not be negatively affected by Hurricane Dorian, but we have been given a platform that we would now like to use to help send relief back to the Bahamas for all the hurricane victims. It would be..." [I know links aren't allowed in the comments]

The leaf video was cool!

I'm dying for one of those croissants to go with my coffee right now. And I can almost smell that bakery ... mmmm!

I've always thought conducting an orchestra must be a huge thrill. To merely wave one's arms and have a full orchestra respond with some magnificent music ... what power! What a gift.

The chocolate croissant controversy brought back a wonderful memory for me. Many years ago I was on a tour of France and breakfast was included in the package. Our hotel in France served delicious coffee and chocolate croissants. I confess to snitching an extra one to eat later each morning. Love, love them - a chocolate croissant by any other name tastes as Magnifique.

When YouTube started, I was volunteering for a baboon sanctuary. I searched for baboon videos and at that time there were around 6 and most of them were of poor quality. Today, there are too many to count!