By Diane Darrow of Another Year in Recipes

The old saying has it that you can’t make a silk purse out of a sow’s ear, but one day I thought I’d give it a try. My “sow’s ear” was a bag of three avocados I’d bought for the extremely low price of $2, intending to make guacamole. They were hard as rocks, so I left them out for a few days on a sideboard to ripen.

They didn’t. After a full week, they were still rock-hard and were developing some squishy dented and flattened spots. Grand! These bargain avocados were clearly never going to ripen. I’d just have to use them now, adjusting my recipe to cope with whatever would turn out to be edible on them.

Once I’d peeled the avocados and cut away all the ugly gray-brown parts, I was left with a small quantity of too, too solid flesh. 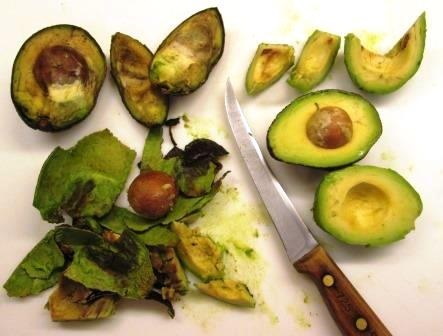 First adjustment (actually decided earlier): Don’t buy a bunch of fresh cilantro when you’ll need only a few sprigs. Defrost a cube of the cilantro base you’d made to salvage some of the last big bunch of it that you’d bought.

Second adjustment: Don’t even try to mash the flesh with a spoon or chop it with a knife. Puree it by machine.

That done, I could proceed with my usual approach to guacamole: chopping onion, tomato, and a serrano pepper and mixing them, along with salt, into the puree and cilantro base. It came out looking pretty good, much like a proper guacamole.

Hoping for the best, I set a bowl of it next to a batch of tortilla chips and served it as our dinner appetizer. 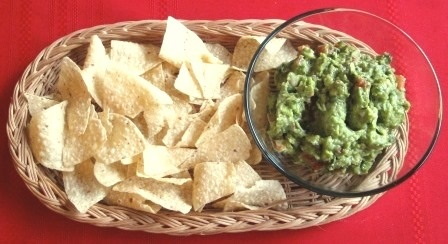 But alas, that guacamole was no silk purse. My gallant husband dipped one chip and said he tasted mold in it. It didn’t taste moldy to me but neither did it taste much of avocado. He stopped after the second chip.

Feeling an obligation, I ate more of it than that, but it was completely uninteresting. Maybe a plastic purse?

Regretfully, I discarded the rest. Let that be a lesson to me (which at my age, you’d think I would have learned already): Don’t buy avocados that you can’t pick up in your hand and feel at least the beginning of ripening!

[EDITORIAL NOTE: Reader's stories are welcome. If you have not published here or not recently, please read submission instructions. Only one story per email.]

The trick I heard and tried to use was to put Avocados in a paper bag (if you can find one) and put them in a cool cupboard. Where I usually would forget about them until they were ready to compost!

You tried harder than I would have! Avocados are hard (yes, in both senses of the word) to pick out at the store. How can they be rock hard and going bad at the same time?! Good story.

Such a sad and disappointing end to an avocado's promise. I wish I knew a sure method for selection and ripening, but, alas, I've been ended up on more than one occasion with bad sow's ear guacamole myself. You have my sympathy!

I had some avocados like that a couple of weeks ago. A paper bag would not have helped these. I tossed them.

Wo, and one needs a silk purse with which to hold all the money that avocados now cost!

Several nights ago I dreamed that I was telling someone that I intended to go on eating avocados every day no matter how much they cost. I do love them.

Bite the bullet, ladies and gentlemen: buy the ready-to-dip. Oh, but wait - we Depression Kids would sooner go hungry than buy the ready-made, right?

Good info and story, Diane, and it sounds like cooking is your favored avoca-tion, yes?

That green oval would have seen the backside of my kitchen door right off the bat!

We have an avocado tree I planted about 18 years ago and, believe me, it now produces
the most delicious fruit - only my favorite people get our overflow !! And I constantly
get compliments on the flavor....they stay on the tree until they fall and that is the trick to getting the best flavor. They still need to ripen...in a bag in a dark place....when
bit soft to the touch, they are ready to eat.
My tree was in a 5 gallon pot and it took maybe 5 years of TLC
before it even produced one fruit. Now the tree is huge and beautiful, a Haas.

Years ago when my husband was stationed in Germany I made guacamole for friends
from avocados I was able to buy in the commissary. My woman friend, originally from Maine phoned me to ask about the recipe; she said, " I grated the guacamole and now what do I do next?" Being from California I always make guacamole and love avocados.

Thanks for the memories, and the chance to brag.

I've just about given up on finding decent avocados at ANY price! No matter how ripe or green they are when purchased, their interior state is a complete gamble. I'm convinced that the recent worldwide craze for avocado toast, guacamole, soup, ice cream, salad dressing and other dishes has resulted in demand exceeding supply, plus poor shipping/handling practices en route to consumers. :-(

I enjoy stories about everyday life’s little (and not so little) offerings and how people manage them. Well done! Thanks for the avocado buying refresher lesson, too!