In the time since I was diagnosed with pancreatic cancer more than two-and-a-half years ago, an appeal of the writings by very old people and of those near death has grown within me.

On the weekend, I came across one that I want to share with you. It is from a book published last year in the United Kingdom titled, Written in History: Letters that Changed the World by Simon Sebag Montefiore.

An excerpt from the book turned up last Saturday in a weekly newsletter titled Air Mail from former, long-time editor of Vanity Fair magazine, Graydon Carter. 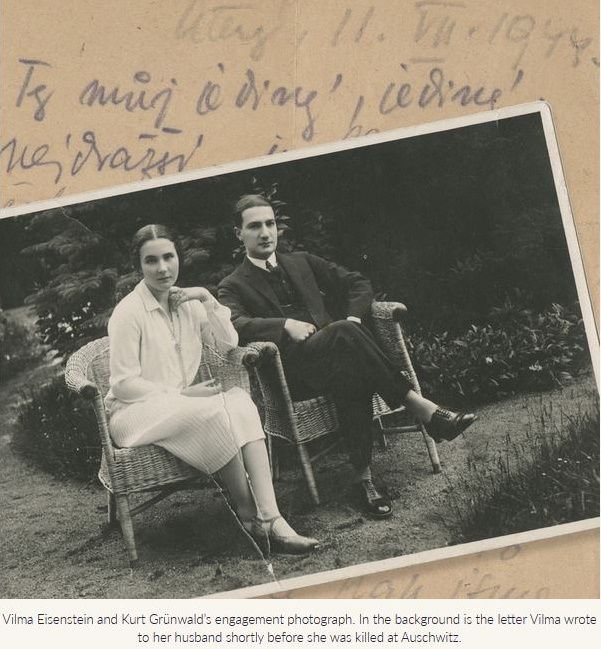 Briefly, this is a hastily-scribbled letter from Czech prisoner Vilma Grünwald to her husband, Kurt, as she and one of their two sons are selected by Joseph Mengele for instant extermination at Auschwitz on 11 July 1944.

The letter is almost unbearably poignant and I urge you to read the full background at Air Mail. Here is the text of the letter:

"You, my only one, dearest, in isolation we are waiting for darkness. We considered the possibility of hiding but decided not to do it since we felt it would be hopeless. The famous trucks are already here and we are waiting for it to begin.

“I am completely calm. You—my only and dearest one, do not blame yourself for what happened, it was our destiny. We did what we could. Stay healthy and remember my words that time will heal—if not completely—then—at least partially.

“Take care of the little golden boy and don’t spoil him too much with your love. Both of you—stay healthy, my dear ones. I will be thinking of you and Misa. Have a fabulous life, we must board the trucks.”

The original letter was donated to the United States Holocaust Memorial Museum by Vilma's and Kurt's son who, like his father, survived.

Thank-you for publishing this heartbreaking and poignant letter. My mother was a refugee from Nazi Germany. The Holocaust transformed all of us.

You are doing great work. I admire your resolve.

It certainly is a poignant letter and the fact that it reached its destination and survived to end up in a Holocaust Museum is remarkable. It also upset me because it reminded me that we have Holocaust deniers, and the darkness of hate seemingly is growing today with our president leading the pack.

We all like to think we will be leaving the world a better place than we were born into, so you have to stick around a couple of more years, Ronni, to help make that true---again---for our generation.

Everything about this is so moving, extraordinary and remarkable that it's difficult to know what to say. I am in awe of those who seem able to so completely accept the inevitable with such grace, especially when the fate is as horrific as this. It seems incredible that the guard actually cooperated and the letter was delivered to Vilma's husband and son. That they survived and this letter was preserved and made it into this book seems nothing less than providential.

Powerful. Thank you for sharing this letter and back-story, Ronni.

I hope I'm that brave when I soon, too, will be facing Eternity.

Thanks for this missive of bravery. It seems amazing that the letter arrived into her husband's hands. A reminder that always there are brave, enlightened beings among us.

Oh, wow. So heavy. I could cry.
BUT, however we say it, however much we try to put this life and death into words, we just don't know what eternity might or might not have in store for us and this hits us hard. Vilma did it bravely and eloquently. I am reeling but will recover.

Heartbreaking, that such a sick, hate-filled man could lead so many to commit atrocities against millions of entirely innocent people. As humans, we are faced with challenges every day, whether it is to face the consequences of some past wrong deed or to crawl out of bed when it's painful and almost unbearably difficult to put one foot in front of the other.

My husband's uncle was kicked to death on the street in Antwerp by Nazi soldiers. He was on his way home from work. We flatter ourselves that it can't happen here, but it is happening here.