The headline on tomorrow's cover story in the Sunday New York Times Magazine is titled “So the Internet Didn’t Turn Out the Way We Hoped. Now What?”

Has there ever be a more perfect mashup of subject, title and image? 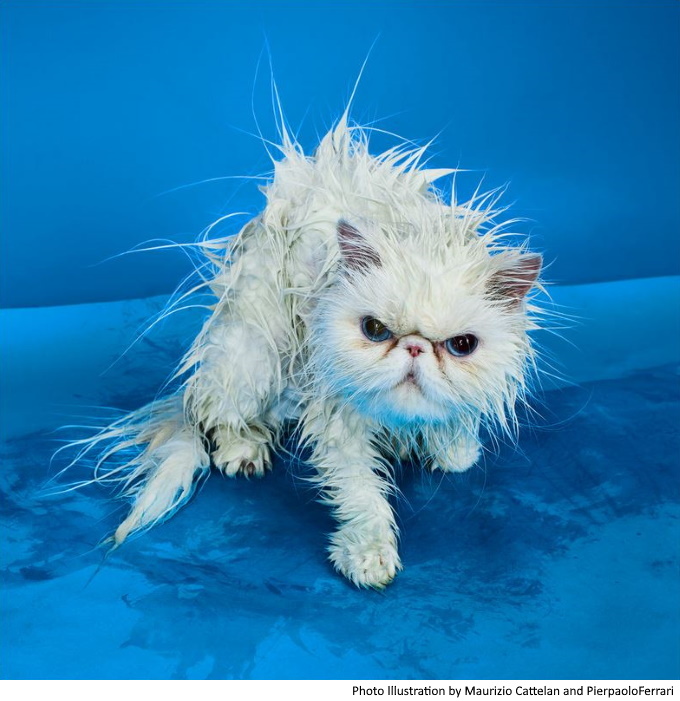 TGB reader NYPup sent this this video from Stephen Colbert's Late Show. I think it may be the best cold open the show has ever produced.

According to this story, L-triptophan has nothing to do with causing the naps people take after Thanksgiving dinner. That's a myth, explains Mental Floss.

”It’s more about heaps of potatoes, mountains of stuffing, and generous globs of gravy—and that, along with alcohol, is more likely the reason you collapse into a spectacular food coma after your meal.

“Overeating (especially of foods high in fat) means your body has to work extra hard to digest everything. To get the job done, it redirects blood to the digestive system, leaving little energy for anything else.”

Channel or network IDs, idents, identifications are very short animations to remind viewers what channel their TV is tuned to. The NBC peacock is probably the most recognizable one in the U.S.

In France over the past few years, France 3 has produced a series of IDs starring some animated marmots. The latest take a shot at mocking cult films and they are as charming as they are funny. Take a look:

You can see some marmot IDs from previous years here.

Every year or so Boston Dynamics releases their latest robots and I usually publish a video. I've never found out what the robots are for and mostly, I don't rally care. I just think they're kind of cute and move in an interesting manner.

These newest ones - nine, 20-pound Mini-Cheetah robots - are showing their stuff with some students from MIT:

”The hope,” reports Mother Nature Network (MNN), “is that students and researchers will develop machines that can help people in situations where human intervention may be too dangerous or risky.”

TGB reader Mary sent this item. Hospice Buffalo has been studying end-of-life dreams of their patients for many years.

”In the final days of life, dreams seem to bring comfort and tie up loose ends, according to Dr. [Christopher] Kerr, [CEO of Hospice Buffalo]. “The thing you have to realize is the time for therapy and analysis is over. They’re nearing the end of their lives and people aren’t emerging from these experiences with questions; ‘what happened to me?’ They’re coming out of this with answers and meaning.”

Here is a video from local TV station WIVB about the Hospice Buffalo dream studies:

The print story at the WIVB website is a close transcript of the video.

Via email from Hank Berez. 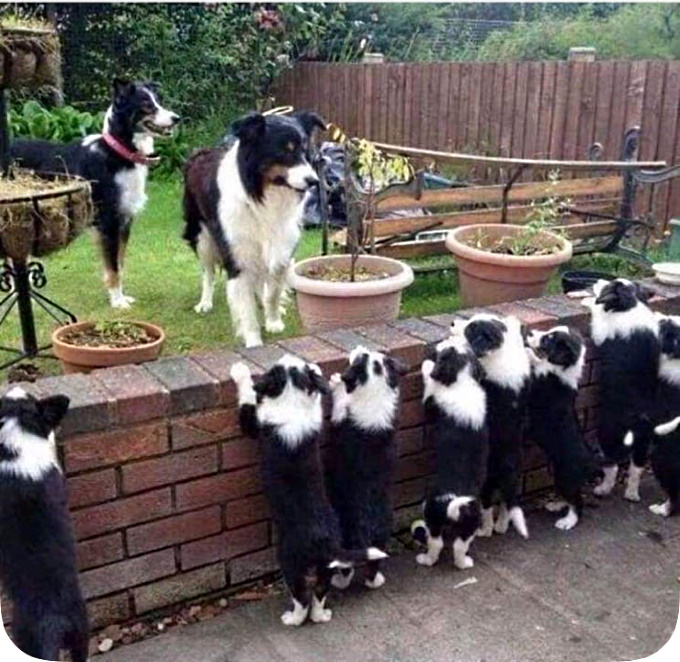 Wait until you see this - 15-year-old Kyra Poh's amazing wind-tunnel dance - a gold medal winning performance at the Wind Games 2018.

"...'wind tunnel' is a facility where thanks to the latest technology and 4 high-power turbines continuous adjustable vertical air flow is generated. This allows anyone to recreate the feeling of freefall in a safe space, supervised by qualified instructors.”

I sure would like to try that wind tunnel. I'm not as limber and flexible as that 15-year-old (I once was) but it would still be fun.

The person who shot this video imagines the otter is getting ready to party. Or, maybe he's got a hangover from too much party the night before. Either way or something else, he's (she?) so damned cute.

Oh Ronni, as much as I appreciated the New York farewell to Trump, those marmots stole the show. Thanks for the laughs today!!

The mini robots are just for fun and grades, I imagine. But I've seen videos of much larger ones being tested for use as pack animals for US troops -- the noise they make being a limiting factor.

Love the marmots. Cute in their own right, and reminders of wonderful times in the high country.

Oh, Ronni! Not just interesting, but great stuff today. Thank you so much!

Oh God, that rendition of "New York" on Colbert made me laugh out loud! I always watch his monologues on Youtube the next day, I gotta start watching his openings too. .. Why doesn't Trump just relocate to Molvania or wherever it is his wife came from--maybe they'll make him king!

When I saw those robots, I thought "here we go, those Terminator movies are going to wind up being prophetic..."

LOVED the girl in the wind-tunnel contraption; I've seen several of those videos before, but certainly nothing like this one--she's terrific! Thanks Ronni :)

I’m still laughing and I will be all day ... not sure if it will be Colbert or the marmots or the border wall! Thanks for bringing a smile to my day.

Thank you for the great piece from Mental Floss about the hazards of overeating, Ronni. (And all the additional laughter that is so restorative for all of us.)

I became an RN in 1958 and even then a heavy evening meal in particular was known as a killer. It takes a lot of energy for the body to digest even a normal meal, and some systems just don't get enough blood supply...period!! The heart seemed to be the most vulnerable, and thus we referred it in those days as "A Restaurant Coronary". It usually occurred in a car after an oversize steak and all that goes with it.

The phrase 'moderation in all things is the best policy' has been around for centuries. Do we follow that great advice? Sometimes !!

Your surgeon certainly used "moderation" in its best possible way. Until just a few years ago, you would have given up some ribs. :-(

One of my son's is currently doing a documentary on a surgeon who has perfected using robotic tools to repair *newborn* heart defects that would have otherwise been fatal. Such skill and dedication must be admired.

Amazing times in medicine it seems to me. In spite of the political issues there are many things to be grateful for now.

Wet kitties are usually unhappy kitties--and, yes, the Internet has not turned out as many of us hoped it would. When Big Money/profits get the upper hand, nothing else matters. In today's society ruled by Vulture Capitalism, if it can be monetized, it will be, regardless of consequences, intended and unintended.

I discovered your blog a couple of months ago and now read it daily..thanks for your powerful testimony about living with a terminal illness..I look forward to seeing more from the Buffalo hospice documentary..do you know the work of Rich martini..he has several books about what he calls the flip side...check out his blog..I think it’s called the martini shot..again thanks for your lovely and thought provoking writing

I mis-read MINI-CHEETAH ROBOTS as Mini-Cheeto Robots and my mind went - ohdeargod no... Blame it on the political climate.

I especially liked this Saturday blog Ronni. The marmot s made me laugh. The Hospice Buffalo especially fired up some thoughts in my mind. I have an 80 year-old friend in a poor place with her health and last few weeks she's been feeling like her dead husband, brother and Dad have been in her bedroom with her some nights. She's rational still it worried me, still does. She's an intelligent, pragmatic person who never espoused a faith or the supernatural, just what she sees. And yet now she sees these loved ones. There are so many things about our brains and ourselves that are not recognized or understood.

What a great collection of items today, Ronnie! Thanks for putting s big smile on my face! I hope you are enjoying a restful weekend!

Oh the sea otter, so delightful to watch and wonder at.

The Hospice Buffalo dream research is fascinating and I hope will help to open at least a few minds, to intriguing possibilities not considered before.

It's long struck me that as a predominantly secular society, commendably embracing science, we have unfortunately thrown out the baby with the bath water.

In our understandable determination to get away from oppressive, intolerant religious beliefs that controlled society for many hundreds of years, we seem in the process to have lost touch with the beauty and wisdom of our spiritual selves, to the point where many now automatically dismiss the spiritual experiences of others as mental confusion, wishful thinking, or plain old quackery.

I find this almost tragic.

There is by now a copious amount of research on near-death experience.  Much of it has been meticulously compiled by physicians who had nothing to gain and everything to lose by publishing such "flaky" information.  They persisted because they felt it was important to document a widespread phenomenon being dismissed and ridiculed by others. Their patients were more often than not people who were reluctant to share what they had experienced, because they didn't want to be scorned and disbelieved.

What does it say about us as a society, that we would automatically dismiss the most profound experiences of our fellow beings?  Regardless of whatever convictions we may hold personally about the continuation of consciousness beyond physical death, we can at the very least respect and listen to those who describe what they have experienced, unfamiliar though it may be to us.

Anything less seems... I dunno, rude?  Presumptuous?  Intellectually arrogant maybe?  Unkind?   Whatever it is, it isn't helpful, to anyone.

LOVE the NY song, the marmots and the otters!!