Home About Archive Contact
Among Generations
ELDER MUSIC: 1952 Yet Again

This video is old, posted to the web 12 years ago, but the Youtube page tells us it's even older:

Funny how it doesn't seem all that dated.

SHOULD IT BE LEGAL TO CHANGE YOUR AGE?

Remember last week when I featured a story about a guy who wanted to legally shave 20 years off his age? My internet friend Chuck Nyren took issue with the man:

”How stupid is that? wrote Chuck. “Even if you look pretty good for being in your late sixties, you’ll automatically look like shit if you smile and tell people you’re forty-two.

“They’ll feel sorry for you, think how pathetic. You’ll be the most wizened, creepy, broken-down forty-two-year-old in the world. They’ll run away, maybe be sick the rest of the day just thinking about it.

But - what if you legally changed your age to ninety-two? That would actually make sense. People will be in shock, admire you, ask how you do it, want your secret. They’ll walk away amazed, in awe.

There is more of Chuck's rebuttal at Mediium.

DYING IS NOT AS BAD AS YOU THINK

Says palliative care physician and author Kathryn Mannix. Her description of a person's last hours or minutes closely matches what I saw in my mother as I sat with her when she died.

THE SCOURGE OF SINGLE-USE PLASTIC

Certainly you've seen the photos and videos of plastic-clogged oceans that are killing marine life and adding to climate change.

Just last year, my town banned plastic grocery bags. I'm not sure how much that helps when plastic bags are still in the produce department and deli items are packed in plastic containers but I guess it is a start.

There are 10 countries in the world, however, where single-use plastics are all but gone or getting there on a fast track. France leads the way:

”The country took its first step toward a plastic-free future in 2015 by giving plastic bags the boot. The following year, it became the first nation to outlaw plastic cups, plates, and cutlery.

“By 2020, French folks will say au revoir to plastic straws, coffee stirrers, and cotton swabs, too. France’s progress has even inspired the entire EU to propose legislation that would ban single-use plastics across the union by 2021, and make all plastic packaging recyclable by 2030.”

Zimbabwe, Australia, Tunisia, Peru, Rwanda and the U.K. among other countries all have regulations in place to rid themselves of single-use plastics within a few years from now.

The U.S. has a long way to go to catch up. Read more at Great Big Story including links to shop for alternatives to single use plastics.

THOUSANDS OF GEESE CROSS THE ROAD

Snopes confirmed the story which appeared in at least four newspapers. He was remarkably accurate as this newspaper clipping shows: 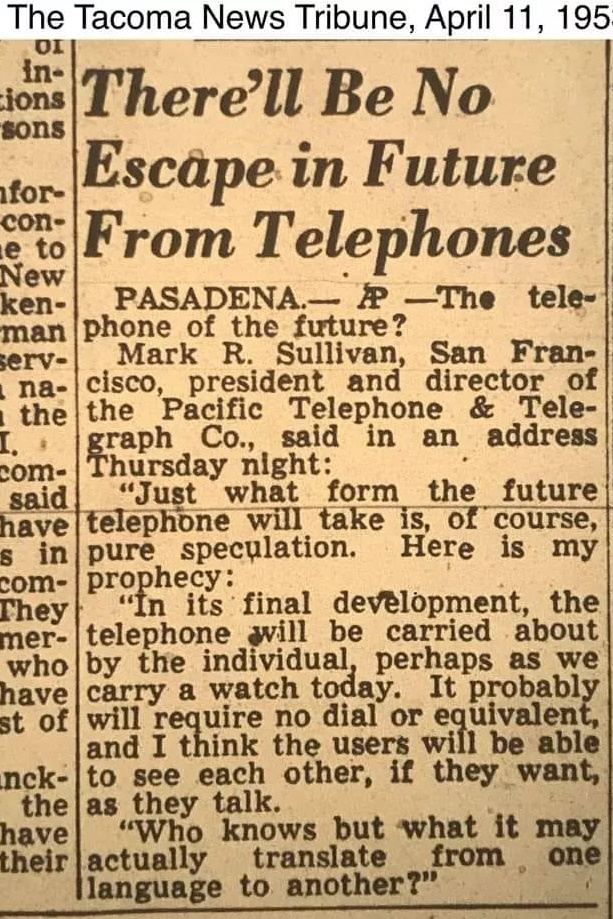 WHERE DID THE AMPERSAND COME FROM

The & is much older than I thought and was once included as part of the British alphabet. Take a look:

FAVORITE PHRASE OF THE WEEK

On 29 October, when House Democrats issued the rules that will be used to manage the public impeachment inquiry, Rep. Dan Kildee (D-Mich.), a member of House Democratic leadership, told VICE News,

"If they want to make it into a goat rodeo, we’re not going to give them the rope to do that.”

Goat rodeo? Ha! I've waited a lifetime for such a great phrase. It will be so useful in such sentences as, “The goat rodeo that spends its time trying to make the president's lies seem true.”

TO BE OF SERVICE

To Be of Service follows several American veterans of wars in Afghanistan, Iraq and Vietnam and the dogs that help them cope with PTSD. The film was directed by Josh Aronson, known for the Oscar-nominated documentary Sound and Fury about deaf families.

Here is the trailer:

You can read more at MNN and check for screenings of the documentary at the film's webpage.

My dad died quietly at home, with my 2 aunts (his sisters) at his bedside, holding his hand and softly singing one of his favorite hymns while my mom and sister stood to the side and watched. My mom had called them just an hour earlier, and told them he was going. I asked her “How did you know?” and she said she just did. (He’d been fighting various cancers for 3 years.)

My mom died just 3 years later, in Hospice care. (She was diagnosed with uterine cancer just 2 years after Dad passed.) We’d been taking turns staying with her, I was at her bedside one afternoon and she said “Doug… could you take these peoples coats.” I said ok, and she said “Why are there so many people here...” and drifted off to sleep. She passed a day later, around 2am. They told us there wasn’t any drama, she just didn’t wake up. (It will be 15 years next month she left us, sometimes I still find it difficult to believe she’s gone.)

On a happier note, the more I watched those geese, the more it made me smile. Life goes on… and on, and on….

Goat rodeo? Never heard of it; but, for as long as I can remember, when things (usually, at work - aeronautical engineering) become so confused that no one can figure out what was going on, it was called a "goat rope". Out national political scene has been a goat rope for years, now.

I'm curious about the geese. Wish we could know where this is, where are they coming from and going to, why so many, and why aren't they flying?!!

Single-use plastic is a big interest of mine. Here in St Aug Beach, FL, after much advocating by some of us environmentalists, the commissioners passed a ban against the thin grocery bags, plastic straws, and styrofoam, only to have it undone when the State passed a ban against bans. Yes, we can outlaw plastic straws, but not styrofoam or plastic bags. We'll be fighting that again this year in the legislature. The push to undo home rule is significant here, as in some other states. Corporations have much to do with it. Here it's Publix grocers lobbying against bans (via the Florida Retail Federation). The beat goes on.

Thanks, especially for the Medieval Helpdesk, and replacing single use plastics!

Always an interesting place to visit! Love it!

Just think! If we had been alert and thinking when that AT&T guy made his dire prediction, perhaps we could have staved off the coming apocalypse that turned the lives of almost all of us into a state of zombification in which we knew not where we were or who we were with—just that we had to endlessly watch something that was happening on a little screen that had somehow become attached to our hand.

Goat rodeo? Perhaps he was thinking about a sports reference. That is, Greatest Of All Time rodeo. Sports wise, quarterback Tom Brady is frequently referred to as a GOAT.

My mother and fiance died in their hospital beds, my mother after an 11 day illness where she was intubated and sedated, and my fiance after unsuccessful heart surgery. My father got his wish to die at home. He was in hospice for lung cancer. My only regret was in not having the hospice minister come. Dad was not very religious but he was raised Catholic and I regret we did not say the Our Father as he was dying. He hung on until my brother arrived. His breathing was very fast, not peaceful at all, and we knew he was gone when he breathed his last breath.

I was asking myself yesterday what I would do if plastic bags were banned. What would you use for garbage? for picking up after dogs? Single use bags are never just single use here.

I have enjoyed reading this blog for the most part, but when you get political; that's where I draw the line. You have readers from both sides of the political aisle; if they are like me, they want some relief from the daily vitriol that we all must endure. It's too bad we can't find it at timesgoby.net We must now part ways.