SOME SOLEMNITY IS IN ORDER

Let's take a moment to acknowledge that we in the United States took on a historic and solemn civic event this week, the impeachment trial of President Donald John Trump.

On Thursday, Chief Justice of the Supreme Court, John Roberts, swore in all the Senate members with a special oath just for impeachment trials. Here is the moment:

“...you will do impartial justice” is the key phrase the senators swore to. Senate Majority Leader Mitch McConnell has stated publicly for many weeks that he will not be impartial, that he is coordinating the president's defense with the White House.

Did you know there is no penalty for not doing impartial justice? I didn't until now. So the point of taking an oath is...?

Well, isn't this fun. The Indy Channel, in Indiana, tells us

Let's go to the video tape:

And for the rest of their lives, the twins will be explaining their separate birthdays.

I'll bet you never heard of this endangered animal before. It has a few more scary or icky names, devil dog, snot otter and lasagna lizard. The YouTube page tells us it

”...is one of the largest salamanders on Earth, growing to nearly 2 feet in length. Sadly, humans have been tampering with their natural habitat, and hellbenders are disappearing from streams in the Cherokee National Forest. Nolan, along with a team of researchers at Tennessee State University, are working on relocating the hellbenders to new streams.

If they weren't so slimy, they'd be cute little buggers.

A TINY WELSH TOWN WITH LOTS OF BOOKSHOPS

”Hay-on-Wye was once declared an independent kingdom of books by the man who appointed himself its king. The United Kingdom's mecca for bibliophiles is less than one square mile in size, but it’s packed with independent booksellers curating all kinds of used and antique reading material.

THE 10 MOST CHECKED-OUT BOOKS FROM THE NYC PUBLIC LIBRARY

While we are talking about books, here's an interesting item. The New York Public Library, the largest library system in the United States, just issued its list of the most checked-out books during its 125 years of existence. Here are the top three:

It would be interesting to know how many of those 441,770 checkouts for 1984 have happened since The Trump administration began.

See the rest of the list along with commentary and some other information at The New York Times or the Washington Post.

And the smallest too. Take a look at this video about Hiromu Inagaki, who serves super-sized sushi at the Umewaka Restaurant in Anjo City, Japan.

Anyone who hangs out with cats knows something about this kind of behavior. As a member of the cat's staff labeled the photo, “Locked My Cat In The Bathroom While I Made A Meal Because He Was Being - - - Annoying. Revenge Was Had.” 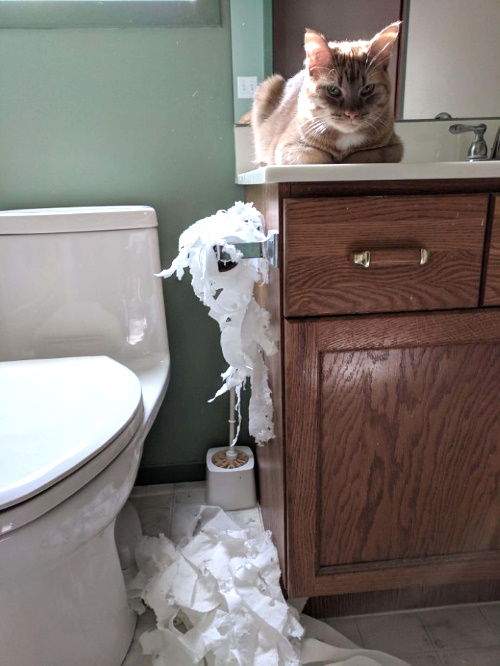 There are 49 more petty revenge examples at Bored Panda – not all it is about cats.

IF SINGULAR THEY BECOMES STANDARD...

After the lively discussion pro and con on Monday's post about the new-ish use of the pronoun “they” and its derivatives in the singular, I couldn't resist this.

Because I run this joint on the web and can do what I want with it, here is a marvelously funny comment from TGB reader George Gates that beautifully illustrates how confusing, obfuscating and messy this new usage can (and undoubtedly will) be.

”My university professional son recently asked me, as they periodically does, to edit their updated resume and cover letter. They were replete with them's, their's and they's in reference to singular antecedents.

“When I corrected them for them, they objected and politely educated their dad that they was out of step with their emerging norms in their university environment there. They was adamant about them.

“Not wishing to seem obtuse, I acceded to them and left them there as they had been written by them. They was happier that their language-stickler dad had seen the error of their outdated ways, and appreciated them for their openmindedness, thanking them then and there.

“They were relieved by their son's understanding and patience with their ignorance. Also flabbergasted, gobsmacked and discombobulated (all sadly underused words!) by the entire experience.”

During four winters in Maine, I personally experienced several of these person-versus-winter mishaps. You may have done so too.

In the six years since it was posted to YouTube, the video has racked up more than 11 million views.

A PENGUIN'S LEAP OF FAITH

She (he?) is brave, resourceful and cute.

Great food for thought, Ronni...Thank you!
Re:" them's, their's and they's in reference to singular antecedents."

I  laughed  over George Gates' comments...and like Judy S. on Wednesday's discussion, can feel anachronistic on a daily basis. My own frustration is due primarily to the "Alphabet Soup" that is now ubiquitous in many articles, newspapers, and even signage .

The he/she/they debate  feels like the proverbial "Tempest in a Teapot" to me at the moment trying to read a Medical Newsletter, newspaper article or headline. The confusion of using only capital letters referencing so many labels only familiar to select groups will limit readability, not enhance it.

It isn't worth this old lady's rather finite time to search out what is being addressed.   Soon someone will publish a pricey acronym dictionary !

Enjoyed your posts today. I reposted "People vs Winter" on my FB page. If someone requests to be addressed in "they etc." I will comply, if I remember. Otherwise I shall plod along in my usual fashion.

With a ten-month-old kitten in the house, I died laughing at the toilet paper photo. TP has been his favorite plaything since he arrived.

As for the penguin, they is indeed brave, resourceful, and cute.

Thanks for finding and passing on all this stuff, serious and silly, I particularly liked the winter shenanigans. Some were scary, some completely laughable. Loved the town of bookshops!

The babies were NOT born in different decades. The first year of the world was year number one, so the first decade ended at the end of year ten. Decades and centuries end with the year ending in zero. The third decade of the 2000s will not arrive until January 1, 2021. Please don't perpetuate the lie that a decade (or century) ends with a year ending in nine.

Mitch McConnell needs to be impeached right along with the Orange T__d. He has declared loudly and in front of television cameras that he will not be an impartial juror, and the Chief Justice should take judicial notice of that face and bar him from participating in the trial of impeachment.

Since the English language has existed, 'they' has referred to more than one person, while he, she, and it have referred to singles. For the rest of my life I will decline to use 'they' to refer to one person. My husband and son are 'he's, my mother and sister and daughter are 'she's, and together the four of them are 'they.' I don't care what others might want, the people in my orbit will be called by the proper pronoun for their gender!!!

While there may be no penalty for not doing impartial justice, there is for taking an oath that you don't uphold. I don't understand how Mitch McConnell, at the very least, could have sworn to that oath and signed the book. If he and Lyndsey Graham, Kevin McCarthy, et al, do not act in accordance with what they have sworn to, how can they not be in contempt of court, at the minimum. I certainly hold them in contempt.

Thank you -- after that solemn opening this morning, for the lighter items. My husband originally was a zoology major, although he graduated as a political science major. However, reptiles, amphibians and other creepy crawlies have remained his greatest interest and we had quite a zoo of some of those in our basement several years ago. He would have liked a hellbender, but various species of smaller salamanders were about as big as his amphibians got. The hellbender needs more of a stream or river type of environment, and if they're disappearing, they shouldn't be kept in captivity either.

I especially loved the article about the Welsh book stores. I'm itching to go there now and I'm going to look into it, but that may not be realistic. I'm curious whether there's anything similar to this anywhere in the U.S.

And last, but not least, I have to say that George Bates is very clever!

I found it interesting that a lot of the most-checked-out books were children's books.