TIME GOES BY DONATION WEEK REMINDER
Yes, we are almost finished – this is day six of the TGB annual donation drive to help support the costs of maintaining Time Goes By. You can read the details on last Monday's post.

Whether you donate or not, nothing changes here. TGB will always remain advertising-free with never a membership fee or paid firewall. If you would like to help support the work that goes on here, click the button below. If not, which is perfectly fine, scroll down for today's Interesting Stuff.

BUZZ AND THE DANDELIONS

Let's start the list today with a great good laugh. Who can resist a laughing baby.

WAIT TILL YOU SEE THESE BABIES

Meerkats this time, born at the Miami zoo. 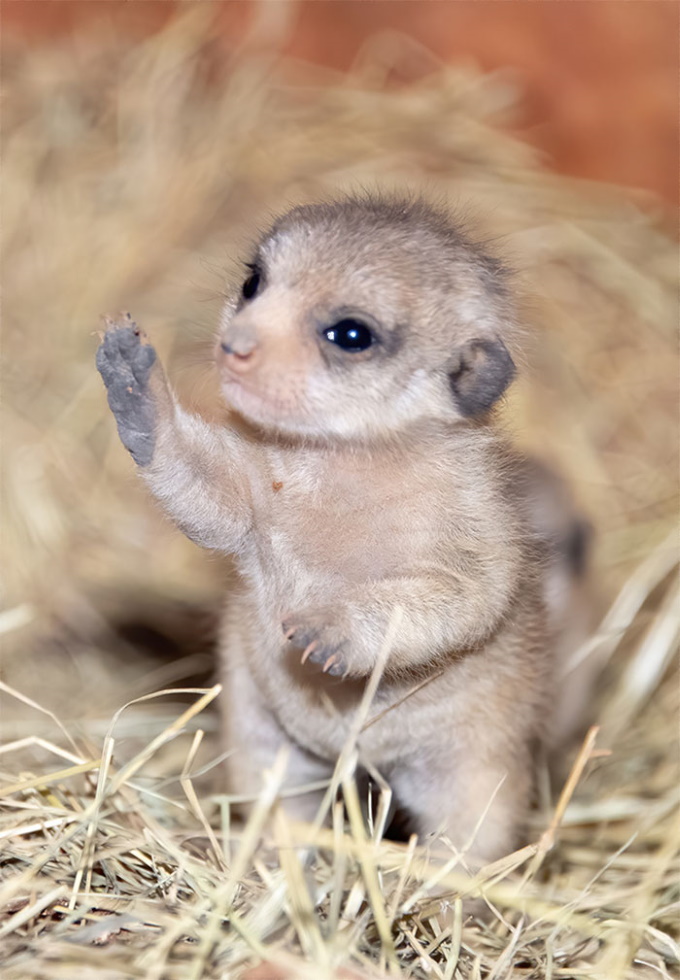 ”Squirrel-sized meerkats are mongooses, widely known for their upright posture. They often stand on their rear legs, scanning the areas over the southern African plains where they live. 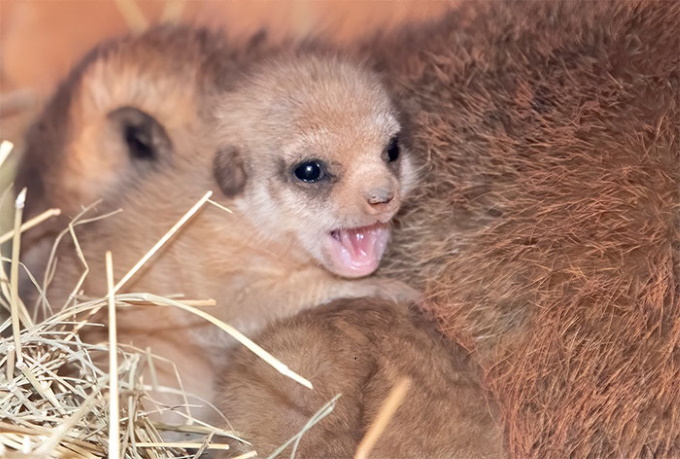 Many more of the meerkat family at Bored Panda.

There was a time when almost every year at the Oscar ceremonies, several Hollyiwood stars would speak up for political or humanitarian causes in their acceptance speeches.

That doesn't happen much anymore but last Sunday actor Joaquin Phoenix spoke and it is worth a listen.

As Mental Floss explains, a team of researchers has created an app that reads Geoffrey Chaucer's 14th century masterpiece, The Canterbury Tales in the Middle English in which it was written.

”The app includes a 45-minute narration of the 'General Prologue,' and the researchers have plans for at least two more apps, which will focus on The Miller’s Tale and other stories.

“If you’re not exactly well-versed in Middle English, don’t worry—the app also contains a line-by-line modern translation of the text, so you can follow along as you listen.”

What surprised me is that I can (and you will, too) understand parts of what is being read – parts where the English hasn't changed much.

One of the contributors to the project was Monty Python member Terry Jones who was – surprise to me – a medievalist.

"[His] two books on Chaucer and translation of the 'General Prologue' are featured in the app’s introduction and notes. Jones passed away on January 21, 2020, and this was one of the last academic projects he worked on.”

There is more information at Mental Floss. You can download the app at Google Play and iTunes. Or you can just go listen to it at the online desktop app like I did.

The artist, James Cook, tells us on the YouTube page that these are various scenes around the Essex countryside in December 2019.

”The three 'typicitions' were partly-drawn from observation. I spent no more than 3 hours at each location and completed these drawings indoors (where it was nice and warm.) These drawings were typed on my 71" Adler Tippa and 56" Oliver Courier typewriter.

I once had a really long cat but I think most of these are longer. Take a look: 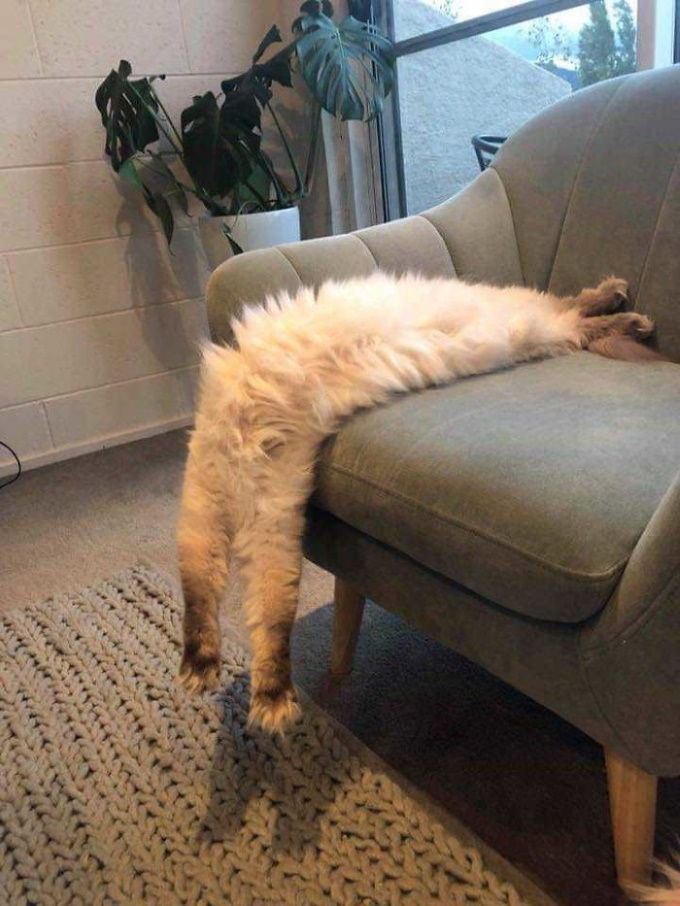 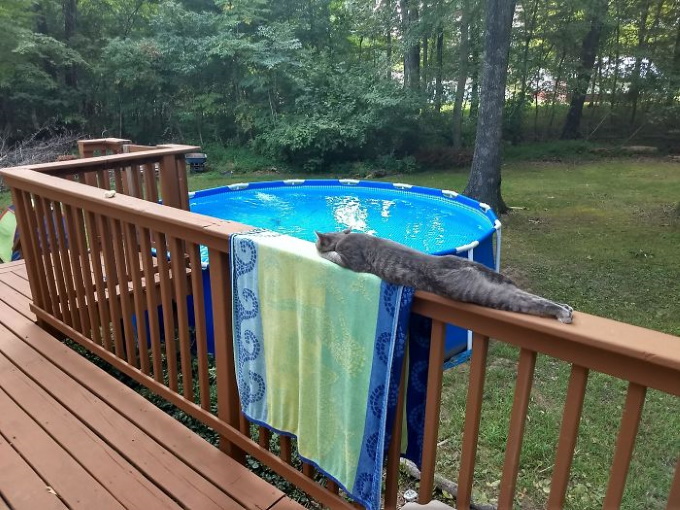 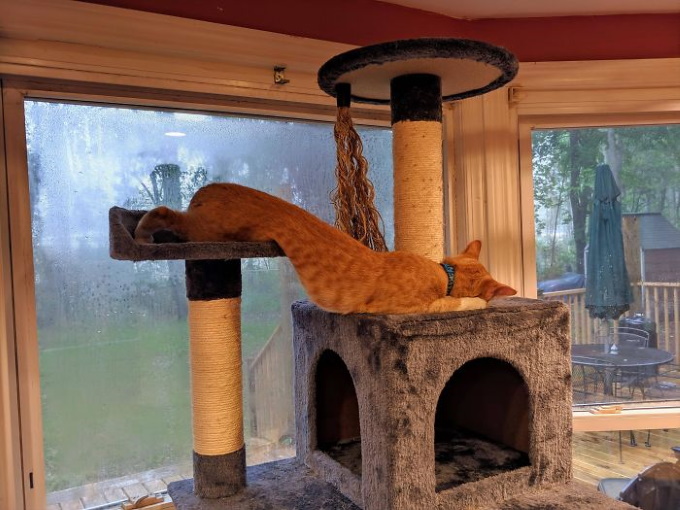 ”THE DAY DEMOCRACY DIED” SUNG BY THE FOUNDING FATHERS

So many of you sent this video that I almost stopped opening my email program this week. Featured in order of appearance are: George Washington, John Adams, James Madison, Thomas Jefferson, Benjamin Franklin, Alexander Hamilton and John Jay – to the tune of American Pie.

This short animated film from Matthew A. Cherry, tells the story of an African American father learning to do his daughter’s hair for the first time.

The film won the Best Animated Short at the Oscars this year. Thank my friend Jim Stone for sending it to us.

I don’t know how I can spend so much time on youtube, yet this is my first time seeing any of these wonderful videos. From that laughing baby to the Sony short about black hair, just loved them. “The Day Democracy Died”, so sad & brilliant. I hope that after that… blight is elected out of the White House, we don’t have to listen to different GOP congressmen sharing their “real feelings” about McDonald, and how relieved they are he’s out of office. NONE of them (save Mitt Romney) are no better than him.

Oops, getting sidetracked here! Thank you for the interesting stuff, Ronni :-)

Thanks Ronni, for giving us another great start to Saturday!

Thanks Ronni, always good to have a smile.

Loved the Democracy video, er, except there were a couple of put downs of lesser educated voters. Just makes me squirm a bit.
Loved the looooong cats, and the Oscar winning short.
Well when it comes right down to it, it’s all good with the exception noted above.

Ronni, I tried to donate but Paypal set up this ridiculous screen (called Paypal plus honey) where I have to join their new plan and I can't get past it. Did anyone else have this problem? Frustrated!
Adele

The Day Democracy died was put together by some brilliant people. The animations took some hours of work I bet.

You need to scroll below the honey ad until you can choose "donate with Paypal" or "donate with a debit or credit card."

Thanks. Couldn’t do it on my computer but was easy on mu IPad. Go figger!
Adele

Ah, Chaucer! Wonder if centuries from now people then will look back at our English with the same need to translate some of it?