This is Oscars weekend and I managed to dig up this marvelously funny Oscar-related clip from The Graham Norton Show in 2017.

Patrick Stewart (check out his socks) and Ian McLellan are the guests. McLellan, who played Gandolf in the Lord of the Rings films, does a pitch-perfect impression of Maggie Smith (Professor Minerva McGonagall in the Harry Potter movies) when he ran into her at an Oscar ceremony.

This year's Oscar show will air on ABC-TV on Sunday at 8PM eastern U.S. time.

WHAT THE PRESIDENT TWEETED AFTER THE ACQUITTAL VOTE IN THE SENATE

Terrifying that a president does this:

Due to the virus outbreak, China canceled a lot of lunar New Year celebrations. Here's a story about the traditional lanterns – huge ones – made in a small Chinese Village.

WHAT IF BEING AN OLDER CUSTOMER...

"The decision was made by the group’s science and security board, in consultations with its board of sponsors, which includes 13 Nobel laureates...

"In a statement accompanying the clock’s advance, the organization said the nuclear and climate dangers 'are compounded by a threat multiplier, cyber-enabled information warfare that undercuts society’s ability to respond.'

"'The international security situation is dire, not just because these threats exist, but because world leaders have allowed the international political infrastructure for managing them to erode,' it said."

There is more to read at AP.

This short film was a 2013 Oscar nominee and has been viewed on YouTube more than 180,000,000 times. It's the shortest film ever nominated. Produced by PES.

(There are two other short films in the same vein – sequels - linked at the end of the video. They are clever too but this one, the original, is the best.)

Beginning 1 October, 2020, if you plan to use your state-issued ID or license to fly within the United States, make sure it is REAL ID compliant. If you are not sure if your ID complies with REAL ID, check with your state department of motor vehicles.

Here is a video about it.

There is more information at the Department of Homeland Security (DHS) webpage and the Transportation Security Administration (TSA) website.

SLANG FROM THE AMERICAN COLONIAL PERIOD

That period in U.S. history ran from 1607 when America was just a group of British colonies to the signing of the Declaration of Independence in 1776. The settlers brought the English language with them and Mental Floss provides us with 15 slang terms from that period.

Here are three to get you started.

KEDGE
When someone asked how you were doing, you might have replied, “I’m pretty kedge.” It’s a bizarre but wonderful term that essentially means being in good health.

CIRCUMBENDIBUS
From 1681 something unnecessarily roundabout - like someone telling a rambling story or taking a weird road when driving somewhere,

There are 12 more at Mental Floss.

KITTENS IN THE BOOK SHOP

Kittens! And lots of them! Playing around and napping among the books. And probably reading Dr. Seuss’ The Cat in the Hat when no one’s looking.

The best part is, you can adopt any of the cats in the bookstore and give them the forever home they deserve. Cats, coffee, and books. Does it get any better than that?

The kitties are at Otis & Clementine’s Books and Coffee, Halifax, Nova Scotia and so far, there is a 100 percent adoption rate. Here are three of them. Well, three photos, but more cats than that. 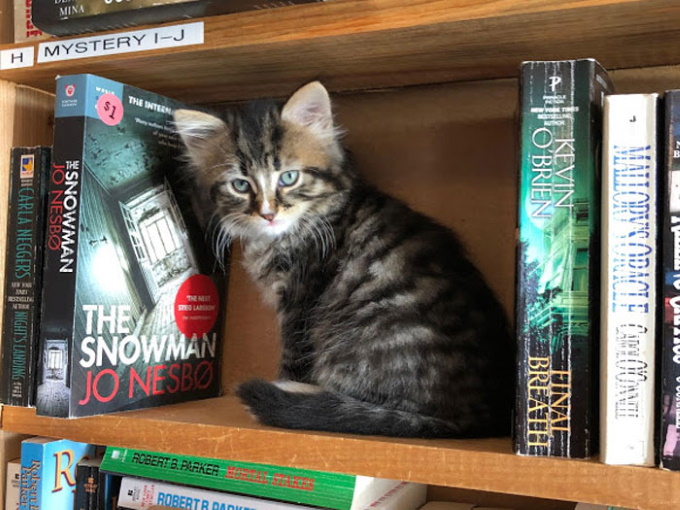 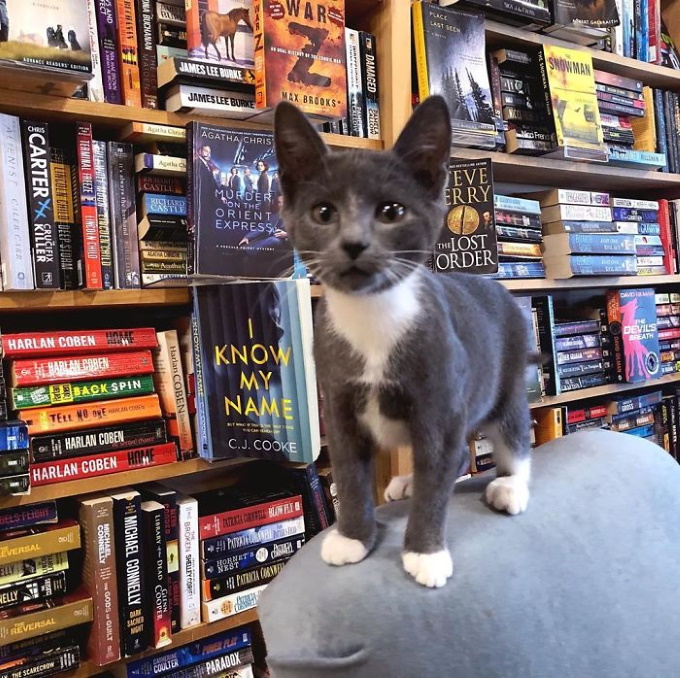 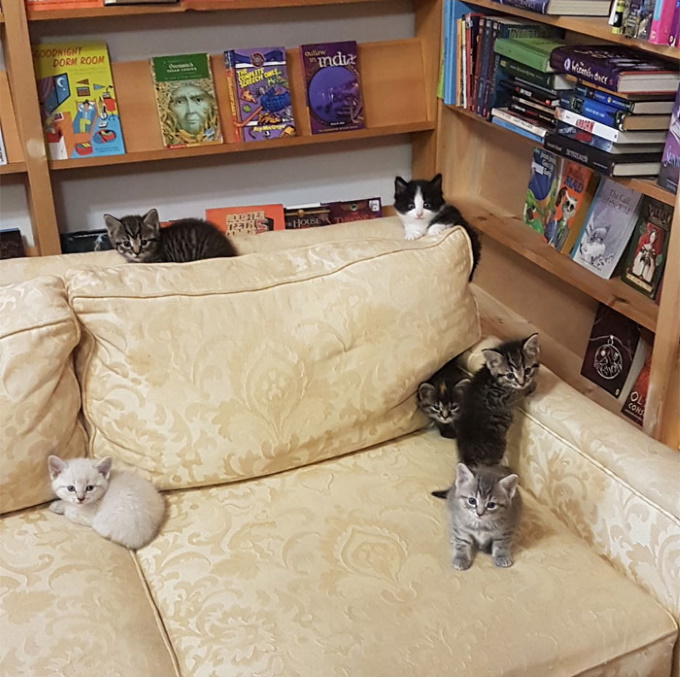 Ronni, hope you're doing pretty kedge this snowy (well, in Pittsburgh) morning. I would've commented an hour or so ago, but clicked on that Bored Panda link to see more of those awesome bookstore kittens and... isn't that one of the best sites ever?? I am now having one of those "where the heck did my morning go" moments.

That Fresh Guacamole animated short film is mind blowing – I really liked it. But I did not like D. Trump wacko tweet showing a fake Time magazine cover with his name as president until 2028 and beyond; he is truly delusional. What was shocking to me is the apathy of the American public to the revenge firing of Lt. Col. Vindman, a Purple Heart recipient and 20 years service military (and the firing of his Lt. Col. brother as well.) I have watched Memorial Day events where everyone thanks the military for their service – so ?? He testified following military rules.

I am pleased that you ended up with the adorable kittens; such sweet furry little creatures. Too bad the book shop is so far north from Tennessee – or I’d go there tomorrow.

I've never seen a kitten that I didn't instantly want to scoop up and take home. I'm afraid in that particular store I'd never get around to looking at the books. (But I'd probably be there every day.)

The guac video is fabulous. It should have won!

What Vagabonde said, plus, those kittens!

One thing you can say about Trump is, he surely is modest. He demonstrates a twistical manner as he takes the Presidency down a circumbendibus road.