Pancreatic Cancer. Plus The Alex and Ronni Show

Even in a jam-packed political week in the United States when the Iowa caucuses took place on Monday, the State of the Union address by the president on Tuesday and the impeachment vote in the Senate on Wednesday, I spent a lot of time being distracted by pancreatic cancer.

Because I've been living with it since 2017, that shouldn't be notable. But I have felt unusually healthy in the past few months and I was thinking about well-known people who live with the same disease.

”Before he was a member of the U.S. House of Representatives, Lewis was and remains a key figure in America’s civil rights movement. A key ally of the Rev. Martin Luther King Jr., Lewis was the youngest speaker at the 1963 March on Washington, representing the Student Non-Violent Coordinating Committee, of which he was the chairman.

“In 1961, as one of the original Freedom Riders, he was beaten and bloodied as they rode through the South addressing laws prohibiting black and white riders from sitting next to each other on public transportation.

“The 1965 attack in Selma, where Lewis has said, 'I thought I saw death. I thought I was going to die,' sparked nationwide support, sympathy and horror and spurred Congress to move on what became the Voting Rights Act of 1965.”

Lewis was unable to attend the presentation of the award at Wayne State because he is undergoing treatment for pancreatic cancer.

In a 1 January interview, Representative Lewis told an AJC reporter,

“'As you well know, I will be going through something that I have never been through before,' Lewis said. 'I have had friends and colleagues who have gone through similar situations. I will be talking and learning from them and obeying my physicians.'”

Me too - obeying my physicians which has worked our pretty well. And I wish with all my might that it will do the same for Representative Lewis. We need people like him in Congress, and more like him.

I don't know Lewis. I've never met him and I've never lived in 5th Congressional District in Georgia so he has not been my representative.

But if I had lived there, I surely would have voted for him in every one of the 17 elections he has won and I would vote for him again in November this year. There are not many in public life these days who are as decent and good and honorable as Lewis.

Pancreatic cancer is way down the list of cancers in terms of prevalence. Number 12 behind much more common cancers as breast, lung and prostate – the top three. But it is one of the top three deadliest.

Is that the reason, I sometimes wonder, that I feel a kinship with anyone who is diagnosed with pancreatic cancer. Even people I don't know. Maybe that is how Jeopardy! host, Alex Trebek – who has been treated for pancreatic cancer since early last year – felt when he was quoted on the website of radio station WABE in Atlanta:

“We’re starting a new year, and let’s see if we can’t both complete the year as pancreatic cancer survivors,” Trebek said when asked what he would tell Lewis. He noted they’re the same age, 79.”

At his announcement of the diagnosis, Representative Lewis told the AJC,

“'I’ve been in some kind of fight – for freedom, equality, basic human rights – for nearly my entire life,' he said. 'I have never faced a fight quite like this one.'

“He added, in a message to constituents, that he might miss a few upcoming votes as he undergoes treatment, 'but with God’s grace I will be back on the front lines soon.'”

Yes. Please. Here's is a photo of Lewis at the Pride Parade in Atlanta in October 2019 posted on the AJC website. 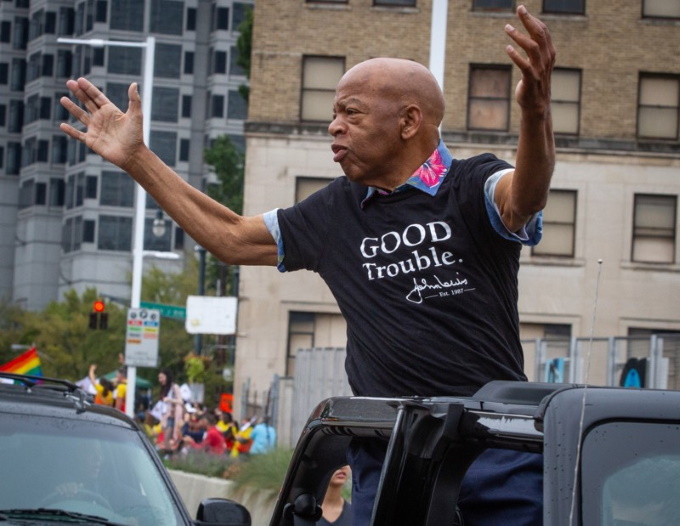 Amidst all the political hullaballoo this week, my former husband and I recorded a new episode of The Alex and Ronni Show on Tuesday.

You can find Alex's show – Alex Bennett's Ramble – on Facebook and Apple Podcasts.

Rep. Lewis I voted for repeatedly during my two-plus decades living in his district. I have been following, cheering, and drawing inspiration from his moral clarity and nonviolent leadership since the ‘60s.

Rep. Lewis is my hero. When we walked across the Selma bridge on the 50th anniversary of those bad times I reflected on his courage. He's been courageous all his life.

A warm, terrific piece on Rep. Lewis…. I’ll be silently rooting for him as I do for you, Ronni. Enjoyed the Alex & Ronni Show too (of course, always do). I found it amusing—well, sad but amusing still—of Alec’s “opinion” of Trump’s SOTU being right on target despite you guys taping this hours before said address. These last couple days, hell hath no fury like a megalomaniac scorned.

Thank you for your warm talk on Rep. John Lewis; he is a remarkable man and a true Great American. Having lived in greater Atlanta for 47 years (part-time with Nashville in the last two years) I have been able to witness his continued fights for justice for all. I still vote in Georgia and even though I am not in his district I get his emails and contribute to his re-elections.

In 2013 Rep. Lewis had a book signing in Decatur. I bought 3 books and he signed all of them, taking time to talk to me when he heard my accent and then shaking my hand; he also patiently waited while I took his photo for my blog. He is known as the Conscience of the United States Congress and it is well deserved. All his life he has worked against hate and bigotry (there is still so much work to do…) He even placed his life in danger for it (arrested 40 times during the Civil Rights Movement and placed in handcuff 45 times.) Because of reading your blog I understand that this cancer is not an easy one. I hope that, like you, both Rep. Lewis and Alex Trebek are strongly working with their physicians and health professionals to obtain the best results possible.

My dad lived with pancreatic cancer for seven months. It's through this disease that I found your blog, Ronni. I'm pulling for you, Alex, And Mr. Lewis. I hope you all get enough time to see more of your dreams come true.

It has become impossible to listen to your conversation with your ex husband. I had to turn it off half way through. You criticize and contradict nearly everything he says. He is such a nice guy to put up with it. It really shows you at your worst.

PBS had a wonderful profile of John Lewis recently. I realized how little I really knew about him, how true he has always been to his principles....an integrity so lacking in so many these days.
And off topic, a friend sent me a link to a This Ameican Life piece on Delight which I recommend highly in these parlous times (and if you have mentioned this already, Ronni, apologies). This American Life, #692 (January 31, 2020), The Show of Delights. The whole show is a spirit-lifter.

I might be mistaken, but didn't Rep. Lewis recently die?

A man of great dignity and integrity. I NEVER thought I'd say this, but so is Mitt Romney.

My sister sent me a link to nominate persons for the John F. Kennedy Profiles in Courage Awards and I nominated Adam Schiff and Mitt Romney.

Funny, I stopped listening to the Alex & Ronni segments ages ago, because Alex was always interrupting Ronni. But I wasn't going to say so out loud :-)

Irma - You were probably thinking of Representative Elijah Cummings from Baltimore, MD.

Yellowstone: you're absolutely right! I stand corrected. My apologies to Rep. Lewis. What's the quote? "The rumors of my death are greatly exaggerated".

It seems like pancreatic cancers is not that common because it tends to hit the best and brightest. Look at the current roster, you Ronnie, the beloved Congressman Lewis, Supreme Court Justice RBG and Alex Trebeck. That is quite a lineup of humanity and talent.

The world needs you all and I wish you all the best outcomes possible.

Hi Ronni and the gang. Yes, we do draw inspiration from others going through similar experiences as us, whether it be physical disease, mental health, or whatever, particular the rigors of old age. Politics should be one of the last things on our mind at this stage, at least politics that gets us all worked up--it's just not good for us and we should see that we can't influence many people or global trends much anymore anyway, even if we weren't invisible and people would seek us out for wisdom and guidance. On that note, since it seems to always blead into this blog, usually led by the proprietor, I try to deal with it and not get worked up and keep coming back hoping that politics might fade from the discussion--it nearly happened today, nearly. So, I'll add that I'm pretty excited about Trumps many victories this week--economy, emollients court decision, Gallop Poll approval ratings, acquittal, outstanding state of union address and etc. What a leader! I'm heading to the Alex and Ronni Show next--I enjoy it very much but do fast forward when you two wax socialist/progressive. I disagree with Gail about your suppressing Alex--he is irrepressible!

My husband of 56 years lived with pancreatic cancer for 14 months. I wish you energy and days of pure joy. As a cancer survivor myself, I learned how special people seem to gracefully continue living each day as it comes. Good idea for the rest of us.

Took time to listen to your latest gab fest and find your exchanges with Alex entertaining which I think is what is intended. I think the manner in which you both interact seems to be quite informal, straight forward, honest, civil and with just the right touch of humor edged sometimes in irony, sarcasm. Your short circuiting of some topics when they begin to go off into minutiae is appreciated 'cause that would lose me. I, for one, thoroughly enjoy the politics injections, especially since so prominent in our U.S. life and even around the world.