Peter Tibbles, who lives in Melbourne, Australia, has been handling the Elder Music section of this blog on Sundays for about 10 years, and doing a spectacular job of it. His knowledge and taste are peerless.

I don't like to interfere with such fine work but now and then, I have a little something to say about music. Today is one of those times.

This came to mind when I first met my new physical therapist who tends exclusively to feet. I wrote about that last Friday. It turns out she had lived, studied and worked in Manhattan for several years and loves it as much as I do.

Our conversation reminded me of a 1946 record album (remember 78s?) about New York City that I last mentioned here way back in 2009 – “Manhattan Tower”. I sent it to her and took a listen myself, which I had not done in several years. I found myself smiling throughout, while feeling all warm and fuzzy.

There is a back story to this. 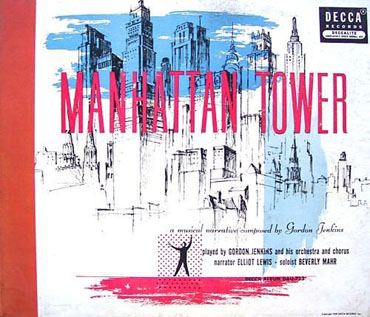 I was a little girl of no more than five or six when my parents obtained the album at its first release. It made such an impression on me that I made it my own. I played those two 78s hundreds of times over many years and I am convinced it is what began my love affair with New York – nothing else explains my yearning, from earliest childhood, to live there.

The album is a love letter to New York City, a suite composed and conducted by Gordon Jenkins with the lead performances sung by Eliot Lewis and Beverly Mahr. Never heard of them? Me neither – except on this album.

There are four parts – Magical City, The Party, New York's My Home and Love in the Tower. The arrangement can sound overblown and schmaltzy nearly 75 years later and maybe it is. But there is something about music from our youth that persists.

In the 1950s, a new version of “Manhattan Tower” was released adding many more songs including what was a big hit for Patti Page back then, Married I Can Always Get.

I don't like all these extra tunes so I never listen to that version. The 16-minute original seems to me to be too perfect to mess with and I discovered that I still know every word of the lyrics.

Music from our youth tends to stick with us as we get old. And we can often recall events from our younger years more easily than what we had to dinner last evening. So maybe you, too, have some early music memories that you still love.

Here is the original ”Manhattan Tower” from 1946, the full 16-minute suite - for those of you who don't find it too treacly.

There is now a Wikipedia page with a background on the album and more recordings of the original and subsequent longer versions at YouTube.

My paternal grandmother gifted me with the 33 1/3 rpm album in the mid/late-1950s, and I loved it. A few years ago, having bought an mp3 file of the album, I found the pieces (in your words) too treacly. Tastes change. BTW: I've lived in at least 7 of the United States, from coast-to-coast; but, have only spent about one week in Manhattan - in 2007. It was a wonderful experience.

I was doing volunteer disaster response work with the American Red Cross, working in the Manhattan FEMA office. Each Noon, a different FEMA employee took me for a walking tour (each tour, to the employee's personal taste), picking up lunch on the way. Having specified that my hotel should be within walking distance of the office, I was housed in China Town. The cops all pegged me as a visitor right off, I had a couple of them tell me. I actually waited for traffic lights to change - at an intersection.

The things that impressed me most about NYC were the helpfulness of its denizens and the wonderful quality of it's tap water, about which I commented in your original posting about Manhattan Tower.

Oh! On a business trip to Long Island in 1982, I did wander around the area in my rental car - getting lost enough that I found my way to the NYC fire fighter's training grounds. The fire fighters were charming and helpful. As a single woman, at the time, I was tempted to change professions to work for FDNY. An idle thought. FDNY probably hadn't that much need for an aircraft dynamicist.

"The things that impressed me most about NYC were the helpfulness of its denizens and the wonderful quality of it's tap water..."

Cop Car - for all the 40 years I lived in Manhattan, I forgot how good the tap water is until I was out of town and was so surprised at it when I returned home that it was so good.

And, by the time I moved to New York, like you I had lived in several big cities around the U.S., I'd always heard how unfriendly New York City is - but again like you, it turned out to be the friendliest place I've ever lived.

I can’t believe I never heard that piece before. My mother a lifelong New Yorker was a great champion of the city and I loved it too. I spent 50 years there with the exception of a year in San Diego and two in Guam.
At 50 I left the city but it never left me. At 71 I still get chills when I fly in and see the beautiful skyline from above. I still love the subway despite the crowding and delays and nothing comes close to riding the Staten Island ferry at 6 am with a cup of coffee and the glorious sea breeze and the sun starting it’s ascent or watching the sun go down over Eastchester Bay and the Bronx from City Island.

Thank you, thank you for posting this. Like you, I played the original 78s over and over again until they wore out. I was born in 1943 in Manhattan. My parents had come to New York in 1929 and stayed until my father came to California in 1944 to break into the T.V. industry. He was a write (soon to be Blacklisted during the McCarthy era).

When the album came out in 1946, they got a copy and it touched my soul and still does. I cried throughout the whole thing. It hadn't heard it since I was a child and there are so many memories of the past, taking my son to New York for his 21st birthday and a recent trip where I walked the streets (Thank you for building the Highline Park) and visited the 911 memorial for the first time.

Isn’t that the most wonderful album! As you said-a love letter to Manhattan. I still have the album on 48 records tucked away somewhere among my souvenirs.

My roommate and I moved to Manhattan in 1953 after graduating from nursing school in Philadelphia. We were very much in love with the city, loved every minute of our two year stay there and we knew that album by heart. It still warms and delights me to hear it...brings back wonderful memories. Thank you for posting this.

Thank you for posting this. I had never heard this, but it evokes memories of other music from the fifties that was played over the school intercom for occasional episodes of what was called "music appreciation." The music was always orchestral and lively and always painted mental pictures that I found exciting and invigorating. This certainly does that too. What is it about that time that led to the creation of so much music that was soul-stirring, comforting, and inspirational? Whether stand alone records, or movie and television soundtracks and theme songs, I am immediately transported to another time and place when I hear them and can instantly identify the era. I've never been to NYC and wish there was a video accompaniment of some sort. Or perhaps there is somewhere?

I never heard "Manhattan Tower: before college in the mid-'50s, then it became background music while I prepared to move as soon as I graduated to Greenwich Village and the glamour job my high school yearbook had predicted for me. I got it. Never looked back, still am in the Village, still thrilled every day to be at the center of the universe. (Yes, I know. I know. I understand why everybody hates us.)

About the accusations of unfriendliness, I'm convinced the accused are commuters, not New Yorkers. When I'm trying to help a tourist, another local is apt to interrupt and offer help too.

You mentioned a song added to the original "MT," Ronni: While visiting NYC weekends on college weekends we explored everything exotic (by '50s standards) we could think of, including a gay bar. My memory is still vivid of every dude in that cellar ex-speakeasy dancing, emphatically singing along with "Married I Can Always Get." Little did any of us know how that would eventually shake out. The bar is still popular--now as a jazz joint.

“...7 million keepers of the flame...” I did not know of Manhattan Tower; thanks, Ronni.

Not a native, I moved to New York in 1984. Recently I had an epiphany when I watched a few episodes of “That Girl” on Netflix or Prime. While I didn’t remember any particular episode’s plot, I certainly remembered Ann Marie, her dad Lew, her boyfriend Donald, and, oh, oh, those fabulous 1960s outfits Marlo Thomas wore each episode. And the theme song to the show, playing while the camera swoops and Ms. Thomas gazes - starstruck - at New York’s sights.

Television was our babysitter, or maybe mother’s helper, when my sister and I were kids. We watched a lot. Now I am convinced that a seed was planted and it’s because of That Girl that I am in New York. How ridiculous!!

Yes! Patty-in-New-York. Before tv, AM was as pervasive. All day and all night on the principal--CBS--radio station in the town where I grew up pre-tv, it was New York New York New York. I don't know where my craving came from to be in The Room Where It Happens, but radio gave me its location. ...

Peter Tibbles, heads up! While talking music, radio, and New York, now on 10 March, let me point out to all so inclined that Columbia University's FM station, WKCR, streams and broadcasts Bix Beiderbecke 24 hours EDT annually on the anniversary of his birth--today.