It has been a full year now since Jeopardy! host, Alex Trebek was diagnosed with pancreatic cancer. He took the opportunity to update everyone on his condition. Obviously, I relate.

Last weekend, a mega-ice storm hit homes on the shore of Lake Erie. Take a look:

There is a full story along with a large number of breathtaking still photos of the frozen houses at Huffpost.

If it feels like you just turned back your clocks, you are not far off. We just did that in the U.S. on 3 November 2019, and now it's time again to turn them forward one hour tonight. 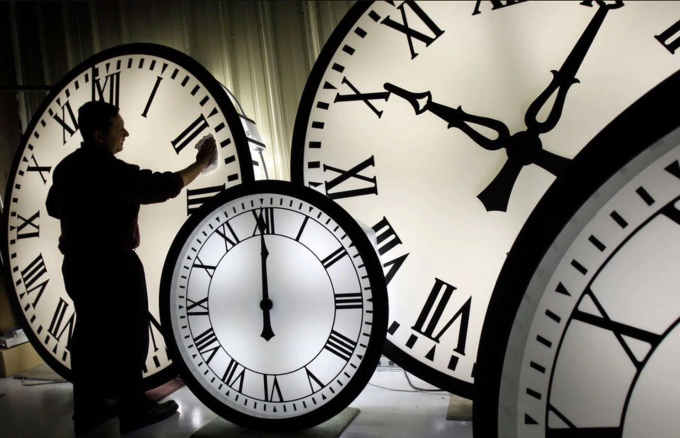 Cell phones, computers, tablets and some other tech toys reset themselves. For some reason I have a lot of analog clocks. Grrrrrrr.

Jahmani Swanson tells us he is 4-foot-5 but he carries himself like he's 6-foot-5.

”This basketball player, who goes by the nickname Hot Shot, plays to win. Born in the Bronx and raised in Harlem, Swanson is the shortest Harlem Globetrotter in the team’s history.

"People typically see height as the ultimate advantage in basketball. But players who underestimate Swanson because he is a little person soon regret it.”

A WHITE PEACOCK SHOWS OFF

TGB reader Joan McMullen sent in this idea. What can I say except Wow.

The Booksellers is a documentary film about the New York City rare books world. The YouTube page for the trailer tells us:

”Antiquarian booksellers are part scholar, part detective and part businessperson, and their personalities and knowledge are as broad as the material they handle.

“They also play an underappreciated yet essential role in preserving history. The Bookselleers takes viewers inside their small but fascinating world, populated by an assortment of obsessives, intellects, eccentrics and dreamers.”

There is a list of upcoming screenings at the film's website along with a contact form so you can ask when The Booksellers will show up in your town, and there is a good story about the film at The Guardian.

On Wednesday, the Inspector General of Social Security, Gail S. Ennis, issued a warning of a new tactic by government imposters to reach — and victimize — Americans by phone.

”We have received reports of text messages on cell phones that appear to come from Social Security,” said Ennis. “The texts warn about a Social Security number problem. They ask the recipient to call a number back to resolve the problem and avoid legal action.

None of this is real. It is a scam.

”We have received reports of text messages on cell phones that appear to come from Social Security. The texts warn about a Social Security number problem. They ask the recipient to call a number back to resolve the problem and avoid legal action.”

Do not believe it. Do not call the number. Find out all the information you need at the Social Security Website.

Too many old people live alone, don't get out much and are lonely. Some experts say loneliness is epidemic. Here is a lovely, little animated story about that.

Nadine, depressed and alone, has been living her life in the dark. A gift from a friendly neighbor gives Nadine something to live for.

Wait until you see all the different animals that use this log bridge in a Pennsylvania forest over the course of a year. Thank TGB reader Alan Goldsmith for this.

Dear Alex, I've always liked him, though never watched his show. The Bridge was my favorite. And thanks for the telephone scam heads up............though these days should anyone do any business with someone over the phone who they don't know? NO!

The white peacock is stunning! So interesting to see what nature creates. Love the log bridge. I hope "The Booksellers" comes to my area; yes, I sent an inquiry. Happy to see the Alex Trebek update.

I love "The Log" trail cam videos, as does my cat. She was watching one just yesterday morning.

I've read that he will not publicize where the spot is that he is filming, fortunately.

I look for you each morning, and you brighten my day! Thank you!

Enjoyed this week's videos. One of the other videos showing up in your You Tube link was an excellent and moving documentary about Thalidomide. I was extremely nauseated during my pregnancy with my older son in 1960. If my doctor had given me one of the samples inundating the medical field in the USA then, my son might have been born disabled. Thanks to the vigorous and relentless efforts of the woman in charge of such things then (sorry, I didn't write down her name), its use was not approved in the USA. Astonishingly, there are still Thalidomide-affected babies born in some countries. Some of the doctors and scientists that developed the drug were former Nazi doctors. This documentary is of a horrible, horrible story that nevertheless is filled with hope and joy.

One day last week I had several calls from a number in DC telling me that my Social Security was going to be cut off, along with few other things. I was sick, bored, and decided to call them back.

I put on my best stressed, teary voice, with a real-sounding cry now and then, and talked to the (Indian sounding) woman who answered the phone. Through my crying I gave her a name. While I continued to cry and tell her how upset I was, she asked me several times to spell my name. When I finally did, after the first few letters - F U C K Y - she hung up.

The Booksellers documentary looks great -- and it includes one of my favorite New Yorkers -- Fran Lebowitz! Although it's unlikely to come to my city, I see that screenings are scheduled at a couple of cities within a few hours drive, so a day trip may be in order soon.

I have seen some of the footage of the log in the past, but I'm pretty sure there's much here that I had not yet seen -- the bobcat shots are gorgeous! I have a friend who, a few years ago, started a foundation to educate people about bobcats and fight to reduce or eliminate the hunting of these beautiful animals who are once again being hunted in Illinois, for no good reason other than sport or profit. I have bid on a permit to hunt them for a few years now, and finally got one in 2019. The purpose is to get people to not exercise these permits. So for $5 I was able to keep one bobcat from being hunted and killed in Illinois. Small acts, multiplied by many people can make a difference.

The SS scams are shameful, and it's hard to imagine people being taken in by these things, but I did like Joyce's response.

The white peacock display was stunning, but the sounds of the humans in the background were very annoying. Why can't people just quietly observe and appreciate such things?

One thing I loved about our small town was all the book stores we had when we moved her in the early seventies. There was one dusty ol' book depository up some stairs above businesses street-side. Eventually the gentleman whose book store this was aged to the degree he retired and sold his store to a young couple. They remodeled and cleaned the store, refurbishing and re-arranging the books lining the shelves, making the older books much more attractive and accessible when last I visited. Then one day several years ago I read in our local newspaper the bookstore hadn't been able to survive and closed permanently. We no longer have any of the numerous bookstores that once were so prominent. I miss them.

Another SS scam I appreciate knowing to look out for. I've probably already received it among those calls I allow to go to my answering machine, then delete without listening to the entire spiel.

I never knew there was an all white peacock -- most unusual. I'm always intrigued with wildlife so enjoyed the log creatures.

As for loneliness when living alone, if this becomes an issue for us as we age, we really must be open to the gestures of others and reach out to some, too, as many have had difficulty doing even during their younger years.