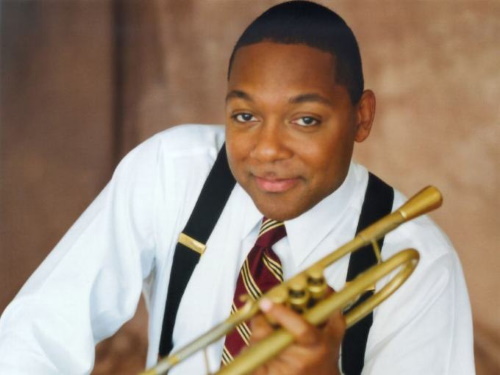 WYNTON MARSALIS was born and bred in New Orleans which gave him a head start in this whole music lark. He was born into a musical family – his father is a jazz pianist and three brothers are also jazz musicians and it looks as if the next generation is going in that direction as well.

It seems that when Ellis, his father, was sitting at the table one day with Al Hirt, Miles Davis and Clark Terry (holy moley) he joked that he might as well get Wynton a trumpet too. Al gave him one, thus from the age of six he was already blowing his own horn (sorry about that).

Wynton studied classical music at school and his father taught him jazz at home and he eventually ended up at Juilliard studying classical music. Wynton is adept at both genres (and others as well) as we’ll see. 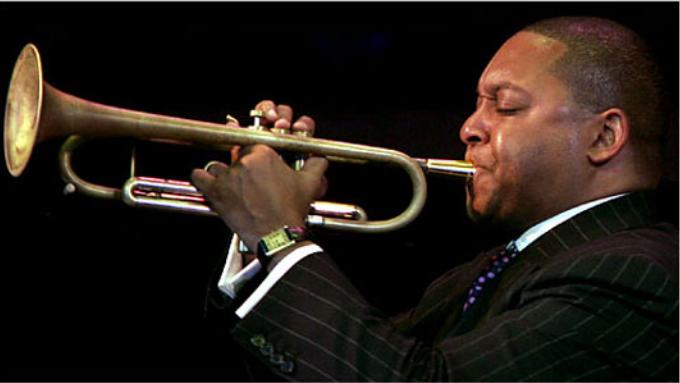 Wynton recorded six albums under the title “Standard Time” that delved into the history of jazz and popular music in general. I’ll be playing selections from some of these today starting with number one.

This album consists of ballads mainly from the thirties, tunes you’ll all know, particularly this one, A Foggy Day, written by George and Ira Gershwin. Wynton has always been generous towards the other members of his groups, such that he ensures that each gets a turn in the spotlight.

From another of the “Standard Time” albums, this one featuring the music of Thelonious Monk, we get the tune Hackensack. The tune is reasonably well known, but on the album Wynton generally plays lesser known ones. 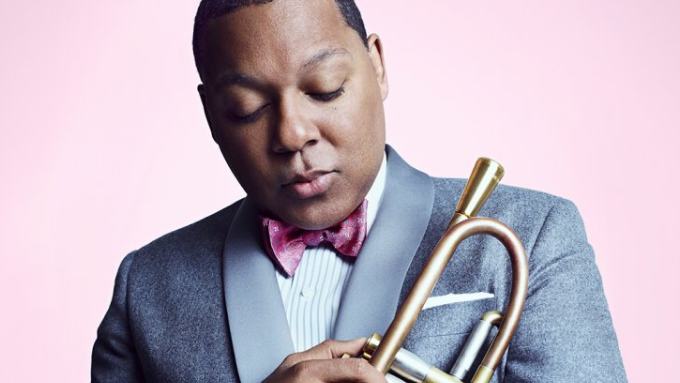 Wynton writes music in different styles, including classical music. He’s written several symphonies and I’m going to feature part of one today, the fourth, also called The Swing Symphony. It owes a lot to Leonard Bernstein and Duke Ellington, and Wynton has acknowledged that himself. Here is the third movement, subtitled Midwestern Moods. 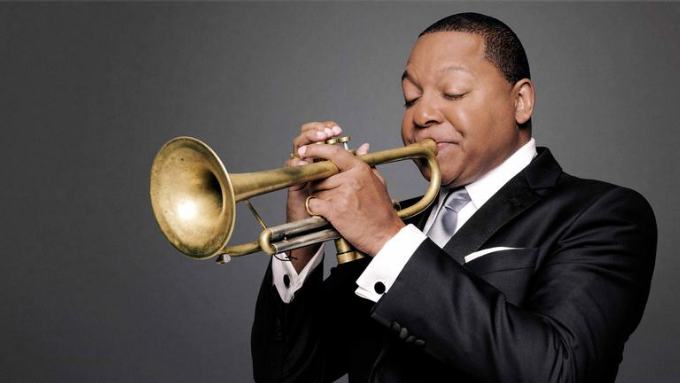 Buddy Bolden is the great mysterious figure of early jazz. He’s credited with inventing the music and it was said that he was a superb improviser. No records of him exist and the closest we can get is with the music of those who played with him, including King Oliver and Bunk Johnson.

A bio-pic of his life was recently released with Wynton playing his music. From that we have the tune Didn't He Ramble, a famous early jazz tune. 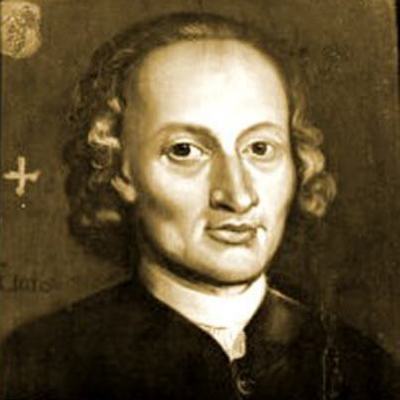 Pachelbel’s Canon is one of the most played pieces in classical music. It’s used, probably over-used, for all sorts of things.

JOHANN PACHELBEL didn’t write this with trumpets in mind, however, Raymond Leppard, head honcho of the English Chamber Orchestra, scored it for three trumpets, perhaps because he thought that it might sell a few more records as John is very popular with classical music buyers.

Anyway, he succeeded in giving a rather tired old warhorse a kick in the nether regions and turned it into something rather interesting. At the time of recording, Ray couldn’t find two more trumpeters of the quality required, so Wynton played all three parts. So, here he is three times with Pachelbel’s Canon for Three Trumpets and Strings, P. 37. 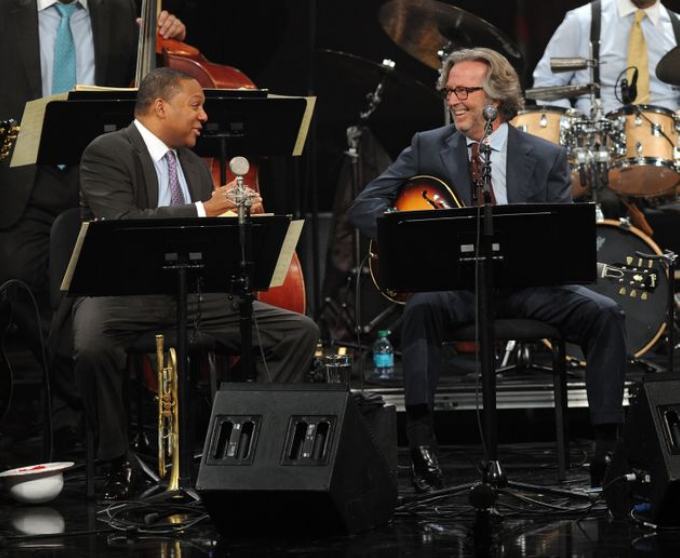 ERIC CLAPTON has a vast amount of music behind him. There was one stage when he tried to disappear, pretending that he was just a member of a group called Derrick and the Dominoes. We weren’t fooled, but this aggregation produced probably his finest hour on record with the song Layla.

He had the help of an equally fine guitarist, Duane Allman, on that track (and others on the record). Duane is no longer with us, but Eric has performed the tune in several different settings, including this one, a jazz/blues interpretation with Wynton, probably unrecognizable to fans of the original. 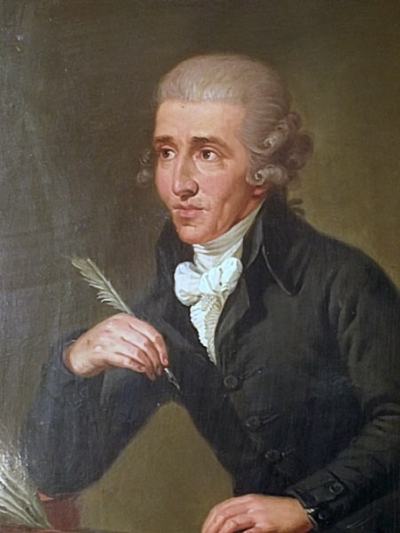 JOSEPH HAYDN wrote concertos for pretty much every instrument because he had a decent orchestra at his command, thanks to Prince Paul Esterházy who employed him (and them).

Jo wanted to keep his musicians happy, and they liked a spot in the limelight to strut their stuff. One of his works was the Concerto for Trumpet and Orchestra, in E-Flat Major Hob.VIIe. Here is the first movement.

♫ Concerto for Trumpet and Orchestra in E-Flat Major Hob.VIIe (1) 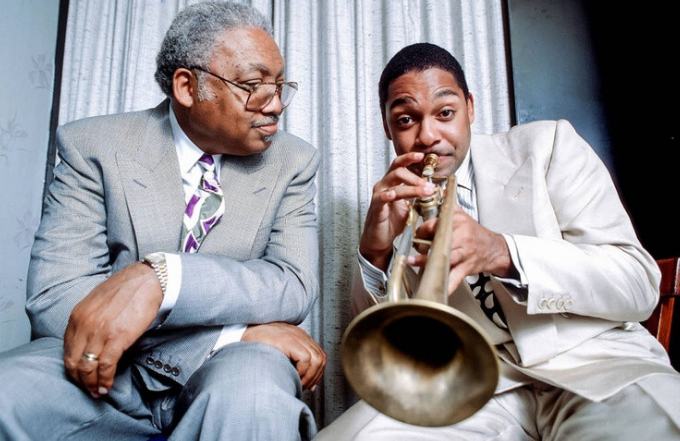 The third of the “Standard Time” albums consists of standards from the thirties and forties. Wynton is joined by his father, pianist ELLIS MARSALIS on this record.

The song they perform is I Cover the Waterfront which has been recorded memorably by Frank Sinatra, Billie Holiday, Sarah Vaughan and many others.

♫ I Cover the Waterfront 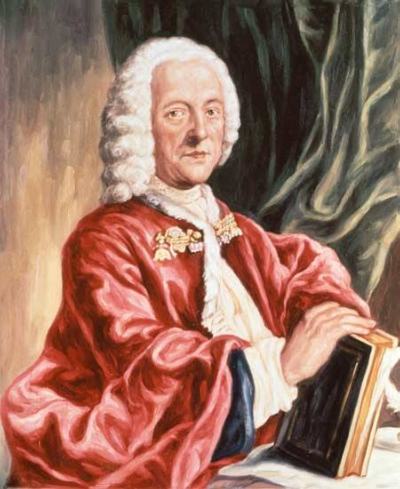 As with Pachelbel, above, Wynton again triples himself. I imagine that when GEORG PHILIPP TELEMANN wrote his Concerto in B-flat Major for Three Trumpets and Orchestra he couldn’t envisage that the one person would be able to play all three of the trumpet parts.

Of course, doing that in concert is a different matter. Here is the first movement of his Concerto in B-flat Major for Three Trumpets and Orchestra.

♫ Concerto in B-flat Major for Three Trumpets and Orchestra (1) 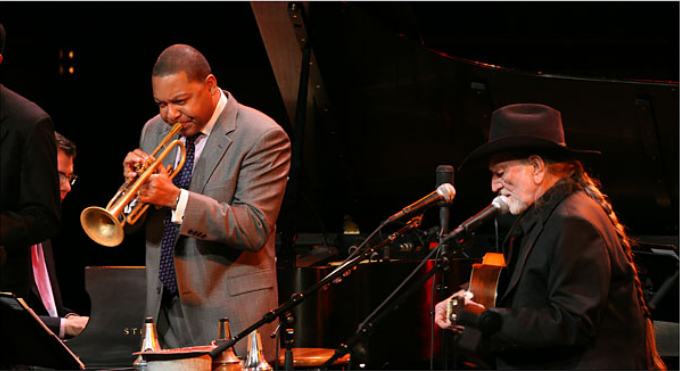 On his never ending quest to play with every musician on the planet, WILLIE NELSON has performed in concert several times with Wynton. A couple of those have been recorded. These show what I’ve always suspected: that Willie is really a jazz musician.

From one of those we have one of Willie’s compositions, Night Life. I had culled the songs I was going to include down to three and asked Norma, The Assistant Musicologist, which I should use. This is the one she insisted on.

Wynton and KATHLEEN BATTLE have performed and recorded together a number of times. 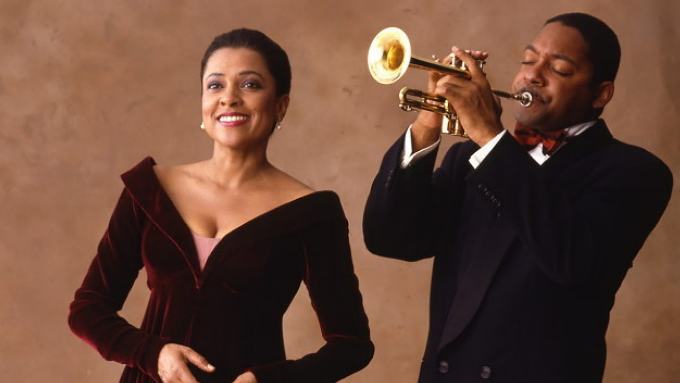 Kathleen has a reputation for being “difficult”. I find that when women are described that way it means they are intelligent, strong and don’t suffer fools (mainly men) gladly. I don’t know if Kathleen fits that description, but I’ll give her the benefit of the doubt.

From their album of Baroque music, we have Mr Handel’s Eternal Source of Light Divine (Ode for the Birthday of Queen Anne, HWV 74). 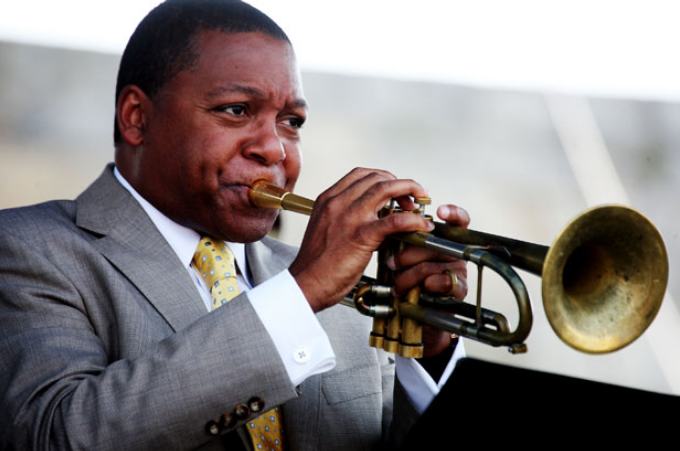 The sixth in the “Standard Time” series is subtitled “Mr. Jelly Lord” and is devoted to the music of Jelly Roll Morton, one of the most important figures in the development of early jazz.

Wynton shows what a fine scholar he is of this style of music, but he doesn’t treat the music as museum pieces, they really swing, as he demonstrates on Black Bottom Stomp, a good way to end the column.

Peter, wonderful selection¡ Many Thanks.

Look forward to listening to these selections in the time ahead since I especially like jazz, and also enjoy select classical and semi-classical music. Interesting tie-ins and connections you make. I did pay tribute to Ellis Marsalis on my blog when I learned of his death last month. Son Bradford is also a talented jazz musician who has performed with Wynton and all three have played together.

I think Wynton was the driving force behind Ken Burns' jazz special. Burns' reportedly was unfamiliar with jazz but immersed himself in it for a year, he said, as he put together his special. This is likely when Wynton became very influential, possibly with an agenda of his own as to how he wanted to see jazz presented. Some accomplished jazz musicians, jazz history educators while appreciative of the Burns'/Marsalis perspective have expressed some reservations as to that view and lament the omissions.