A DUCK FAMILY: A DAY IN THE LIFE

We live in a time of 24/7 bad news. Every morning while reading the news, I checked the virus cases and death numbers. Awful, as usual.

The virus is more to deal with each day than most of us have faced in a lifetime. But we also receive almost daily revelations of a president and his federal government appointees whose cruelty and corruption are rampant with no checks in sight.

We could all use a calming break. This day-in-the life video of a duck family with several babies who are about five weeks old helps.

The Lincoln Project, they tell us, “is an American political action committee formed in late 2019 by several prominent Republicans. The goal of the committee is to prevent the reelection of Donald Trump in the 2020 presidential election.”

Earlier this week, the superpac released an anti-Trump ad on Fox News that it says, brought in $1.4 million in donations to continue its work. Facebook has slapped the video with a “Partly False Information” label. See what you think:

DEPARTMENT OF YOU CAN'T MAKE UP THIS STUFF

I'm quoting Digby in that headline and she is, of course, correct. While Trump was touring the Honeywell face mask factory in Arizona on Tuesday (while not wearing a mask), Live and Let Die by Axl Rose was blasting in the background. Take a listen:

HOW NEW ZEALAND BEAT THE CORONAVIRUS DOWN TO ZERO CASES

And did it in just seven weeks.

President Trump's son-in-law, Jared Kushner, stepped in it when he told TV cameras that the U.S. strategic national stockpile does not belong to the states. It is “ours,” he said, meaning – well, that's hard to know. The Trump family? The White House? Who is "ours".

The Guardian reported on the bioluminescent waves recently seen off the California coast.

”The event occurs every few years along the coast of southern California,” reports the paper, “though locals say this year’s sea sparkle is especially vibrant, possibly related to historic rains that soaked the region and generated algal bloom.”

China's official Xinhua news agency released an Lego-like animation mocking the U.S. response to COVID-19. It is titled Once Upon a Virus. Thank my friend Jim Stone for sending this along.

THE ALEX AND RONNI SHOW

Last Tuesday, my former husband and I recorded our biweekly chat and I haven't had time to post it until now. I'm pretty sure we mostly talked about the virus.

THE BEST CAT PHOTOS I'VE SEEN IN A LONG TIME

”...a kitten called Edmund arrived. For the next two and a half years, he was a force of nature in our lives until he was taken from us by a hit-and-run driver on the quiet country lane where we live. I took thousands of photographs of him during his short life, here are 40 of my favorites.”

Here is a sampling of three. 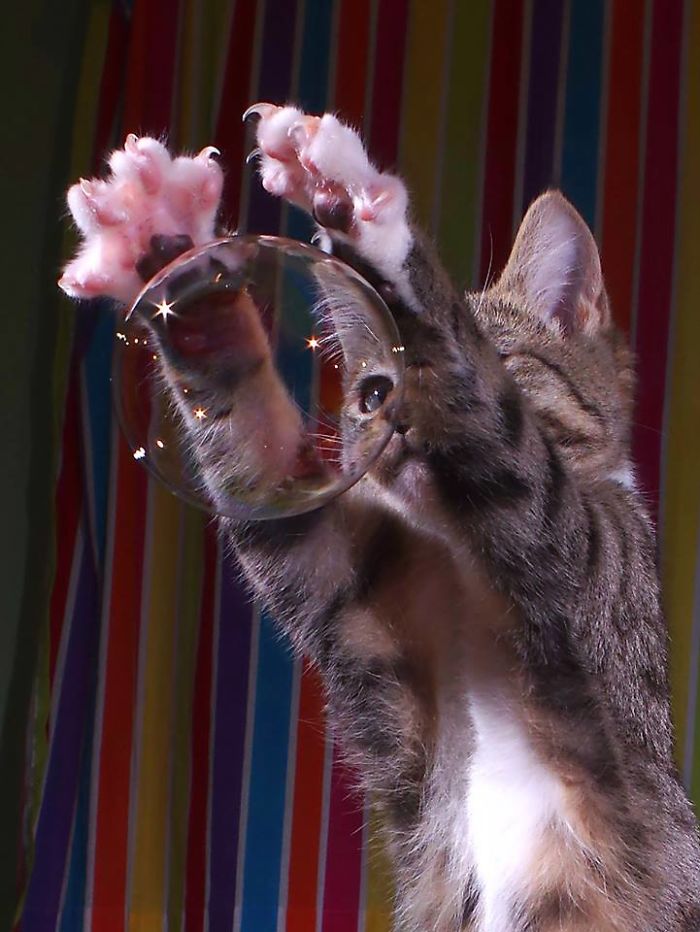 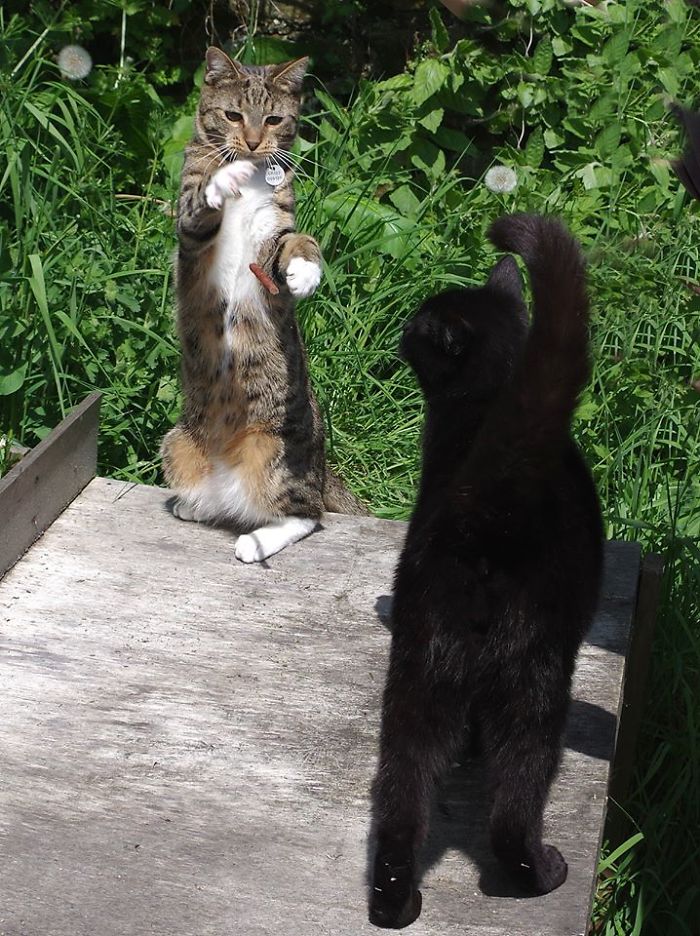 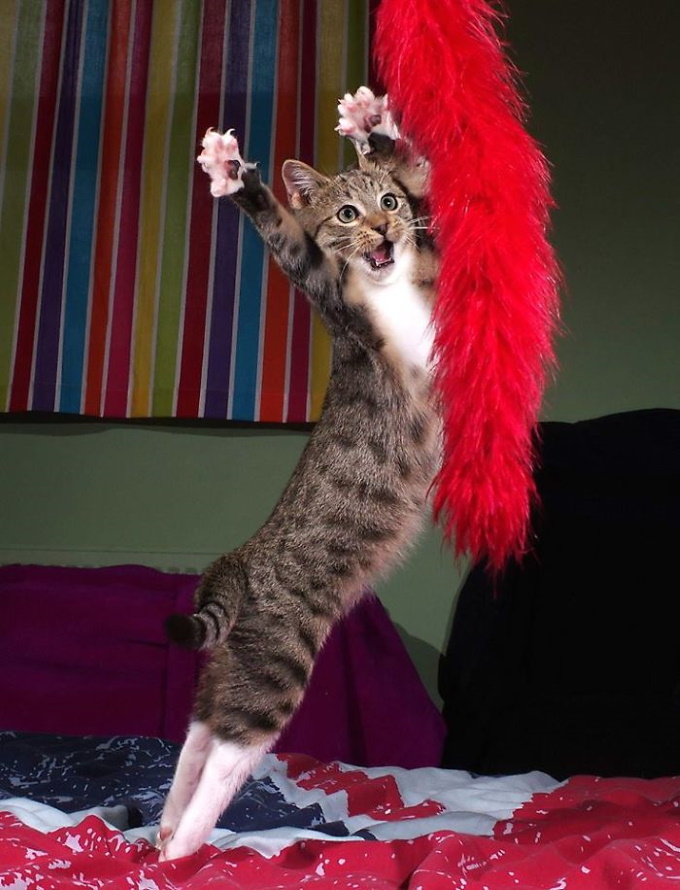 There are 37 more gorgeous, fun and funny photos of Edmund at Bored Panda.

FB is becoming a dictator in it's own way. I hate they filter comments on my thread. Do they tell us what is 'partially true' on that ad? Looks all true to me.

Love the ducks and the cats (what a photographer on the latter!) You'd have to split hairs some mighty fine hairs to dispute the Lincoln Project ad. And the stockpile? Everything and everyone in Washington is there because the states put them there. In other words, "all your stockpile are belong to us."
Kushner and his grotesque father-in-law can take a long walk off a short pier together.

Love Edmund. I do wish people would keep their kitties inside for their own good.
Trump would and will decide who the stockpile is for..kinda like the medical supplies and we see how that went.

Every time I see a news video on or from New Zealand, I'm both amazed & envious. As for that little lego movie from China.... we sure had that coming, thanks for nothing Donald Trump!

The Edmund photos really should be all seen, that sweet cat was all personality--and thank you for another Alex & Ronni Show.

It DOES feel like we have no real leader right now, which is why I never miss Governor Andrew Cuomo's daily press briefings. (I just wish Tom Wolf, my own state's Democratic governor, would be a little more forthcoming.)

I'm sure the background music was lost on Trump but I'll bet that there were a few employees smiling underneath their masks.

I loved the duck video. I live inland, and whenever I am at the shore I always make it a point to rise early and watch the sunrise over the ocean. I've found some live streams of those, and it is helping me endure this time. Facebook certainly chose an odd time to begin to assess the truthfulness of content! Yet another strike against Facebook in my opinion. And as for Kushner, I wish somebody would tell him that the stockpile belongs to US, the taxpayers. Cannot wait for this corrupt family to be a distant memory. I need a shower every time I read about them.

Oh Ronnie, I just watched SNL and the very last skit made me think of you...and NYC.

All my best,
Celeste

Of course, I loved it. I had to remove the link from you comment.
For a bunch of reasons, TGB does not allow links in comments but
people will be able to find it knowing its SNL.

Thank you for sending this, and stay safe,
Ronni

A new comment from
“Celeste Pugh” was received on the post
“INTERESTING
STUFF – 9 May 2020” of the blog “TIME
GOES BY”.
Comment:
Oh Ronnie, I just watched SNL and the
very last skit made me think of
you...and NYC.
https://www.nbc.com/saturday-night-live/video/may-9-snl-at-home/4163519?fbclid=IwAR35TSp-lpup9Vkq2iTG5B9I4pSeB_T_c5Gkbd1pPJoT_db-gsqP_uZmqRU
All my best,
Celeste