Home About Archive Contact
From Sex to Old Age, From Ram Dass
ELDER MUSIC: Classical Whatnot 3

SPANISH OPERA HOUSE REOPENS WITH A CONCERT FOR PLANTS

Next Monday, Barcelona’s Liceu opera house will reopen. A string quartet will play Puccini's Crisantemi (Chrysanthemums) for a special audience. 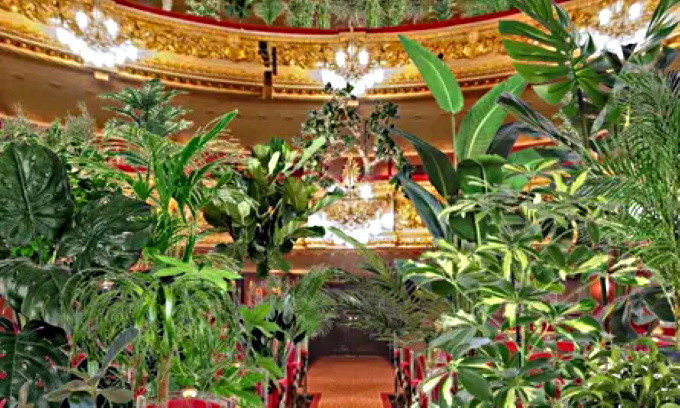 As The Guardian reports,

”Well aware of the need to return with a spectacle as grabby as a venus flytrap, the Catalan venue has announced a concert for 2,292 plants when it reopens next Monday...

“Eugenio Ampudia, the conceptual artist behind the concert, said it aimed to reflect what has happened across Spain and around the world as the Covid-19 pandemic has forced people to retreat from shared public areas.”

The concert will be live-streamed for humans at home.

“When the strings fall silent and palms have been duly pressed together in appreciation, the plants will be donated to 2,292 health workers as thanks for their efforts over recent months.”

Read more at The Guardian.

”The top floor of one of the city's active sanitation garages houses a very large and highly curated collection, assembled by ex-garbage man Nelson Molina.”

Definitely worth your time.

THE PROBLEM OF VIRUS EXPERTS' LIES

"Well, the reason for that is that we were concerned [that masks]...were in very short supply. And we wanted to make sure that the people, namely the health care workers who were brave enough to put themselves in harm’s way, to take care of people who you know were infected with the coronavirus and the danger of them getting infected."

Bad enough all by itself, but Digby elegantly points out how awful those lies are:

”Everything I have read about standard pandemic response is that it is vital for public health officials to tell the truth. If they don’t, they lose credibility and nobody will believe them when they give the public health guidance.

“Can you see the problem here? By lying to the pubic instead of saying 'we don’t have enough medical masks to go around so please just make a cloth mask or use a scarf or bandana' from the very beginning we might not be dealing with this nonsense where people think masks are some kind of political plot.

“Instead, they very adamantly insisted that masks were bad and would actually cause you to get the virus, even though they knew that wasn’t so. It was a major error.”

She is exactly right. I stopped listening to anything Dr. Deborah Birx says after she told us how Trump is “attentive to the scientific literature and the details.” A laughable assertion to any sentient being who has watched him speak.

A baby cow was spotted in a flooded field after Hurricane Harvey. She was very sick, but she fought hard get better. This is the story of Harveigh the cow.

THE LIFE OF DEATH

As you might imagine, these days death and all that it might mean is a topic not far from my mind. Recently, I rediscovered this short film, The Life of Death. From the Youtube page:

”...as Death goes about his daily job of taking the lives of animals in the forest, he comes across a lovely doe. He falls in love with her and can't bring himself to take her life and so they slowly become close friends.”

But in the end, the doe will teach Death that dying is also part of Life. The film maker is Marsha Onderstijn.

A New York City TGB reader, Ann Burack-Weiss, sent this video which has won a whole bunch of awards. The film maker, Majo Chudy tells us:

”It took nine months to capture a total of more than 40,000 shots. The video is composed of 24,626 shots...Just over three minutes of video shows incredible 929 hours of real time.”

Well, I didn't expect to cry my way through this newsletter, but here we are. Many thanks to you and your readers for sharing these amazing videos. They went right to my heart.

Loved it all. The Life of Death didn't fit much of anything I feel or think about death and dying, but I'm very happy that it was taken on in visual form.

I couldn't express it any better than Judith Henry. Loved this. Thanks to all. Many, many thanks to you, Ronni, for your kind and sharing soul.
Kathleen

The mask thing has made me furious from the get-go. I knew there was a problem when the guy in the White House said there wasn't. Then the medical personnel were begging for masks and personal protection equipment. That's when my friends started sewing masks at home. If the medical staff needed them so badly, what about the rest of us? It all seemed so strange. Well, it turns out it seemed that way because it was.

I knew from the get go the malarky about masks was just that as I’m sure anyone in the medical field knew also. Whatever makes people think lies are better than truth?

Enjoyed these videos. Calf’s story so touching. The life of death does depict how I can view life ultimately embracing death. Have always thought of death as part of life probably because of how my mother truthfully explained matters to me all my life, influencing how I have viewed life events. Now death draws closer to me. Will I be as welcoming when my time actually comes?

With regard to the masks...

As a Canadian, I was given a different perspective. As far as I know, nobody at any level of government here ever lied to us about mask-wearing. For sure there was some confusion at first, but not deliberate lies.

The top public health officer where I live in B.C. is Dr Bonnie Henry, whose perfect-pitch performance in guiding us through this pandemic has spread her fame far and wide. Even the New York Times covered her a couple of weeks ago, in an article titled "The Top Doctor Who Aced the Coronavirus Test".

From the beginning of the pandemic she was totally upfront with the public in her daily briefings, giving us every bit of scientific evidence available at the time.
When it came to the public wearing masks, she was cautious.  She told us that while medical grade masks were necessary for front line health care workers, trained in how to use them and confronting high viral loads as they worked with Covid-19 patients, the same was not necessarily true for the general public.  She didn't ever hide the fact that when the pandemic began, masks and other PPE were in short supply and desperately needed by health care workers.  But that wasn't the reason for discouraging public usage.

Her major concern seemed to be that wearing a mask would cause people to be more cavalier about all-important physical distancing, because they would have a false sense of security. Plus it would cause people to touch their faces more often (the second biggest no-no in preventing virus transmission) because they would be fiddling with their masks, wearing their masks the wrong way and then re-adjusting them, taking their masks off without washing their hands first etc.

And in retrospect she was absolutely right.  I have yet to see a photo of a crowd anywhere, that doesn't include people with masks hanging around their chins, masks not covering their noses,  hands on the mask trying to adjust it in some way; all of this while crowded together with others who definitely aren't in their "personal bubble".

Bonnie Henry took the approach that the top priorities for flattening the curve were physical distancing, not touching your face, washing your hands frequently and staying home and away from others as much as possible, especially if remotely unwell.   All of that worked.   BC has been highly successful in flattening the curve and keeping death rates low.

As more information became available over the past few months about how the virus primarily transmits, she agreed that public mask-wearing could be useful, particularly when in situations where keeping a physical distance of 2 metres was difficult or impossible.   But she still stresses that the other measures are key to stopping the virus.

I heard another well-known Canadian epidemiologist commenting awhile ago that the science around mask-wearing is more or less impossible, because there are so many factors that go into determining whether a mask will be effective or not.  What is it made of, does it fit the wearer properly, do they know how to put it on and take it off, how much viral load are they dealing with...

I do have cloth masks and also a face shield (which I actually think is more helpful, because it prevents absent-mindedly touching your face).  But I still think Bonnie Henry's advice is best. Do the things that we know for sure prevent this virus from spreading.  And masks are helpful if you know what you're doing.