Climate change has gotten lost in the pandemic news but some are paying attention. A few days ago the Swedish teenage activist, Greta Thunberg, won the one million Euro (1.15 million U.S. dollars) Gulbenkian Prize for humanity.

”...for the way she 'has been able to mobilise younger generations for the cause of climate change and her tenacious struggle to alter a status quo that persists', Jorge Sampaio, chair of the prize jury, said earlier,” reported The Guardian.

As Thunberg says in the video, all the prize money will be donated, through her foundation, to different organisations and projects who are working to help people on the front line, affected by the climate crisis and ecological crisis.

If you read The New Yorker magazine, you probably recognize Susan Orlean's name. As the Washington Post describes her, she is

”...an award-winning author of several books, including The Library Book and The Orchid Thief, and has received both Nieman and Guggenheim fellowships. Meryl Streep was nominated for an Academy Award for portraying Orlean in the movie Adaptation.”

”...the work that had her name trending on Twitter this weekend was a little different. See, Orlean got drunk Friday night, met a newborn foal and fired up the social media platform. And the ensuing thread — in which she bemoaned the state of the world, threw shade at her cat for not snuggling and recounted an epic quest for candy only to wind up with sugarcoated fennel seeds — proved utterly delightful.”

Here is a piece of it: 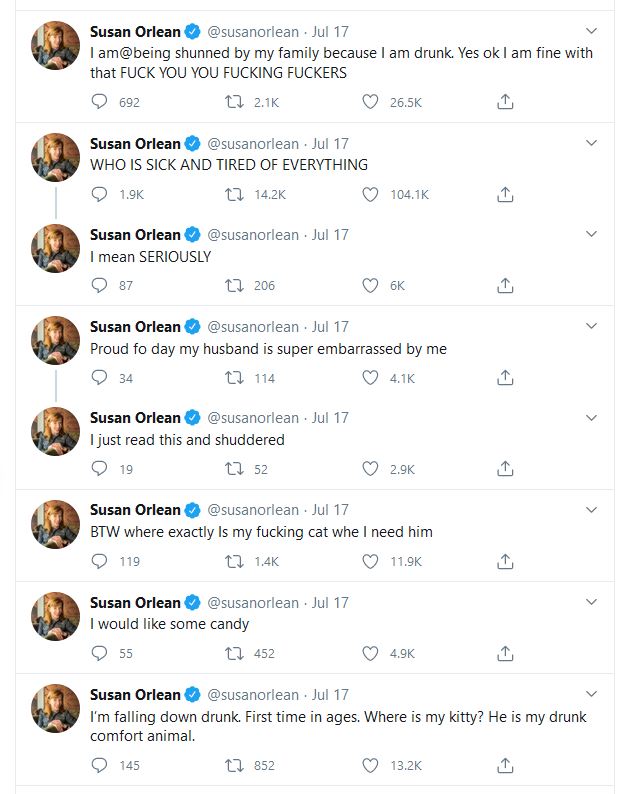 You can read her entire drunken thread here. And, it's worth following the WaPo link above to an interview with Orlean about her drunken tweet night.

This is such an excellent respite from our global troubles.

In last Monday's post I mentioned that Peter Tibbles, who writes Sunday's TGB Elder Music column is thinking over whether he will continue it in some form after I die.

In case you missed it, here is the response he left in the comments:

”I don’t think I’ll continue with the music column. I have seen with my own eyes the amount of work Ronni puts into producing each day’s column. I retired from the computer industry after 50 years and it and it seems to me that I’d be just going back to work, and I certainly don’t want to do that.

“Having done this for more than 10 years and about 600 columns I wonder if I have anything to add that won’t bore you all. However, you never know. I might become inspired and find some easy software and start again.”

THE ALEX AND RONNI SHOW

As we do every two weeks, last Wednesday my former husband, Alex Bennett, and I record a short chat I have dubbed The Alex and Ronni Show.

Usually, I post it on Friday but got carried away yesterday with a long discussion of the Gestapo tactics being unleashed by the federal government on cities across the U.S. Actually, Alex and I got carried away on that subject too. Here is the video.

Last Tuesday, two young boys in Grenoble, France, brothers age 10 and three, exhibited extraordinary bravery and trust in their fellow human beings by jumping from high floors of a burning building to be caught by people waiting on the ground:

Neither boy was harmed but at least one of the “catchers” was checked at the hospital for injuries. You can read more at Huffington Post and The Guardian.

Two groups of Republicans are carrying on an amazingly sharp and pointed video campaign against the re-election of Donald Trump – The Lincoln Project and Republican Voters Against Trump.

This week they came up with a remarkably similar idea for their latest videos:

In the law-and-order surge from the president in Portland, Oregon, there has been one small bright spot to give us a smile. She has been given the name, Naked Athena. Here is the story according to Snopes:

“Police officers in Portland, Oregon were caught off guard after being approached by a nude female demonstrator, who lay down in the street and began performing yoga. The cops were then filmed ‘withdrawing.’

“A woman wearing nothing except a mask and a beanie approached a group of officers clearing out the downtown area in the early hours of Saturday. A line of police and federal agents were standing at an intersection when the naked woman seemingly appeared out of nowhere.”

Here is some video from The Sun including some commentary on the protests from Trump:

Among all the turmoil and fear being generated, Naked Athena makes me feel happy for a little while.

CAT DISCOVERING IT HAS EARS

This cat discovering that it has ears is absolutely the best thing I will see today. pic.twitter.com/SDx80QOnAI

Peter, thank you so much for all the columns you've written. I love your classical selections, and I still have Jennifer Warnes and Jackson Browne singing Golden Slumbers bookmarked from 2016. Much appreciated. You definitely deserve a full and complete retirement!

Wow—so much to reflect upon here! Greta Thunberg isn’t just impressive, she’s a visionary. As for Peter’s music columns, I need to set aside some serious time to look at his earlier postings, having only discovered TGB a year ago... they’ve been a real learning experience for me. Always good to see a new ‘Alex & Ronni Show’, I watched it 2-3 days ago on Youtube... so much anguish, what a godawful shame there’s little room for much else in our lives right now.

100 days until the presidential election... my God I miss saner days.

But thank you for ending things with that terrific cat video—that was sweet, funny –AND- amazing!

This is simply the BEST Interesting Stuff column. Thank you, Ronni!

Awarding the Gulbenkian Foundation prize to Greta Thunberg is a perfect choice. She gives us hope for the future, and she is such a dear and bright young woman. Calouste Sarkis Gulbenkian comes from an illustrious Armenian family. Calouste was a great philanthropist; he gave great amounts to charity, the arts and for the support of Armenian culture, its people, and the Diaspora. He amassed a huge art collection; the Gulbenkian Museum in Lisbon is a top international museum and was the draw for me to travel to Lisbon.

These fallen Republican ads are the best, and they need to be viewed by the brain washed trumpists on Fox News. There is another group called VoteVet Ads – they have an ad on YouTube where they call DT a traitor. I enjoyed all your selections today – loved the kitty video.

A warning to y’all:
On Thursday I went to a large well-known store and used, liberally, the hand sanitizer they offered by the front door. When I left I used it again and let it dry on my hands as we are told. By that evening my hands itched terribly then it got worse. It got worse on Friday and last night to get relief I had to place them under water every 2 hours- could not sleep at all. The palms are red and itch something terrible, and the fingers are so swollen that I cannot close my hand. Here we are Saturday and they still itch and are swollen. So watch out what you use on your hands, some of the ingredients might be very toxic.

Regarding vagabonde's note on hand sanitizers, the U.S. Food and Drug Administration has listed 75 hand sanitizers as "toxic". You can get more information and see the list here.

Ronni, I enjoyed listening to your passionate opposition to the "Secret Police" in Portland. I am personally familiar with Chicago and agree the outcome is much more unpredictable with a higher potential to become deadly. My husband is so upset he's talking about sitting outside some where he'd be noticed and holding a sign in opposition. Honestly, even this simple act of defiance scares me because people are so hateful these days.

I knew about the Lincoln Project ads but not those from Republicans Against Trump.

Also, I really hope your are still with us to see the election outcome. You deserve to be because you care so much about defeating Trump.

Thank you once again Ronni. We’re all
going to need a boatload of cat and dog videos to make it to January 20

Distressing to me is the fact American “police”(?) of some sort who are supposedly citizens are acting in a violence-inciting manner against Americans who are exercising their constitutional right to peacefully protest. Those “police”(?) are breaking our laws in the way they are kidnapping(?) citizens off the streets of Portland in the name of law and order.

I wondered during WWII how German soldiers could blindly follow orders to commit the atrocities that occurred which some must have known was wrong. Now we have American men/women ordered to and doing the same to our people in our country. Now we see what happened in Germany. If our U.S. Attorney General’s allegiance to the oath of office he took to our country took precedence over any others, shouldn’t he act to stop what resembles an uninvited by local and state authorities invasion of Portland and threatens other American cities?

The cat always wins, of course, but what a great discussion between you and Alex. I agree that tRump and his minions are illegally deploying Secret Police/Brownshirts in the streets of our cities. These unidentified "police" are nothing more than tRump Thugs (aka "Trugs"), and I sincerely hope that someone comes up with a way to STOP them cold.

More and more, the U.S. is looking like 1930s Italy (Mussolini) and Germany (Hitler) with the added attraction of an uncontrolled pandemic with no end in sight. This situation is due largely to the tRumpies' gross incompetence, greed and care-less approach. tRumpism must be overwhelmingly and unmistakably rejected in November, not only in the Executive branch but also in both houses of Congress.

Ronni - doing the show with your former husband must be exhausting. I find your continuing stamina and good humor to be remarkable. I wish I had discovered your blog earlier. I wish you didn’t have any pain. Pain is just such a strange nonsensical phenomenon, where not otherwise necessary to protect us from inadvertent self-injury.