In at least this one Paris cafe, giant Teddy bears help, in a fun way, to enforce social distancing. 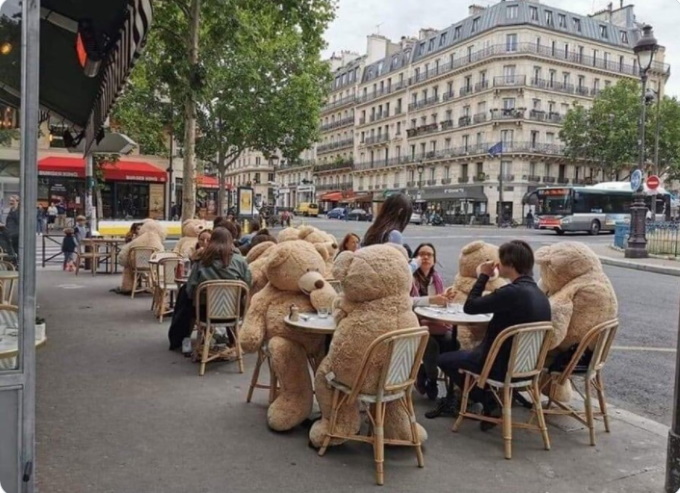 TGB reader Mary Evans Young sent this photo for us. I've seen this same technique in a couple of other photos around the web.

It has always charmed me that the two lions who sit in front the the main branch of the New York City Library are named Patience and Fortitude.

Last week, as part of the library's re-opening, they were given face masks. Take a look:

As the accompanying Vimeo story explains:

”Seeing a shape in the clouds, a face on Mars, or Jesus in your toast is called 'pareidolia.' Our tendency to perceive objects, patterns, and meanings incorrectly is a psychological phenomenon filmmaker Vier Nev turned into hypnotizing art in his transfixing animated film, A Mind Sang.

“Leading the audience through themes of transformation, perspective, and rebirth, this work of art kept us visually engaged through each second of the film with stunning optical illusions and a haunting and rich musical score.”

At the 2020 Annecy International Animation Film Festiva. the Vimeo team presented the artist with the Staff Pick Award.

You can read more here including an interview with the film maker, Vier Nev.

THE RETURN OF EIGHT “CURED” DISEASES

Diseases that had been all but eradicated are making a comeback. Among them, gout: 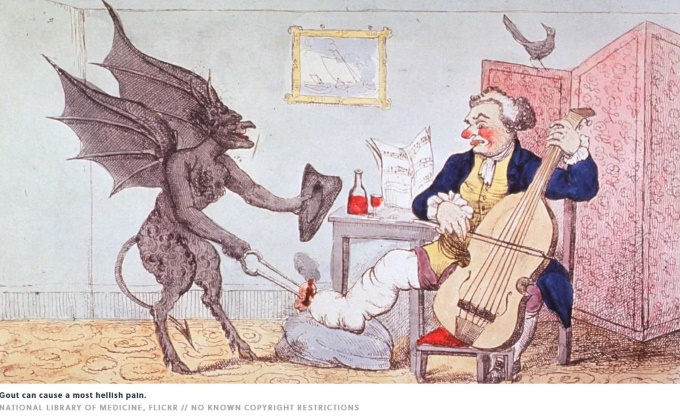 Actually, I'm pretty sure I am publishing this item mostly because the image amuses me. But as long as I've done that, according to Mental Floss,

”The first documented case of gout was in Egypt in 2600 BCE. Though anyone could get it, gout was known as 'the king’s disease' because symptoms most often presented themselves in royalty and the wealthy—Henry VIII and George IV both suffered from it.

“There was no cure, and once someone had one attack of gout, they were likely to get it again. The main symptom was unbelievably excruciating pain in a joint, usually the big toe.”

The incidence of gout has doubled in the United States in the past 50 years.

Measles, mumps and rubella, for which there is a vaccine, have also been making a comeback thanks to the anti-vaccine movement in the U.S.

You can read more about the return of these disease plus scarlet fever, rickets, syphilis and polio at Mental Floss.

Sunday's maestro of the TGB Elder Music column, Peter Tibbles, who lives in Melbourne, Australia, sent this video in which actor Russell Crowe explains down-under slang to us.

You might know some of them but I think most would be a mystery to us northern hemisphere folks.

Sarah Cooper is an American comedian and writer whose most recent work has gone. Her name has popped up all over the news and internet in response to her hilarious lip-syncs of unedited voice clips of Donald Trump.

I had read a couple of stories about her but had neglected to check out the videos until a TGB reader, who wants to remain anonymous, sent a link. Enjoy.

Another TGB reader, John Brayton, gave us this poem on last Monday's blog post about my new hospice status. It is titled The Merciful Hours. The poet is Paula Meehan who gave it to the Irish Hospice Foundation to commemorate the organization's 30th anniversary.

There were a lot of comments on Monday's post and you may have missed this so I am reprinting it today. And if you did see it, it is so much worth an extra reading.

Because we have known Death come the hard way —
knock at the door in the dark of the night,
all of us breaking with the shock of day —

this precious time to sit with our living
while they enter their peace, is pure gift.
It falls like healing light on our waiting

for heaven, or nothing, or another lifetime,
be we lovers or father or mother
or child to each other. Our mortal dream

is to step out together the long road home,
hand fast in hand whatever the weather,
whatever the twists and turnings to come.

So: to the vigil bring candles, bring flowers,
heart’s gratitude for the merciful hours.

SON SAILS THE ATLANTIC ALONE TO REACH HIS FATHER

The bare bones of the story is this from YouTube:

”When flights to his native Argentina were canceled due to the coronavirus pandemic, sailor Juan Manuel Ballestero hatched an ambitious plan: to single-handedly sail 12,000 kilometres across the Atlantic to see his parents.”

It took 85 days and he missed his father's 90th birthday but he arrived in time for Father's Day.

Read more at The Daily Mail and The New York Times.

”A family were fishing on a lake in Wisconsin when they spotted a bear with a plastic jar stuck on its head. After several attempts at moving their boat next to the bear and removing the jar, they were finally able to free the animal.

“'Never dreamt we would ever do this in our life time,' Tricia Hurt wrote on Facebook. 'Out on Marshmiller Lake yesterday with Brian Hurt and Brady Hurt when we spotted this poor bear. He made it to shore after all that'”.

The Parisian cafe teddy bears and the Lake Michigan Baby bear rescue! Oh the joyous ingenuity in saving a life (and, in Paris, possibly many more). Thank you.

Gout ... really? It seems kinda crazy that these diseases are making a comeback. We really need to get our act together.

I enjoyed the Sarah Cooper video. I'd not heard of her before so had to google and read more about her.

Gout is more prevalent in males, especially white. It is truly a curse. I first came down with gout about 1977 when I was less than 30. The doctor at San Diego general was fascinated. The only controller for gout is an ancient drug called colchicine. No one knows why, but it works. The drug is so old that it actually was grandfathered in by the FDA. No company got approval for a new pill until about 2009. Although gout is commonly found in the big toe, it can, and will, migrate to other joints in the body. The pain is unbelievable and opiates have little direct effect. Doctors have little training in this rheumatoid problem. I was given straight morphine with no effect before I realized that gout was visiting me again after a "vacation" of 10 years. I self prescribed an over dose of colchicine and resolved the problem. The hospital thought I was having a heart attack and did not identify the problem until I remembered the problem. Gout will cripple one and you wish you could die. Gout, though, is not fatal----just extremely painful. Etc., etc., ad infinitum ad nauseum. B

A friend of mine......very thin, well muscled, female marathon runner.......got gout! I had always thought of this as an over indulgent, wealthy person's disease, but no. I remember her eating a lot of celery to help it along.

SO glad the baby bear was able to swim on his way unimpeded by the discarded plastic jug that should never have been available to him anyway. As far as my own death, as I said earlier, I stand with Woody on this one point: "I just don't want to be there when it happens."

Hoo boy, that bear me tear up and then cheer - how fortunate it was saved! Sarah Cooper is outstanding.

I, too, can attest that gout is alive and well and painful as hell. I had one crippling bout, got it diagnosed, got a prescription for allopurinol, had one more brief, mild attack, and not a twinge since. Just a pill every day.

A friend from work (1976 - 2004) suffered from gout and consumed many cherries and much cherry juice because he found that it helped him. For the past few years, a neighbor up the street has picked cherries from my tree for his wife who suffers from gout. Fortunately for me, I have (so far) escaped such pain.

Beyond the anti-vaxxers, we have been avoiding medical offices since COVID-19 hit which means that many are foregoing their immunizations. Shortly after COVID-19 hit, I renewed my shingles "immunization" by getting Shingrix shots - at the pharmacy.

I’m way late commenting on your Interesting Stuff, but Russell Crowe and Sarah Cooper were excellent! And the bear! Brings to mind Winnie the Pooh! Well done to those people who helped out.