Home About Archive Contact
The Alex and Ronni Show – 21 August 2020
ELDER MUSIC: Together at Home 3

THE GIANT OTTERS OF BRAZIL

”The Pantanal: the largest tropical wetland on earth. Located mainly in Brazil, it’s home to a number of iconic species – like the giant otter, an enormous member of the weasel family.”

”These four fighter planes are part of the Breitling Fighters and are flown by some of the most experienced pilots in the world. The first plane is a P-40 flown by Ray Hanna, the second is a Mustang piloted by Nigel Lamb, the third plane is a Corsair flown by Cliff Spink, and the last plane is a Spitfire MH434 piloted by Lee Proudfoot.

“The canal is next to an airstrip in Yverdon-les-Bains, Switzerland so they had a safe place to land if they lost power.”

The testimony from U.S. Postmaster General Louis DeJoy on Friday did nothing to clear up the mess of the postal delivery slowdown and its threat to the November election.

Now, Axios is reporting that sports teams are investigating using their arenas and stadiums (stadia?) as voting centers. The idea seems to have sprung from More Than A Vote, a voting rights organization launched by LeBron James and other Black athletes:

”The goal is to connect teams with local elections officials and convert arenas into voting sites,” reports Axios, “leveraging their size (good for social distancing) and location (easy to access/find on a map)...

“The Atlanta Hawks, Detroit Pistons, Milwaukee Bucks, Sacramento Kings and Charlotte Hornets are among the NBA teams that have already established such partnerships...

Read more at Axios, at The Guardian and elsewhere around the web.

From my friend and attorney John Gear:

In case you had forgotten the Texas official who called for old people to sacrifice themselves to COVID-19. Sent by TGB reader Nana Royer: 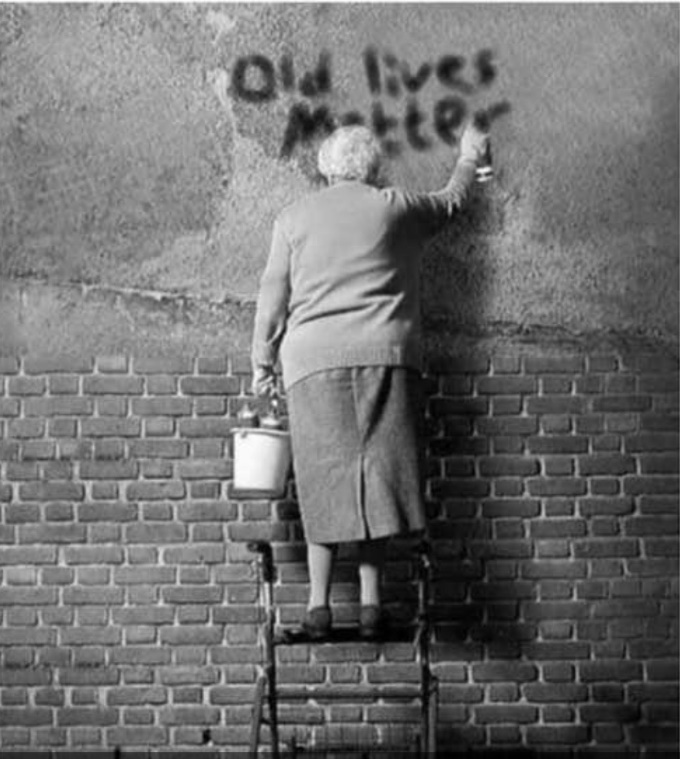 There weren't any recording devices in the 13th century so it's always interesting to me when I get to hear what something sounded like that long ago. Here's what this YouTube page tells us:

”They’re the Icelandic folk group Árstíðir. On this particular night, they had just finished a concert in Wuppertal, Germany, and were making their way back to their lodgings when they were struck by the station’s perfect acoustics. Its arched, stone ceiling created a cathedral-like environment.

“Despite the fact that this song, Heyr himna smiður, dates to around 1208 and the Wuppertal Hauptbahnhof station was built in the mid-19th century, the sound and the space seem perfectly suited to one another.

“At one point a public announcement is piped over an intercom. Instead of ruining the music it magically weaves a new voice into the harmonic tapestry.”

You can read more at Atlas Obscura.

”...because 22 August 2020 is the centennial of Bradbury's birth. A reading of his classic, Fahrenheit 451, begins streaming at 4:30PM eastern daylight time. The readers include writers, actors, librarians and young people such as William Shatner, Neil Gaiman, Susan Orlean, Carla Hayden, Marjorie Liu and many more. Here is a taste:

You can read more about the event at Rolling Stone.

I have come to believe that even though there are people who consider cat videos the dregs of the internet, for me – and I think many others – they are a solace in the face of despair - or just a good laugh.

I've posted videos about cat thieves before but this one – well, if you live in Altoona, watch out for Jordan, the feline cat burglar who has a very specific fetish:

More about Jordan the shoe thief at Bored Panda.

”I HATE TO BE HYPERBOLIC”, SAYS DIGBY

When mainstream media continues to report on the president of the United States in normalizing language, political blogger Digby tells it like it is. For too long I have thought I was the only person not afraid to say this. 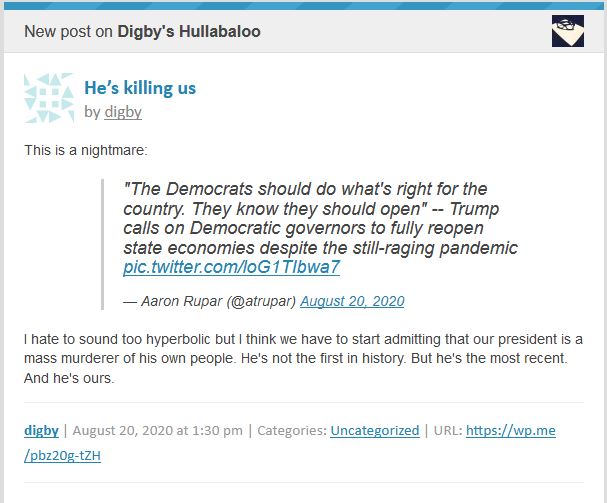 I take back what I said above about cat videos being a solace. So are pretty much all wild animal videos. This is a live stream brought to us by explore.org.

”Brooks Falls in Alaska's Katmai National Park is the best place in the world to watch brown bears feasting on salmon as they swim upstream to spawn,” reports the Youtube page.

Find out the best time to watch live and learn more about Katmai and its brown bears (and choose from many other wild animal cams) on Explore.org.

As usual, an eclectic selection for however we are feeling today. Smiled, frowned, was moved. Particularly enjoyed learning about Arstidir.
As usual and as always, thank you, Ronni.

That Icelandic hymn was downright enchanting, and Jordan the Shoe Thief—haha—just goes to show us that cats can do no wrong! :-)

This quote: “When mainstream media continues to report on the president of the United States in normalizing language” YES, EXACTLY. It frustrates the hell out of me! At least the good folks at MSNBC aren't afraid to express their disgust, but all they're doing is preaching to their choir.

And finally, I can’t stop watching those Alaskan salmon (and currently one bear) in the background; there’s something thrilling yet soothing about it at the same time. As always Ronni, thanks for this week’s stuff, hoping your day is an easy one.

The Icelandic hymn is so soothing....

I love the shoe thief. Shout out to Happy Kleptokitty on Facebook (aka Tigger) in Gladstone, OR who was a cat with a penchant for cleaning up the neighborhood, especially gloves. Unfortunately, he disappeared in June.

Pantanal otters, kitty shoe theif..............and YES! Let's get real..........I've wondered if Trump could be charged with genocide after he's out of office. You know, the Hague tribunal sort of thing? We have a fascist dictator who is killing us.

I'm cheering the "Old lives matter" but wishing she'd get off that ladder.

I love a good cat tale anytime, all the time.

I've been watching the Katmai bears for several years. I think it's the sound of the rushing water that makes it so soothing, but the bears, and especially the leaping salmon, are amazing.