WE FELL ASLEEP IN ONE WORLD

And woke up in another.

This was written by British-born, Pakistani singer-songwriter, Harood Rashid and has been making the internet rounds for about three or four months. There are now dozens of video interpretations (just search “we fell asleep in the one world” at Youtube for more of them).

TGB reader Joan McMullen sent it and I like this version of the video.

PLACING BLAME WHERE IT BELONGS

People who have lost love ones to COVID-19 are more frequently placing blame in the obituaries they write. TGB reader and political blogger extraordinaire, Jan Adams, sent this one which I believe may be the first. 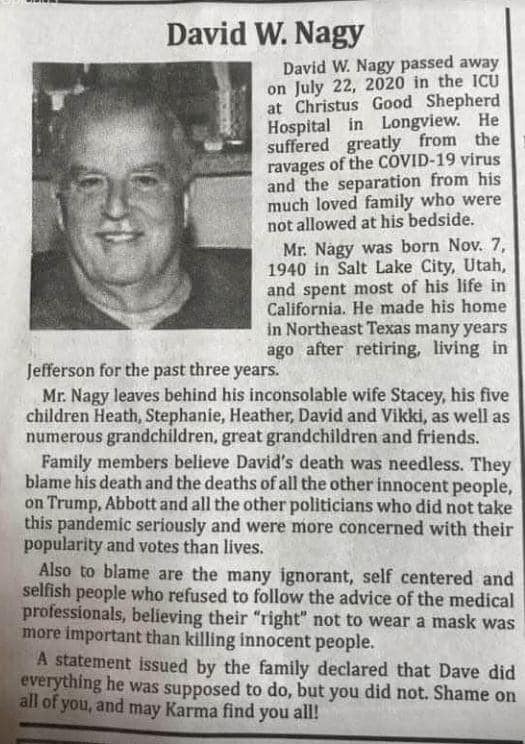 The number of obituaries with political messages has been increasing as the pandemic continues. The Washington Post has covered the phenomenon.

We have always known the president is only semi-literate but his errors and gaffes have been increasing in number and they get funnier. Here are two he delivered this week when he tried to read the words Yosemite and Thailand.

Fairly regularly the polling firm Gallup asks the broad question, “How are things going?” Here's what they have to say about the results of the latest survey:

”Americans have rarely been less satisfied with the state of the nation than they are now. Although the public does not have to be highly satisfied for incumbents to be reelected, the current level of satisfaction sits well below the low-water mark (33%) at which an incumbent has won reelection in the past.

“An even more troubling sign for the current president is that satisfaction is significantly lower now than it was in 1992 (22%) when George H.W. Bush lost his bid for a second term.”

That sounds bad enough but I found it shocking when I looked at the graph:

More information at Gallup but don't make this an excuse for complacency.

ONE MAN'S WALK AROUND THE WHOLE WORLD

”Tom Turcich of New Jersey and his adorable pooch Savannah have walked over 18,000 miles through the United States, Mexico, Costa Rica, Chile, Italy, Turkey and dozens of other countries over the past five years.

“It’s been a life-changing adventure. They’ve survived hardship, and they’ve experienced the kindness of strangers along the way. And they’ve still got miles to go.”

My friend Tony Sarmiento sent this photo. He is a cat person (of course he is): 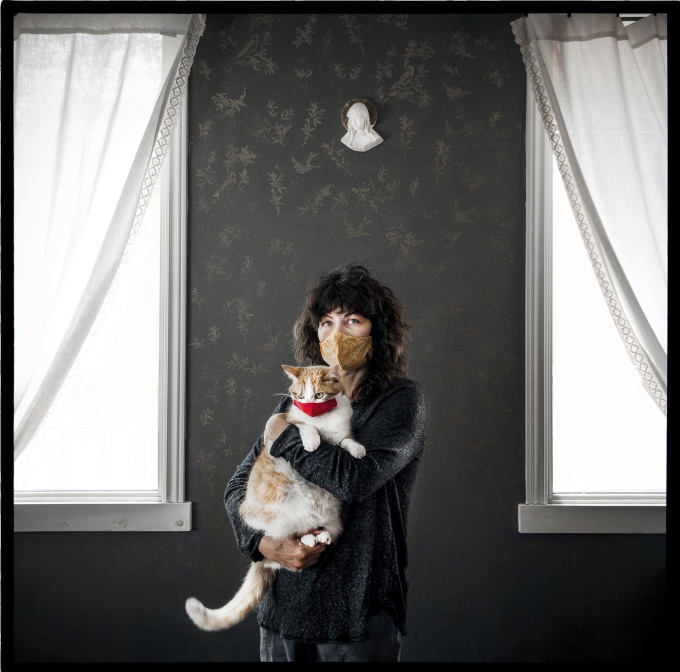 The photograph, by John Hryniuk, is from a collection of faces of Toronto citizens during the pandemic published at the Washington Post.

PENGUINS AND A BUBBLE MACHINE

I have read a bunch of stories lately about how bored zoo animals get without visitors to entertain them. Here is another. The Youtube page reports,

”Penguins who couldn't be entertained properly at a zoo during lockdown have been cheered up - with a bubble machine...Staff at Newquay Zoo in Cornwall were trying to find a way to keep them entertained, and then someone kindly donated a bubble machine.”

TGB reader Joan McMullen is back again, this time with video of an extraordinary young man who builds an astonishingly elaborate dog house for four abandoned puppies.

As much as I enjoyed these animal videos (a big shout-out to Joan, thank you) the last video with the 4 puppies... that was pure magic. And to think I was patting myself on the back this morning for hanging a new smoke alarm in my bedroom...

Um, normally I sympathize with anyone who mispronounces formal (or foreign) nouns, but Trump is just sloppy, lazy, ignorant. I suspect he's even worse than we want to believe! Anyway, thanks for this week's stuff Ronni. I hope you're feeling well.

I felt sorry for the families loss until I read may karma find you all. What a horrible thing to write in someones obituary.

I still commiserate with the family for their loss and they may already regret injecting blame into his obituary.
In my career, I spent a whole lot of effort treating conditions I had previously warned people against, and I wasn't always as kind about it as I might have been.
I'm trying to think how I would feel if I lost a loved one treating one of the folks I see still out there now swarming like bees. I think forgiveness would come hard. I don't know how I could ever see it as a fair exchange.

So much wonderful and soul food! Loved it all. Especially the man building the home for the puppies............who will out grow it fairly soon? As I watched I couldn't help thinking..........it's the more "primitive" or indigenous cultures, so long thought of as second or third best, who well may lead those of us who are left into the future. Time is never "wasted" watching these wonders.

A particularly wonderful tiramisù feast today, dear Ronni. Thank you so so much.

The cat wins, of course--they always do with me. The puppies are a close second, though.

I might not have added that last sentence to Mr. Nagy's obit, but I can certainly understand why the family did. The would-be Emperor of tRumpistan has to go down in history as the most incompetent, uncaring, thoughtless, irresponsible, semi-verbal, borderline-illiterate president this country has ever produced.

His tRumpuppets have surely played a part in spreading the coronavirus. (Hey, folks, what isn't "real" about 160,000+ dead Americans and ICUs overwhelmed by critically ill patients?) Their denial behavior has resulted in many needless deaths, likely including Mr. Nagy's. The coming election must be regarded, literally, as a matter of life and death for many of us, for the country and quite possibly for democracy itself. tRump CANNOT win a 2nd term!

Ronni, thanks for your timely inclusion of the cat with a mask in Toronto (the other photos in that exhibit are also stunning). Today, August 8, is International or World Cat Day, created in 2002 by the International Fund for Animal Welfare. From the Fund's website about the explosion in Beirut: "Human relief agencies are rushing to help the people affected by the explosion, and we're rushing aid to the animals. We’ve proudly partnered with Animals Lebanon for years, including supporting them during the ongoing COVID-19 crisis."

I understand Mr. Nagy's family and while it may seem cruel what happened to him is as well.

I had received the dog house in the mail, played it twice with a big smile across my face.

I liked the obituary and am glad they told it like it is. Every week lately I have encountered a maskless individual, not social distancing, in places I cannot avoid. All of them have been older men and 2 out of 3 smirked or made a joke about it. I try to keep quiet for my own safety but selfishness needs to be called out for what it is. There is a mask mandate here but it's not enforced. People are dying because of this.

As always, full of treats and insight.

In response to the video about the man walking around the world, let me suggest Paul Salopek's Out of Eden walk, which we have followed from day one and have been mesmerized by, more here:
https://www.nationalgeographic.org/projects/out-of-eden-walk/