ELDERMUSIC: A Soupçon of Ellington 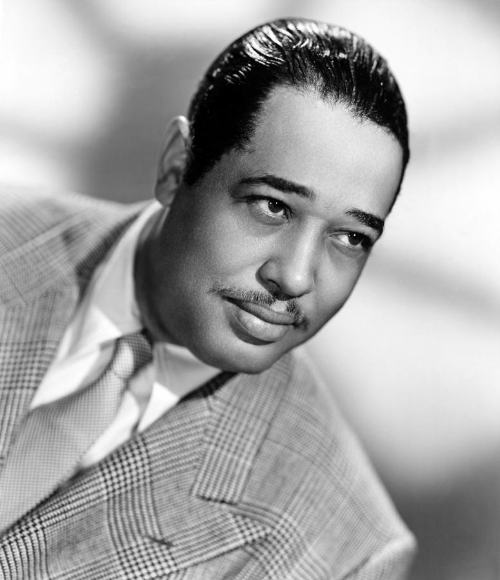 This is not an overview of DUKE ELLINGTON’s career; that would take several columns. Instead I’ve selected mostly small groups, rather than his orchestra because that’s my preferred option.

Also, most of the selections feature other famous jazz musicians, so if you like piano jazz in small combos, this is for you. 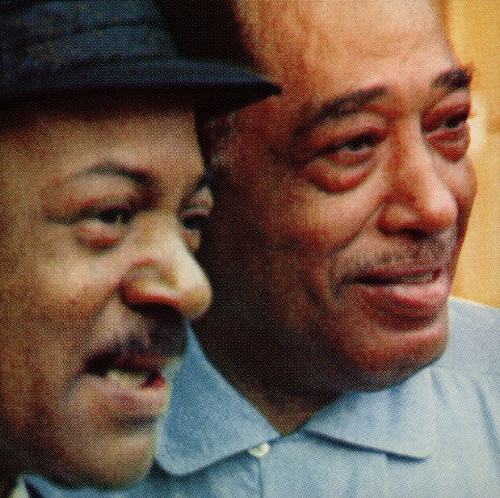 Duke made one album with COLEMAN HAWKINS, but what a fine album it was. It has the prosaic title “Duke Ellington Meets Coleman Hawkins”. This was from 1962 and it’s surprising it took so long as Duke had been asking Hawk to collaborate for a couple of decades or so.

One of the tracks is a reworking of Duke’s Mood Indigo. 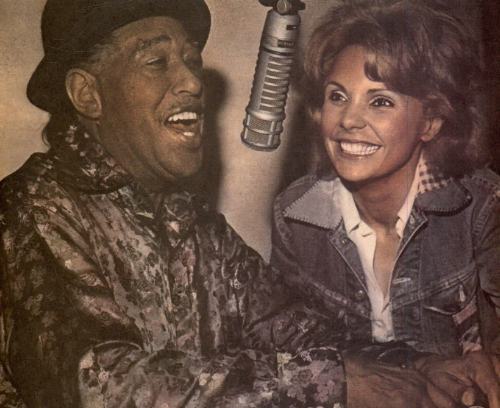 I always think of TERESA BREWER as a fifties pop singer, but there was more to her than that. In 1973 she recorded with Duke in what turned out to be his last recording session. That album is called “It Don’t Mean a Thing if it Ain’t Got That Swing”.

From that we have Satin Doll, a song Duke wrote with Billy Strayhorn and Johnny Mercer.

Probably the most famous song associated with the DUKE is Take The A Train. It was written by Billy Strayhorn, a regular composer and arranger attached to the orchestra. The most famous version was recorded in 1941, but the one I’m featuring is just Duke with a drummer (Ben Riley) and bass player (Larry Gales).

♫ Take The A Train 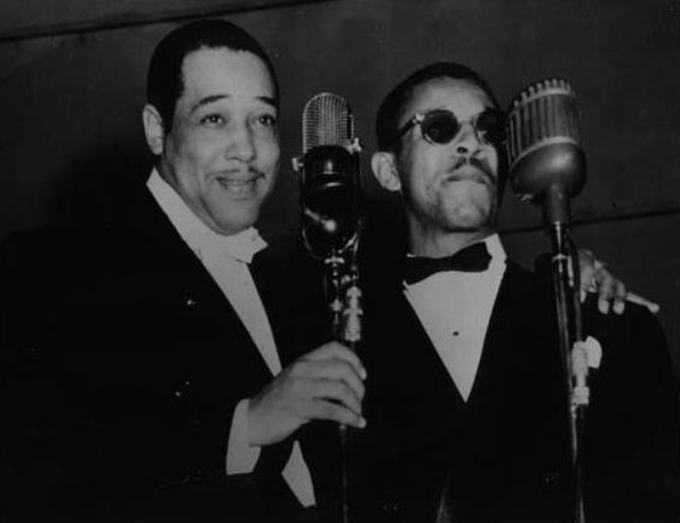 Do Nothin' Till You Hear From Me was written as an instrumental by Duke back in 1940. Later Bob Russell wrote words to it and it’s been recorded by just about every good singer around (and a few not so good ones, I imagine).

One of the best of those is AL HIBBLER. Al is generally considered the finest male singer who performed regularly with Duke’s orchestra. He later sang some of the finest ballads in the fifties

♫ Do Nothin' Till You Hear From Me 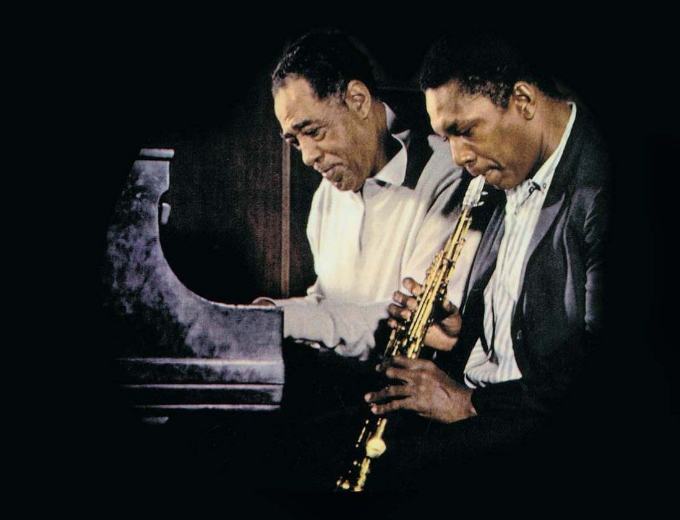 As with Coleman Hawkins, JOHN COLTRANE only made one album with Duke. That’s a real shame as this is a really fine record, and I suggest that you look out for it if you’re interested in jazz. It’s another with a prosaic title: “Duke Ellington & John Coltrane”. From that album here is Stevie. 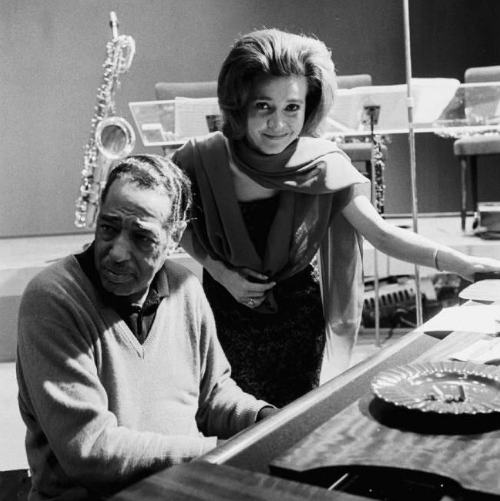 C Jam Blues is another of Duke’s famous tunes. Everyone who is anyone in the world of jazz has recorded it. It’s usually an instrumental, but several folks put words to it and turned it into a song.

ALICE BABS, who was Swedish, and the Duke recorded an album together (“Serenade to Sweden”) which featured the tune (although the words aren’t readily discernable). To my ears Alice listened closely to Lambert, Hendricks and Ross. 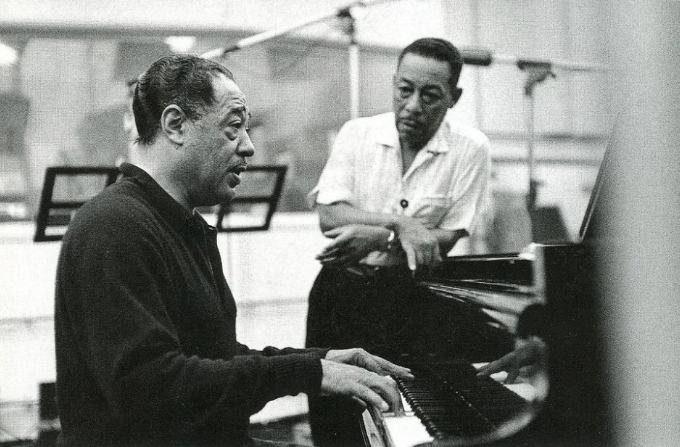 Unlike a couple of others in today’s column, JOHNNY HODGES and Duke Ellington made a couple of albums together. The one we’re interested in is called “Back to Back”. “Black, Brown and Beige” was an extended jazz suite that Duke wrote and he and his orchestra performed it Carnegie Hall in 1943. Besides the recording of that concert, Duke also recorded the entire work in the studio with MAHALIA JACKSON on vocals.

There were a couple of alternate takes of some of the tracks that were included on the album. From that here is Part IV, also known as Come Sunday. 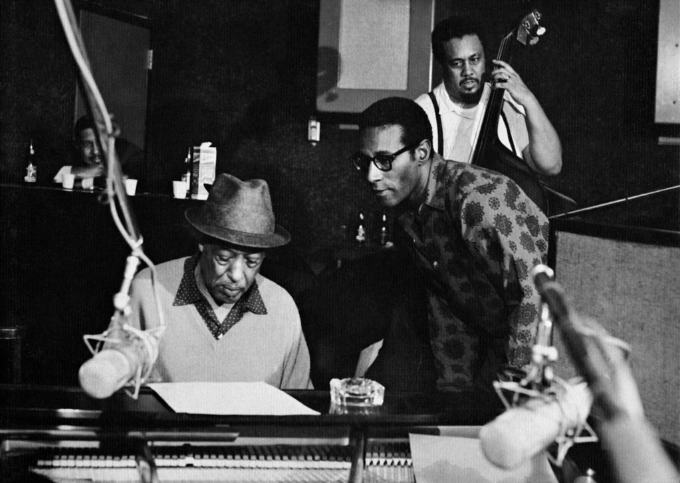 Duke gets a bit more avant-garde than usual when he teams up with CHARLES MINGUS and MAX ROACH. It almost crosses over into free jazz. There were no rehearsals and everything on the album was the first take.

They were contracted to record a second album but tensions were so fraught among the musicians that it didn’t eventuate. From that first and only album here is the title track, Money Jungle. 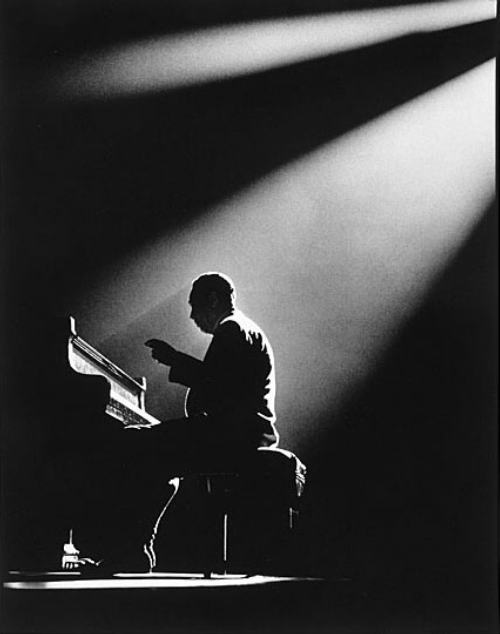 I’ll end with DUKE on his own – you can’t get a smaller group than that. He plays Solitude.

“So if you like piano jazz in small combos, this is for you.” That is just how I like it, I almost wish this had been posted late Saturday night rather than Sunday morning, just seemed more fitting a time for the Duke :^)

I sure enjoyed “Mood Indigo” and “Solitude” (a sweet one to end things on, “Money Jungle” had a frantic, anxious feeling about it)—but boy, does “Stevie” sound good on my laptop speakers!

Peter, thanks for yet another Sunday of good music.

Thanks so much, Peter. Can't say how unfailingly valuable your page is, especially today since it's impossible ever to get enough Ellington.

Columbia University's FM station celebrates the birthdays of about a dozen jazz musicians by marathon-streaming/broadcasting their music the whole 24 hours. Ellington's birthday is 29 April.

You just missed Monk's, 10 October. Louis Armstrong singularly had two birthdays, the day he was born, 4 August, and the day he thought he was born, 4 July; WKCR celebrates both. The station's other claim to fame is its annual Christmas to New Year's marathon Bach festival.

I hate to be an old codger about it, but they just don’t make music like they used to. “Mood Indigo,” “Take the A Train,” and then ending with the lovely notes of “Solitude.” This was a very nice Sunday treat, Peter.

Can't miss showcasing jazz with Duke Ellington tunes. Enjoyed these selections but getting here late (or early since I need to get to sleep) so will have to come back again to listen to all of them. Coincidentally, I had just mentioned Ellington on my blog in relation to a song he reportedly said was his favorite, "Indian Summer" which he recorded with Frank Sinatra. Sinatra first sang it when he was the boy singer with Tommy Dorsey's orchestra. The tune had been composed by Victor Herbert for piano, then years later lyrics were added. A number of good vocal versions out there including Ella Fitzgerald, Sarah Vaughn. Thanks again for your music here.

I always tell people that Duke Ellington is one of the greatest composers of the 20th Century whatever the genre. I have most of the albums you pick from and many others. I came to love Duke's music when I was around 15, so I've been listening to him almost 60 years now. I've seen him play twice in that time, once in the 60s and once in the early 70s. I probably still have the programme for the second concert. I also saw Mingus and Max Roach when they toured with Dizzy Gillespie and Thelonius Monk. I can't remember the details of the music but I still remember the enormous energy that roared out from the stage.

Of the ones you list, I find it almost impossible to pick a favourite. I've recently been listening to Money Jungle a lot though and it makes you realise just how great a musician the Duke was, endlessly adaptable and often well ahead of musicians we now think are modernists. If you listen for example to the orchestration behind Mahalia jackson in the studio album you hear music Stravinsky would have been happy to write.

Although outside your focus on small groups I would pick two other tracks. The first is the Diminuendo and Crescendo in Blue with Paul Gonsalves which for me is a classic example of the rowdy tenor improvisations that are almost a stereotype of that era and which the Guardian described as one of the great moments in jazz. I've loved it since I first heard it in the 60s.

The second would be anything from Duke's tribute to Blly Strayhorn And his mother called him Bill I actually picked my copy up in a supermarket remainder bin, but I always find it so intensely emotional that I almost have to ration my listening to it.

Thanks for this great selection from one of the all time greats of music of any time.

Many thanks, Peter for another great listening. We particularly liked the trio version of Take the A-Train - hadn't heard that before.
All the best, Mary Evans Young and Derek Evans.