Inevitably on a blog about aging, some of our blog friends die. It’s part of what “it’s really like to get old” means.

They say that nothing ever goes away on the internet, but you can’t be sure that in time unattended blogs won’t disappear. So this is small memorial to those who are no longer with us.

The blog images link to the blogs. If you search their names on Time Goes By, you’re likely to find some stories and other references about these people. 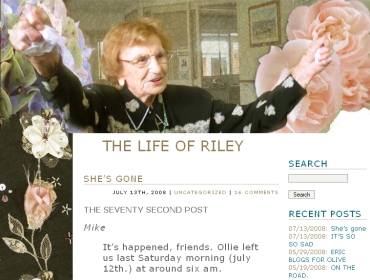 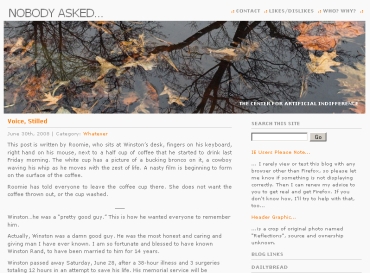 This is so very nice. Thanks, Ronni. And thanks, Grannie Annie, for the idea.

What a lovely idea. Thanks Ronni, and to Granny Annie for suggesting it. I hope I'm not on there for a long, long time.

Another outstanding idea, Ronni.
I must get busy and make sure I have info about this site available for my family if I "ever" need it. ;)

A great idea to be able to revisit these friends.

Death can be beautiful when it binds those yet living more closely together, when it revives memories of a life which in its totality displayed a richness of texture and a strength of design in which the selflessness, tenderness compassion and generosity were merged. Death can be beautiful when in coming it opens the doors of life again - a life revealed in God's beyond and evermore.

Death can be a gift, a reward, a promise fulfilled, the essence of God's love. The sorrow itself, that trails the wake of death, is a quality and measure of love that is creative in that it requires us to re-examine the values we hold. It causes us to question the validity of our lives, it opens our hearts to renewed appreciation of those whom we still have to love and underscores the possibility of unpredictable loss.

Poem I wanted to share here that my mom wrote concerning death.

Thanx Addie, for such a really FUN read!!! wonderful altitude w/o being too lofty.!!!

My son has been in a rehab/nursing facility healing a broken ankle on one foot and fractured toe on the other for the past 2 months. While he will be coming home shortly, most of the residents won't--they're nursing home clients. Visiting him frequently has plunged me into a constant reminder of death and its alternative and I must say death is more appealing. I only wish I was not afraid to take control of the process....I just realized I have a lot to say on this subject, so I won't clutter up your blog, but will write on my own.

The memorials are a good idea , of course. I love this blog.

Hello Ronni from Paris(France, in Europe, yes, still there!), it is a beautiful idea. Did you notice that the blog of Winston Rand is leading to a dead end (if it is how to spell it)?
Cheers. My blog was mentioned in a very popular French Magazine named l'Express in a special issue about 50 something and I am very proud of that!

Thanks for giving us this space...even for those who live behind a wall.

They will be remembered as long as the site is here.