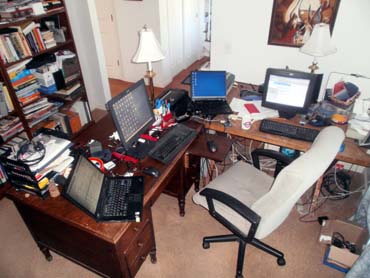 South County is sort of a Rhode Island thing. Officially I live in Washington County but absolutely nobody calls it that; everyone calls it South County. It's coastal Rhode Island from the Connecticut border to Narragansett Bay.

This is my workplace which I generally refer to as either my den or my office. I work from home for a century-old, high-tech company known by its initials.

The two computers on the left are my work computers and the two on the right are my personal computers. The rightmost one is the elderly desktop computer that I use for jimsjournal and the laptop next to it is one I use for other writing.

Delightful to meet you in such a neat office.

Not sure you have enough computers there, Jim! Looks like you've got a nice chair, though. :)

And I bet you know exactly where everything is that you need. I envy people like you! :-)

Everything looks like it's in just the right place, Jim. Looks a lt like my office but I call mine the living room. Great blogging!