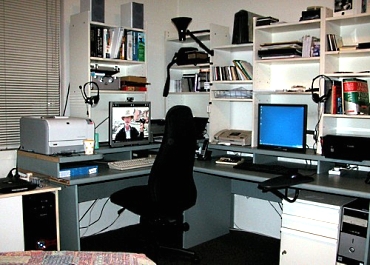 When my husband was alive, the entire computer setup was in what is now my bedroom. It was all in a line, filling one wall: Chic's printer, his PC, my PC and my printer. Like a glove, it all fitted - well, as Chic designed and had made the benchtop, that's not so surprising.

A few years after he died, I swapped the study and the bedroom because I wanted to sleep where he spent most of his last years - at his computer. It wouldn't all fit along one wall in the other room, so it's been cornered, so to speak. I now have a window on my left that gives onto the balcony but I have to keep the venetians partly closed to cut down the glare. That's Oz for you.

I've a new PC for Windows7 now but the other remains on WindowsXP. My web-authoring and image-editing software won't run on anything else. You're right - they're getting on, too.